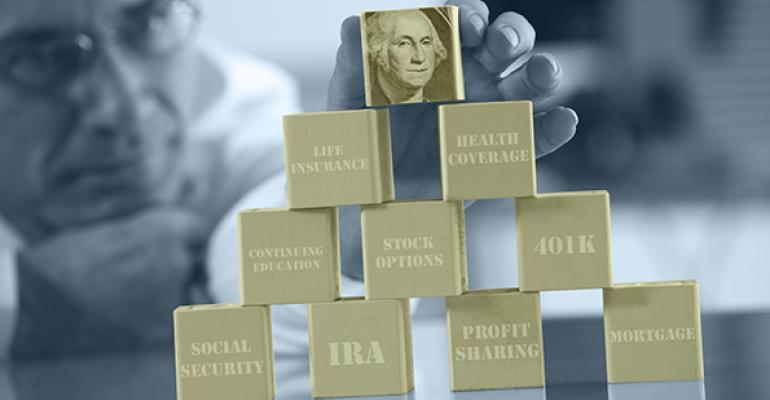 In our last article, we took on the complicated topic of taxation of Social Security (SS) benefits. We now examine some the problems associated with SS benefits and how the creative use of life insurance can help fix these issues.

Most families have to rely on their combined SS retirement benefits to maintain their standard of living.  Let’s look at a typical situation.  Your client and his spouse are both age 50 and are beginning to think about retirement.

The foundation of their retirement program will be the benefits provided by SS. Assume they each have a projected retirement benefit of $2,000 per month at their full retirement age (FRA)— age 66.  They plan on deferring retirement until age 70, so that they’ll earn their 8 percent deferred retirement credits.  This will increase each spouse's retirement benefit to approximately $2,640 per month.  In addition, they’ve been shown how one spouse can receive a spousal benefit of $1,000 per month (plus cost-of-living adjustments (COLAS)) from age 66 to age 70. Doing this won’t reduce their combined benefits beginning at age 70.  Check out some of our previous columns to learn how this happens.

Because SS benefits are entitled to COLAs starting at age 62, your client and spouse expect to each have a retirement benefit of at least $3,000 per month beginning at age 70.  This will give them a combined total benefit of $72,000 per year.

But there’s one area of concern: What happens to their retirement benefits when one spouse dies?  Assuming they’re both past age 70, at that time, the SS retirement benefit would be the higher of the two benefits, and the net household benefit will be reduced from $72,000 to $36,000 per year.

The problem is that many of the costs of living—such as the household mortgage—will remain unchanged.  Thus, there will be $36,000 less in income to cover the fixed expenses.

If possible, your client and his spouse would like to maintain the $72,000 amount as long as either spouse is living.  They feel this will allow the surviving spouse to offset emergencies and maintain their standard of living.

The life expectancy for someone age 70 is approximately 17 years.  A fund of approximately $450,000, growing at 4 percent should generate about $3,000 per month for 17 years.  Perhaps they should consider creating an asset of $450,000 to be available at the death of the first spouse.  The ideal asset for this would be life insurance.  But they don’t know which spouse will die first, therefore, they need to consider separate $450,000 policies on both the client and spouse.  Thus, when the first spouse dies, the $450,000 of life insurance will provide the funds necessary to offset the $36,000 reduction in SS retirement benefits.

Remember that when the first spouse dies, the surviving spouse will still own the other policy.  If desired, the surviving spouse could possibly use the existing cash value to provide additional retirement income or simply maintain the policy to provide a tax-favored $450,000 bequest to their children.  It’s considered tax-favored because the life insurance death benefit typically isn’t subject to federal/state income tax.  In addition, for most people, it’s unlikely that their estates will exceed the federal estate tax exemption, so there would be no federal/state estate or inheritance tax.

Using Life insurance to Enhance the Benefit to Children

Let’s look at another example.  Assume your client and his spouse have just reached their FRA of 66.  Your client has a primary insurance amount (PIA) of $2,000, and the spouse’s PIA is $1,000.  Unlike in the previous example, in this case, they’ve accumulated a substantial amount in their 401(k) plans, and they feel the income from their 401(k) and other assets will provide sufficient retirement income to maintain their standard of living during their lifetime.

As with the previous case, your client will file and suspend his SS benefits until age 70.  The spouse will receive her $12,000 per year spousal only benefit from age 66 to age 70.  At age 70, your client and his spouse will both receive their enhanced retirement benefits.  So, his benefit will be $31,680 per year, and her benefit will be $15,840 per year.  The combined benefit (before COLAs) would be $47,520 per year.  As we saw in our last column, the taxation of SS is complicated, but after tax, this would be about $31,400.

They want to use about 50 percent of their SS income on discretionary spending.  They would like to invest the other 50 percent for their children.  One way to enhance the amount going to the children is to use a survivorship life insurance policy on your client and spouse.  At the death of the surviving spouse, the death benefit would provide the enhanced bequest.

How much would all this cost?  Under current policy and underwriting assumptions, less than half the after-tax SS income (assume $12,000) would be sufficient to pay the premiums for a $750,000 policy with the death benefit continuing until age 121.  Keep in mind though, the cost of the policy could be significantly higher (or not available at all) if either spouse is in poor health.

This is likely to be better than they would get if they had simply taken 50 percent of the SS income and invested it.  Assuming the second spouse dies in 20 years, the after-tax internal rate of return on the insurance policy would be approximately 9.5 percent, higher if the second death occurs sooner, lower if it occurs later.  On the other hand, if they simply reinvested the after-tax benefit at 4.5 percent after tax, the children would get approximately $393,000.

The SS income will increase over the years as COLAs are declared.  Anything over the amount allocated to the premium could accumulate in a side fund.

In our next column, we’ll take a more detailed look at how best to plan your client’s after-tax retirement income with a variety of financial products.