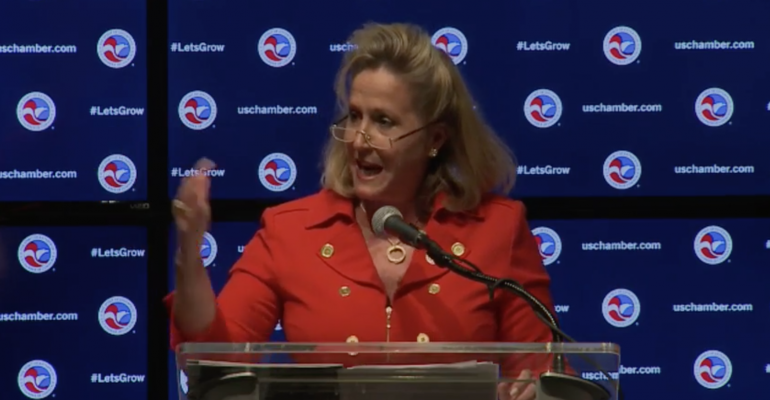 How Rep. Ann Wagner’s Upbringing Shapes Her Fight Against the Fiduciary Rule

“I wish more of my colleagues and more elected officials, quite frankly, have signed not just the back of a paycheck, but maybe the front of one,” Rep. Ann Wagner said.

Rep. Ann Wagner (R-Mo.) introduced a bill in July that would repeal the Department of Labor’s fiduciary rule and replace it with a best-interest standard under the Securities and Exchange Commission. But why has the congresswoman taken up the fiduciary issue and become a strong voice in the fight against the fiduciary rule? Her upbringing in West St. Louis County, Missouri, provides some clues.

“I grew up in a small retail business,” Wagner said, speaking at a U.S. Chamber of Commerce event on the DOL rule. “I worked for my daddy in his carpet stores from the age of 12 on in West St. Louis County.”

Working for her father, Wagner said, she learned a good work ethic, the value of a dollar and how to deal with the retail public.

“Probably most importantly, what I learned from my father and in this business, as a I watched him as a young girl growing up, he would pound every countertop, desktop, table, podium, whatever it was, and I’d hear him shouting, ‘Ann Louise, all I want is for government to be out of my way and off my back,’” she said. “All that he wanted was to provide goods and services to his community, take care of his employees, and provide for his family. And it was in that order.”

Many government officials, however, don’t have that experience.

“I wish more of my colleagues and more elected officials, quite frankly, have signed not just the back of a paycheck, but maybe the front of one, understood how to read a P&L statement, balanced a budget, hired and fired people, and knew what it was like to deal with the overburdensome levels of government at all levels.”

Like her father, Wagner believes most brokers are trying to do right by their clients. The DOL rule, she argues, harms low- and middle-income savers and just adds an unnecessary level of regulation for small businesses.

“I hate to see this become what it has become, which is a political football,” she said. “It really affects those low- and middle-income investors across the board. And if we get this wrong, it will only serve to exacerbate the current savings crisis.

“You have your customer’s best interests at heart—of course you do," she said. "My father did to the people that he sold to. If you don’t, you don’t stay in business. Yes, there are bad actors in every business, sadly. But I refuse to let anybody characterize those that are out there trying to help people save for the future as snake-oil dealers, or that they don’t have their customers' or their clients' best interest at heart.”