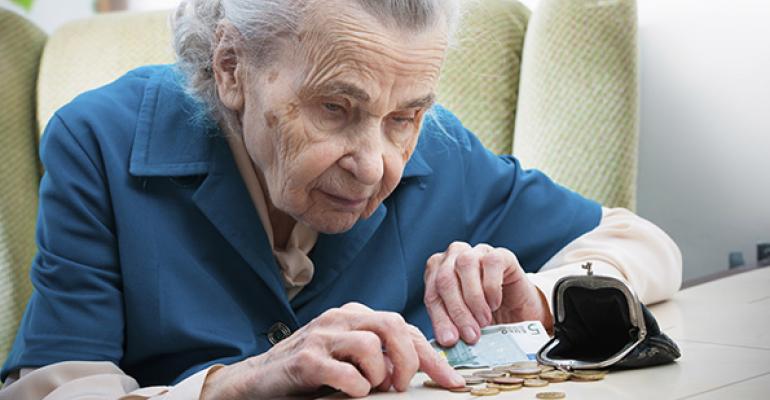 (Bloomberg) -- You’re traveling across the desert, feeling parched and looking dirty. You take a long drink of water from your canteen, then wash your face with the rest. As you’ll discover before you die of thirst in a day or two, you just made a huge mistake.

Outside of cartoons, nobody is this stupid. But people make the same kind of mistake all the time, putting their current happiness (vacations, flat screens, new cars) way above their future well-being.

Economists call this kind of irrationality “present bias.” And according to a National Bureau of Economic Research study, it and other biases are holding back millions of Americans from saving enough money for that ultimate future need: retirement.How much money? Try $1.7 trillion on for size. That's 12 percent of the $14 trillion in U.S. individual retirement and 401(k) accounts.

Another error economists worry about is “exponential-growth bias.” This is the failure to realize how savings compound over time. Save $100 at a 7 percent rate of return, and you’ll have only an extra $7 next year. But the gains compound year after year. In 10 years, your investment will nearly double and be growing at $14 a year. In another 10 years, it will almost double again and be yielding $27 a year.

Some people have a hard time wrapping their heads around this concept. They think of money as growing in a linear way, by more or less the same amount each year. And that makes saving and investing seem much less attractive than the trip to Cancun or the 40-inch television.

The researchers looked at survey data to try to figure out how many people are afflicted by more serious versions of these two biases. To find their “exponential-growth bias,” people were asked to predict how much an asset would increase over time. About seven in 10 underestimated its growth.

To test their “present bias,” respondents were asked such questions as: “Would you rather receive $100 today or $120 in 12 months?” For those not interested in waiting, the survey raised the stakes: What about $130 in 12 months? After analyzing the answers, researchers classified 55 percent of people as “present biased” on money matters.

What do a bunch of math problems and hypothetical questions have to do with the real world? The study, which appears in the NBER’s Bulletin on Aging & Health this week, found there was a strong relationship between respondents’ biases and their retirement account balances. The more biased they were, the less they'd saved in a 401(k) or other account. The connection held up even after researchers controlled for income, education, intelligence, and financial literacy.

If somehow you could eliminate these two biases, retirement savings would immediately jump 12 percent.

Of course, it’s not easy to wipe away irrational behavior. (We've all streamed another Netflix episode rather than go to sleep, knowing full well we’d regret it in the morning.) It may help, however, simply to be aware of your own shortcomings. The study tried to measure self-awareness and found a link to higher retirement savings.In other words, if you know you’re prone to doing something stupid, you may be more likely to ask for help. Or sometimes you can essentially trick yourself into doing the right thing: For example, to combat present bias, you might agree to have your 401(k) contribution automatically increased not now but early next year—just as your annual raise (assuming you get one) goes into effect.

Then you can rely on that other shortcoming many of us share: forgetfulness.