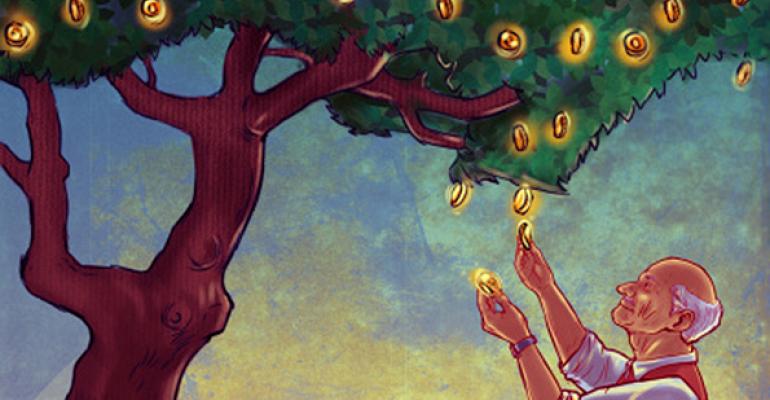 Four Ways to Save for an Early Retirement

Those wanting to quit before turning 60 should think beyond 401(k)s and IRAs.

Zero-coupon tax-free municipal bonds may be more volatile than savings bonds or other zero-coupon Treasuries. But don’t dismiss the eventual payoff: A 3 percent tax-free yield is equivalent to 4.6 percent for a client in the 35 percent federal income tax bracket.

Whether it’s due to rising portfolio values, increased job insecurity, or easier access to privately-purchased health insurance, there’s a good chance that younger, financially-secure clients are going to tell you that they want to retire early.

But it’s difficult for clients to tap at-work retirement accounts before turning 59 ½, and Social Security isn’t available to most people under age 62. So most of these early retirees are going to need alternate funds to cover living expenses before traditional sources of retirement income kick in.

Here are four savings vehicles current workers can use to bridge that prospective gap:

Roth IRAs are great ways for eligible clients to defer taxes on investment earnings until the clients reach 59 ½, when distributions will ostensibly be tax-free. In addition, there is no required minimum distribution at age 70 ½, and the distributions aren’t included when determining if Social Security benefits are taxable.

But there is another potential lesser-known benefit to both workers and early retirees in the near-term: Roth IRA contributions can be withdrawn from the accounts at any time for any reason with no taxes or penalties. The regulations also allow clients to declare any withdrawals as “contributions,” until they’ve withdrawn an amount equal to what they’ve put in.

For example, say a married 40-year-old couple contributes $5,000 annually to each of their Roth IRAs for the next 15 years, and then they plan to retire at age 55.

Keep in mind that Roth IRAs can be opened and funded for spouses who don’t have earned income, as well.

However, not all working clients can deposit money into a Roth IRA. For the 2014 tax year, the modified adjusted gross income (MAGI) limits for married couples filing jointly are $191,000, and $129,000 for singles. Those wishing to make a full Roth IRA contribution must have a MAGI below $181,000 for married couples, and $114,000 for single filers.

Clients at all income levels can and should consider these ultra-safe vehicles, but they will work especially well for early retirees.

The interest earned on Series I savings bonds can either be “declared” (and taxed) annually, or left to accrue until the bonds are redeemed. In the latter scenario, taxes are avoided. Therefore, clients who are now in higher income tax brackets can purchase the bonds and defer the taxation on the interest until they need the money, and by definition will likely be in a lower income tax bracket.

The bonds have two components that determine the interest rate. The first is a flat fixed rate that remains constant over the life of the bond.

The second part is a variable rate that is tied to the Consumer Price Index, and can be adjusted every six months on May 1 and Nov. 1. The most recent annualized interest rate was 1.94 percent, and that rate is exempt from state income taxes.

Technically, these bonds have a 30-year maturity, and it’s difficult to get the money back out within 12 months of the initial deposit. But after one year of ownership, the bond owners can cash the bonds in with a penalty of just three months’ worth of interest. After five years of ownership, the bonds can be redeemed with no penalty.

The bonds are available for direct purchase at www.treasurydirect.gov. Buyers are limited to purchasing $10,000 in bonds per person, per calendar year.

Savvy savers wanting to accumulate more money in the Series I bonds can have any federal tax refund under $5,000 issued in the form of a Series I savings bond by filing Form 8888 with their federal income tax return.

By definition, clients who are able to retire early may not qualify to make Roth IRA contributions, or may have more money to save than the maximum allowed with savings bonds.

These clients can still establish a tax-advantaged early retirement plan by purchasing zero-coupon tax-free municipal bonds, maturing in years after they plan to retire but before reaching ages needed to get at retirement plan accounts and Social Security.

For instance, a 40-year-old wishing to have $100,000 coming due in 15 years could today deposit about $64,000 into a zero-coupon tax-free bond yielding a hypothetical 3 percent annual return.

These bonds may be more volatile than savings bonds or other zero-coupon Treasuries. But don’t dismiss the eventual payoff: A 3 percent tax-free yield is equivalent to 4.6 percent for a client in the 35 percent federal income tax bracket.

And unlike using a traditional bond or stock mutual fund, the longer that the client waits to redeem a zero-coupon bond, the more likely it is that he will get his initial investment back, and then some.

If the client also has a decent appetite for reward and can take some risk, they should consider a specific type of mutual fund that invests in stocks, bonds or both.

These tax-advantaged funds are designed to limit the taxable gains and income distributed to investors, ideally until the shareholders sell the funds.

Once they retire early, they can sell the funds as needed. If the laws stay the same and the clients’ federal income tax bracket is 15 percent or lower, the long-term gains realized could have a zero percent tax rate.

In the meantime, workers won’t have to worry as much about the gains or income adding to their tax bill. Yet they can benefit from any realizing losses to help offset taxable gains and income from other sources.

In the next column, we’ll move on to more sophisticated strategies to fund an early retirement, with ways clients can avoid penalties while tapping tax-deferred retirement accounts prior to age 59 ½.