ADVERTISEMENT
1. HSAs: The Next Frontier for Retirement Planners
zimmytws/iStock/Thinkstock

The underutilized benefit of Health Savings Accounts as a retirement planning vehicle was a hot topic at the NAPA 401(k) Summit. Currently, some $35 trillion reside in the accounts, offered alongside high-deductible insurance plans. Republican lawmakers want to expand them, doubling contribution limits and making them easier to pass on to heirs. “The market is going to blow up,” said American Retirement Association president Brian Graff. In many ways more flexible than 401(k) plans, they allow for tax-deferred investments rolled over annually if not used and withdrawn tax free for medical expenses (expenses expected to cost an average $260,000 for a typical retired couple, according to Fidelity.) At age 65, withdrawals for any reason are taxed at normal income tax rates, just like an IRA. Retirement plan advisors are pushing to get HSA balances on the same platform as 401(k) accounts to use both “holistically.” Advisors who use them suggest funding a 401(k) up to any employee match, then maxing out contributions to the HSA before turning back to the 401(k) for any additional savings.

There is a 90 percent chance the Trump administration will succeed in getting the Department of Labor (DOL) fiduciary rule delayed, at least by 60 days, before the April 11 applicability date, said Brian Graff, president of the American Retirement Association. That might buy time to get another delay through, but “the drip, drip, drip of delays, it’s like waterboarding,” said Graff. Even with a delay, the DOL doesn’t have enforcement authority over whether a tort lawyer brings a class action lawsuit against a firm under the new rules. According to Graff, Congress could create new regulations overturning the rule, but no one can predict what’s going to happen and that’s a problem. For many firms looking at influencing a revision, the private right of action is the key sticking point. “There are other ways to ensure people act properly,” said Graff.

Even more so than the Department of Labor fiduciary rule, it’s the GOP-proposed tax reforms which keep Graff “in a permanent state of anxiety.” The fear is that lawmakers will cut 401(k) deferral limits to pay for other tax cuts promised by the Republican majority. The last time there was major tax reform, in 1986, deferral limits on 401(k) contributions were reduced by 70 percent.

Despite a push to make environmental, social and governance funds a thing for socially minded investors, a trio of plan sponsors speaking the NAPA 401(k) Summit said they do not offer them in their 401(k) plans, and as far as they knew, no participant was demanding access to these kind of funds. “No, and no,” said Cott Corporation benefit executive Katie Drayo, when asked if they offered the funds, and if participants had asked for such options.

5. Stop Saying “We Focus on Our Clients”

In a survey of financial advisors, 80 percent said that a focus on clients was what differentiated their firm. “Think about that,” said author Scott McKain during a NAPA Summit keynote presentation, “80 percent said the exact same thing differentiated them.” Instead of indulging in clichés, advisory firms truly intent on differentiation need to be clear and articulate on what they do — and more importantly what they don’t do — that is different from their competitors.

Research has shown that financial literacy starts to decline after age 49, but a person’s confidence in making financial decisions only continues to increase. According to a panel of retirement income experts speaking at the NAPA 401(k) Summit, that only makes the need for lifetime income solutions that participants can decide on earlier in their accumulation phase all the more important. But despite many efforts, including a heavy dose of participant education, it’s an elusive goal to bake into a participants plan, and the path forward is not clear. “The challenges we face [don't] make it practical at the start. Right now the infrastructure challenges to share data across organizations, the fiduciary responsibility, there are a host of things that make it very challenging. Today it’s not practical to implement it broadly,” said Kelli Hueler, founder of Hueler Companies.

Brian Graff, CEO of the American Retirement Association, the parent organization of the National Association of Plan Advisors, found himself sitting next to billionaire investor Carl Icahn at the Candlelight Dinner the night before President Trump’s inauguration. When Graff explained what he did to Icahn, advocating for 401(k) participants, Icahn, he said, was fascinated. “He had no idea that 401(k)s were that big of a deal,” Graff said, even though they are the main retirement funding vehicle of the majority of Americans. Ignorance of the plight of the 401(k) holder, (i.e. all of middle-class Americans) isn’t limited to billionaires. Graff said he met many representatives in Congress who are ignorant of the way 401(k)s work.

It’s no secret that most advisory conferences are attended by Baby Boomers, and a staple of such conferences is the “private” concert by a rock star whose glory days of public adulation are, perhaps, behind them. Custodial conferences have showcased the likes of Pat Benatar, Train, Steve Miller Band, etc. But the NAPA 401(k) Summit has taken the crown with an opening night private concert from the Royal Machines. Lineup: Former Jane’s Addiction guitarist Dave Navarro and bassist Chris Chaney, Guns N’ Roses guitarist Gilby Clarke, Cult guitarist Billy Morrison and Sugar Ray singer Mark McGrath. 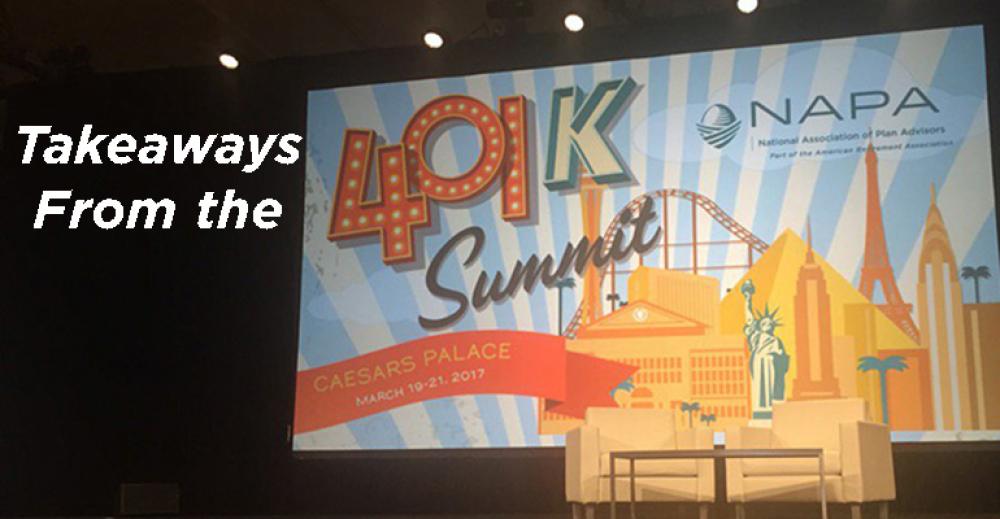