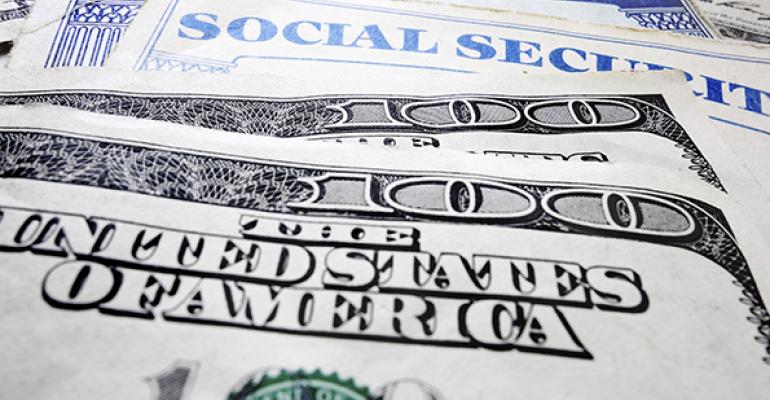 Big Social Security COLA Will Be Offset By Medicare Premiums

Inflation trends point toward a COLA increase of about 2 percent, far outpacing 2016 and 2017.

CHICAGO, June 22 (Reuters) - Retirees can look forward to the largest Social Security cost-of-living adjustment next year since 2012 - but don’t break out the champagne just yet. For many, higher Medicare premiums will take a big bite out of their raise.

The 2018 Social Security cost-of-living adjustment (COLA) will not be announced until October, but inflation trends point toward an increase of about 2 percent, according to a recent forecast by the Senior Citizens League. That would be a welcome change compared with the 0.3 percent bump in 2017, and 2016 when no COLA was made.

COLAS are determined by an automatic formula tied to the Consumer Price Index for Urban Wage Earners and Clerical Workers (CPI-W). From 2013 to 2015, the annual increases have ranged around 1.5 percent.

For a retiree receiving the average monthly Social Security benefit of $1,360, a 2 percent raise would translate to an increase of $27.20. But for most beneficiaries, Medicare Part B premiums are deducted from Social Security. And the impact of the Part B premium on net benefits next year will vary due to what is known as the “hold harmless” provision governing Social Security.

By law, the dollar amount of Part B premium increases cannot exceed the dollar amount of the COLA - a feature that ensures net Social Security benefits do not fall. The hold harmless provision applies to the 70 percent of the Medicare population enrolled in both programs. Those not held harmless include anyone delaying their filing for Social Security benefits, but others affected include some federal and state government retirees. Affluent seniors who pay high-income Medicare premium surcharges also are not protected.

The stingy COLAs of the past two years are rare, and now they have set the table for an equally unusual situation for 2018.

The recent flat COLAs meant that nonprotected Medicare enrollees shouldered most of the burden of rising Part B premiums; the premiums for this group jumped sharply in 2016 and 2017. This year, they are paying $134 per month, while protected beneficiaries are paying an average of $109.

But a generous 2018 COLA will spread higher Part B program costs across the entire Medicare population. That means nonprotected enrollees will see their premiums fall, while the protected group will pay more.

Consider an example where the standard Part B premium falls to $125. That above-mentioned average Social Security beneficiary, (receiving $1,360 monthly) now faces a $16 increase in her monthly Part B premium, reducing her COLA from $27.20 to $11.20. If she were receiving $2,000 a month she would receive a net monthly COLA of $24, instead of $40.

How would low-income beneficiaries be affected? Someone receiving $600 would see her $12 gross COLA cut to just $6 - although she might also be eligible for a Medicare Savings Program depending on where she lives. In some states, these programs turn to Medicaid to pay Part B premiums, which means she would receive her full COLA (http://reut.rs/1OXKZ9b).

Setting aside the hold-harmless math, the COLA formula is not keeping seniors even with rising inflation. The Senior Citizens League’s annual study of changes in key costs impacting seniors found that Social Security beneficiaries have lost nearly one-third of their buying power since 2000, and they have lost 7 percent just over the past 12 months.

Healthcare premiums and out-of-pocket costs loom large, accounting for five of the top 10 items in the study. “Retirees are either spending down their savings to cover the gaps, or simply going without,” said Mary Johnson, the group’s Social Security and Medicare policy consultant.

The healthcare cost trend underscores the value of working longer. Staying on the job reduces the number of years of Medicare premium payments, and creates opportunities to boost Social Security income - and COLAs - through delayed claiming. A growing number of planning experts also suggest that retirees keep part of their portfolio in stocks well past retirement age to help beat inflation.

For workers in high-deductible health plans, health savings accounts (HSAs) offer the opportunity to save tax-free; the dollars can be invested and later spent tax-free to meet health expenses. But for most people, HSA contributions wind up being used to meet current health expenses.

But in general, healthcare cost inflation simply underscores the need to boost saving, notes Ron Mastrogiovanni, Healthview’s CEO. “Big numbers scare people, but you can do something about this.” (Editing by Matthew Lewis)