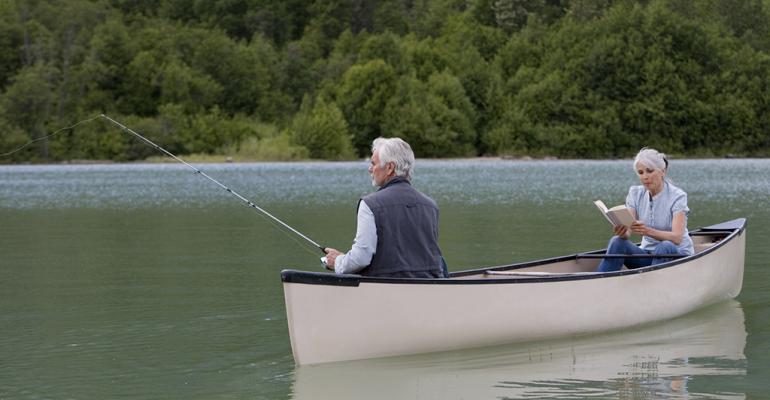 The Big Problem With 401(k)s We Refuse to Solve

When you use one of those online calculators to estimate your expected income in retirement, it can sure seem so. Investment returns have proven variable, and individuals are often prone to making idiotic mistakes (like selling everything when the market crashes, which is literally the worst possible time to do so). And that’s only for people who have a 401(k); many people decline to participate in a plan, even when their employer offers matching grants. And according to the Wall Street Journal, the early boosters are turning sour on the whole idea.

“The great lie is that the 401(k) was capable of replacing the old system of pensions,” former American Society of Pension Actuaries head Gerald Facciani told the Journal. “It was oversold.”

This is true. On the other hand, so was Social Security oversold. As was that good ol' defined benefit pension, so beloved of editorial writers, which was available to only a minority of workers when the 401(k) sprang into being. Nor were those pensions necessarily the generous perpetual incomes of popular imagining; autoworkers and public-sector employees got a great deal, but most people were not working for either the government or General Motors. They got smaller pensions -- sometimes much smaller, if their companies failed and dumped the pensions onto the government’s pension insurer.

There’s a perpetual pundit debate over the best way to provide for retirement: defined benefit plans (pensions), defined contribution plans (401(k)s, IRAs and the like) or pay-as-you-go social insurance schemes (Social Security). Most retirement experts I’ve talked to prefer a mix of these, a “three-legged stool.” But as I’ve written before, this is a bit like arguing whether the Titanic would have survived the iceberg if only its hull had been painted green. All three types of retirement savings have different costs and benefits. But these costs and benefits are not the primary reason that people in Western countries have to worry about an impoverished old age.

The funny thing is that, for all the people arguing that some dire problem in one of these three retirement systems urgently requires that we switch to another kind at once, the major problem with all three is exactly the same. It’s even a problem that’s easy to state and easy to fix -- no need for extensive blue-ribbon commissions or elaborate white papers. Here’s the solution: Pick whichever system you prefer; it really doesn’t matter. Now slap a 10 to 15 percent surcharge on a worker's wage income, and divert that money into the system for the worker’s future use. Problem basically solved, because in all three cases, the only flaw that actually matters is that they’re badly underfunded.

If you expect to spend 40 years of your life working, and then another 20 or 30 years living off the money you made during that time, then you need to save a large portion of your salary. Imagine yourself storing up food for the last 30 years of your life from the harvests made during the first 40. You might hope that when you're older, and no longer toiling in the fields, you won’t need to eat so much. Nonetheless, you’d understand that you would need to put aside a considerable portion of your harvest -- something close to what you're eating each day -- to ensure that you don’t starve to death in your old age.

Somehow, we imagine that modern society can make the math different for all the other stuff we consume, from cars to televisions to little paper umbrellas to stick in the cocktails at our retirement parties. And to be fair, to some extent, it has. If productivity is growing quickly, then it is easier to maintain our pre-retirement lifestyles with a smaller pool of savings, because that savings will buy more.

Alternatively, we can have a lot of kids. No matter how you manage your retirement system, you are ultimately expecting to depend on the labor of people younger than you. Whether that labor comes to you in the form of a dividend check or a government benefit or a saintly daughter-in-law building you a new annex in the backyard, you are still expecting someone else younger than you to make stuff, then give it to you without expecting more than gratitude in return. The more workers there are relative to retirees, the smaller the fraction of their income each worker has to give up to support each retiree, and the easier it will be to get them to do so.

Unfortunately, productivity isn’t growing rapidly, and we didn’t have a lot of kids. That leaves plowing a great deal of money into savings and investment, in the hopes that productivity will start to grow again. There is no substitute, no neat transformation we can enact to make that fundamental problem go away.

All the pundits and experts and not a few politicians have been telling us the exact same thing for decades: The retirement system doesn’t have enough money in it. Yet somehow, we are no closer to the obvious solution of putting more money in it. Arguably, in fact, we’re further away, because these endless arguments about the form that our savings should take provide us an excuse to put off doing the saving.

So why do we spend so much time complaining about some side problem with one of the systems, instead of the major problem with all three? Because none of the experts know how to get people to actually do this: to save 15 to 20 percent of their income, or sit still for a law that would make them. Nor has any clever technocrat come up with a way to sort of slip this by folks without their really noticing.

The 401(k) was not the miracle cure for our retirement problems that was promised by some of its more zealous advocates. But it wasn’t a mistake, either, or at least not the important one. The important mistake was deciding that we could spend our first 25 years in school, and our last 25 years in retirement, without cutting our consumption in between. And, at least to date, that’s one mistake we don’t seem to be able to learn from.

Megan McArdle is a Bloomberg View columnist. She wrote for the Daily Beast, Newsweek, the Atlantic and the Economist and founded the blog Asymmetrical Information. She is the author of "“The Up Side of Down: Why Failing Well Is the Key to Success.”