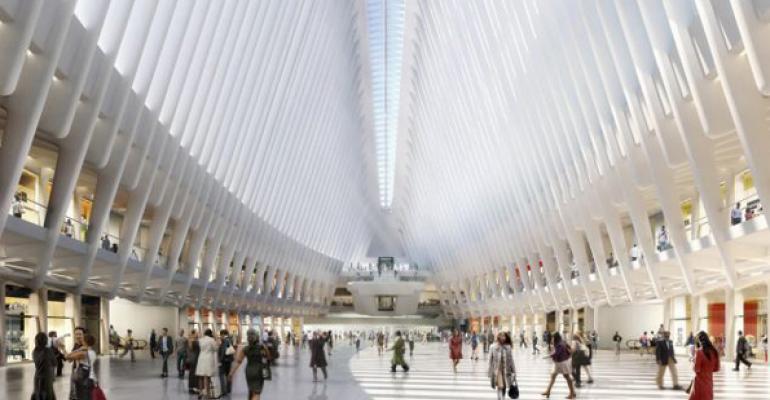 (Bloomberg)—There are always crowds at the shopping mall inside the Oculus transit hub in lower Manhattan: commuters rushing to their trains, tourists wandering about after a stop at the nearby 9/11 Memorial & Museum or a photo shoot at the Statue of Liberty.

The mammoth, butterfly-shaped Oculus draws as many as 120 million visits each year -- often people passing through on their way to somewhere else. Visitors spend just a little over a half hour on average at the mall, Westfield World Trade Center. Now, its operator has plans to get them to linger longer.

“I’m not sure we need more traffic,” Jean-Marie Tritant, U.S. president for Unibail-Rodamco-Westfield, said in an interview. “We were lacking this kind of offer where people can stay, hang around, have a good time together.”

Eager to remain relevant in the rapidly changing world of retail, URW is adding more food choices, seating, pop-up shops, health and wellness options and entertainment (think virtual reality). The French mall owner, which has 32 shopping centers in the U.S. and is Europe’s biggest commercial landlord, is also using loyalty perks and technology to learn more about customer preferences.

One category the company doesn’t want to expand? Fashion.

Today, fashion makes up a little less than half of Westfield World Trade Center’s leasable area. URW’s goal is to whittle that down to closer to a third, while boosting other offerings, like eateries. Last month, it opened Market Lane, a food hall that includes a bakery, pizza counter and small grocery store. Upgraded dining options could make the Oculus a more-popular hangout for the neighborhood’s thousands of transit riders and workers, which collectively make up about 40% of the mall’s traffic.

Another way to get people to stick around? Give them a place to exercise. Boxing studio Gloveworx opened in the Oculus at the beginning of the year, and Tritant said URW could bring in other niche fitness options, like CrossFit.

The landlord regularly freshens the mix at its properties. Among the top-performing businesses at Westfield World Trade Center, Tritant said, are mattress maker Casper and luxury purse reseller Rebag, newer companies that established themselves on the internet before opening bricks-and-mortar locations. Later this year, URW plans to start spotlighting other emerging and high-end brands by featuring three- to six-month pop-ups in the center of the Oculus.

The road ahead won’t be an easy one. Malls across the country have battled to survive amid the shift to online shopping, and operating an indoor center in New York City, where street shopping is so popular, comes with its own set of challenges. Plus, the Oculus has a shiny, new competitor -- the $2 billion Shops at Hudson Yards that just opened on the far west side -- and is across from Brookfield Place, an office complex with its own retail and dining concourse.

URW will need to reinvent the mall with “different stores, new graphics and more energy,” said Mitchell Moss, a professor of urban policy and planning at New York University. Opened in 2016 as a replacement for the original transit hub destroyed in the Sept. 11, 2001, terrorist attacks, Santiago Calatrava’s Oculus -- with its soaring ceilings and winding walkways -- wasn’t primarily designed as a shopping palace, and that’s part of the problem.

“A good mall has multiple opportunities for serendipity as the basis for shopping, and this mall undermines that principal, because you’re bumping into open space, not into another store,” Moss said. “It’s beautiful interior space, but it’s not really conducive to shopping.”

Many mall operators track location data on shoppers’ smartphones to determine what stores they’re going to and how long they’re staying. URW also seeks to engage more directly with visitors to learn about their preferences, Tritant said.

One way the company does this is through its loyalty program, which notifies frequent patrons about special offers, discounts and new merchants. Visitors to the landlord’s U.S. malls stop at 2.6 stores on average. Offering more perks, like deals on your birthday, could boost that rate and give URW more insight into how customers shop.

“We want to be able to be much more relevant in what we do for them,” Tritant said. “Everybody has a birthday.”

To contact the reporter on this story: Lily Katz in New York at [email protected].

To contact the editors responsible for this story: Debarati Roy at [email protected]