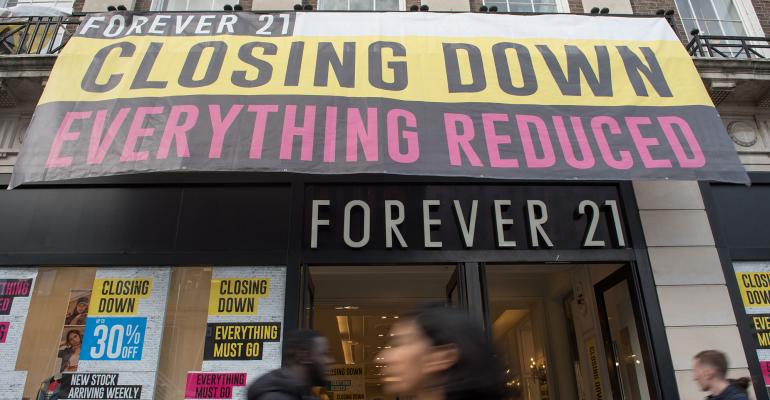 Is Simon and Brookfield’s Forever 21 Buy a Smart Play or a Hail Mary Pass?

Regional mall REITs have some experience in saving ailing retailers. But Forever 21 comes with added pressures.

After months of speculation, mall owners Simon Property Group and Brookfield Property Partners bit the bullet and made a bid for bankrupt fast-fashion retailer Forever 21. Simon and Brookfield, in partnership with Authentic Brands, are reportedly looking at a bargain deal at $81 million for essentially all of the company’s assets, but the decision to buy the chain might be an indication of how much pressure mall landlords are facing to keep their centers occupied.

Last year U.S. store closings reached an all-time record with approximately 9,300 shuttered locations. Bad news continued coming in January, with several retailers, including Papyrus and Pier 1, either announcing bankruptcy, preparing for a filing and/or closings hundreds of stores. J.C. Penney has just received a letter of non-compliance from the New York Stock Exchange, according to MarketWatch, because it could not maintain a closing stock price of at least $1 per share for 30 consecutive days.

As a result, at the end of the fourth quarter of 2019, vacancy at regional malls reached a 10-year high at 9.7 percent, according to research firm Moody’s Analytics REIS, and rents have grown at an anemic 0.4 percent over the course of the year. Even then, the numbers may not represent the full picture, according to Moody’s Analytics REIS researchers, because many department store spaces are owned by the tenants themselves and their metrics are not included in the REITs’ reporting.

The regional mall sector also remains a primary area of concern for CMBS lenders, with one of the highest 30+ day delinquency rates among all property types and some of the largest new loan delinquencies added in recent months.

All of these factors might be behind Simon and Brookfield’s rationale for stepping in.

The deal to buy Forever 21 isn’t the first time regional mall REITs have tried to save an ailing retailer. Back in 2016, Simon partnered with GGP (now owned by Brookfield) to buy out teen apparel seller Aeropostale. The strategy seemed to have worked—Aeropostale is still around today. In 2017, the retailer managed to re-open 500 stores. In recent years, Simon had also invested in Nautica, Life Time and Allied Esports, among other retail and restaurant operators.

Speaking at a company presentation in mid-2019, Simon CEO David Simon also indicated that the REIT remained open to investing its own money to help struggling retailers stay afloat, as long as the retailers’ size and brand value merited an investment.

“We’ll work together on other distressed situations.” But, “we’re only going to buy into companies that we think have brands and that have the volume that is worth doing it.”

Here Business Insider goes into what led Forever 21 to stumble.

Still, market observers don’t seem to be so sure Simon is doing the right thing this time around—last week, Seeking Alpha described the company’s rumored intentions to buy Forever 21 as “desperation.” According to the blog:

“As Simon’s 7th largest tenant, Forever 21’s 96 stores are responsible for close to $50B of $3.5B or 1.4% of Simon’s minimum base rent. Although less than a hundred stores, Forever 21 stores are huge, making the brand one of Simon’s largest inline tenants. The average Forever 21 store is 38,000 sq. feet. (Although Simon’s seem to be a little smaller). Needless to say, in today’s retail environment, if all these stores were to unexpectedly go dark there would be a lot of valuable space to repurpose.”

But what also may exacerbate Simon’s and Brookfield’s troubles if Forever 21 goes under or closes more stores are co-tenancy clauses, Seeking Alpha points out.

According to Neil Stern, senior partner with Chicago-based retail consulting firm McMillan Doolittle, Simon, Brookfield and Authentic will likely face some challenges in turning around Forever 21 that may not have been at play in the Aeropostale case. Here are his answers to NREI’s questions about the outlook for Forever 21 and the buyout.

NREI: At this point, what do you think is/are Forever 21’s biggest issues? What would Simon, Brookfield and Authentic Brands need to fix in order to ensure the chain has a long-term future?

Neil Stern: The biggest issue is cleaning up the existing mess. [Forever 21 has] too many stores, stores that are too large, etc. Obviously, they will have the opportunity to clean up some issues around occupancy costs, but that was not likely the biggest culprit here. The sector of fast fashion is still viable, but certainly has it challenges, with consumers becoming more conscious around sustainability. Forever 21 needs to regain its focus again.

NREI: Simon already has experience buying out a struggling retail chain in Aeropostale in partnership with GGP and turning it around. When it comes to Forever 21, do you view this as a viable strategy on Simon’s and Brookfield’s part to save an ailing anchor or more of a “let’s buy ourselves some time” maneuver?

Neil Stern: They did have success with Aeropostale, but this is on a much larger scale. Saving a 2,000-3,000-sq.-ft. small box user is very different than these giant stores. There will obviously be more risk, but these boxes are more important for the centers themselves.

NREI: If Forever 21 can be saved, what type of a store fleet would it need in terms of total store count and store size?

Neil Stern: Forever 21 needs to right-size the fleet and right-size the store sizes. It will be much easier to operate the chain effectively. This could mean exiting the bigger boxes.