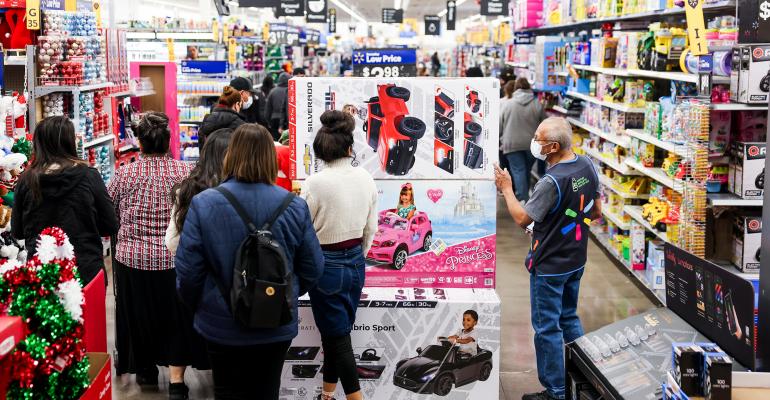 One reason this year’s gain wasn’t larger is that retailers spread out traffic peaks by starting holiday deals early.

(Bloomberg) -- Black Friday, traditionally the busiest and most important day of the year for retailers, is in the books. While final results likely won’t materialize until early 2022, there are some initial clues as to who is having the best holiday.

Among the early trends coming into focus are fewer promotions and thinner crowds compared with pre-pandemic Black Fridays. Demand has been brisk, however, and shopping appears to be more spread out than in the past.

We’ll take a look at the latest information here as it becomes available throughout the weekend. All time stamps reflect the U.S. East Coast.

Shoppers returned to stores on Black Friday this year but traffic remained well below pre-pandemic levels, according to Sensormatic Solutions.

Visits to stores and shopping centers climbed 48% from a year ago while trailing 2019 traffic by 28%, Sensormatic said in a report Saturday. One reason this year’s gain wasn’t larger is that retailers spread out traffic peaks by starting holiday deals early, said Brian Field, senior director of global retail consulting at Sensormatic.

“Everybody started earlier and, most importantly, the shopper started earlier,” he said. “Going back to pre-pandemic times, the holiday season very clearly started the week of Black Friday. You could bank on it.”

During the holiday season as a whole this year, in-store visits are expected to lag 2019 levels by only 10% to 15%, said Sensormatic, a unit of Johnson Controls International Plc. Despite Covid-19 concerns, research points to consumers prioritizing in-store shopping to avoid potential shipping delays amid well publicized logjams in the global supply chain, Field said.

A Best Buy store near Minneapolis was robbed by a group of 20 to 30 people Friday, according to a newspaper report, just a few days after the electronics retailer said rising organized theft was taking a toll on its finances.

The alleged assailants “grabbed numerous electronic items” and fled the store in Burnsville, Minnesota, before police arrived, the Minneapolis Star Tribune reported Saturday. No weapons were seen and no injuries were reported, the newspaper said, citing a police captain. No arrests had been made as of early Saturday.

Best Buy Co. is seeing more “organized retail crime,” and burglaries by groups of thieves are denting profits, CEO Corie Barry said Nov. 23 after the company reported earnings. Crime wasn’t the only financial pressure on Best Buy, which said that results also took a hit from deeper discounting and costs tied to a new membership program.

The Star Tribune said there were also unconfirmed media reports that a smaller group robbed a separate store in Maplewood, Minnesota, on Friday.

Black Friday spending is expected to reach between $8.8 billion and $9.2 billion, according to the latest tally from the Adobe Digital Economy Index. Consumers have spent $6.6 billion as of 9 p.m. in New York, it said.

Daily sales exceeded $3 billion for 18 days this month, a record, compared with just five days at this point last year, Adobe said. Spending also surpassed $2 billion on the other days, it added.

“Black Friday still remains a major online shopping day, but the surge in online shopping is coming from the less marketed days of the season,” said Taylor Schreiner, director at Adobe Digital Insights, noting that shoppers started with their purchases since late October.

Toys and cooking items were the top sellers for the day, Adobe said. With shoppers still concerned about the pandemic, curbside pickup has risen 78% from two years ago, it added.

Shoppers May Be Frontloading Purchases, One CEO Says

Robust Black Friday sales at some retailers don’t necessarily mean the momentum will continue apace through December. Shoppers, wary of supply-chain snafus and out-of-stock messages from businesses, might just be front-loading their holiday shopping to make sure they don’t come up empty handed, said Julia Hunter, the CEO of Jenni Kayne, the high-end apparel and home-goods brand.

“We have to wait and see how long people will be shopping,” she said. Still, she’s optimistic since Jenni Kayne’s first day of holiday discounting on Wednesday saw e-commerce sales rise sharply while in-store revenue increased compared to Black Friday last year.

Hunter said she had been cautious heading into the start of the holiday shopping season because sales momentum at the beginning of November was a bit sluggish. But robust sales this week are a sign that perhaps shoppers were holding out for Black Friday promotions.

“I think people have been really excited about Black Friday this year,” she said. Jenni Kayne is offering deeper discounts this year than last year -- bucking the overall retail sector trend.

Consumers are increasingly financing their holiday shopping with pay-later options and installment plans for their purchases.

On Thanksgiving, purchases in the U.S. using Klarna, one such app offering installment payments, rose 124% from a year ago. And as of 9 a.m. on Black Friday, sales on the app had gained 132%, Klarna said.

According to data from Salesforce.com Inc., shoppers used buy-now-pay-later options on 8% of all purchases in the past couple of days -- up 31% from the previous year.

“Generally, because of rising costs, people are willing to pay more for a particular item,” said Garf, vice president of retail at Salesforce. “They want to buy early, but on the other hand, they are trying to be prudent with their budget.”

After taking a year off, Santa has returned to Macy’s in New York’s Herald Square, the nation’s biggest department store. But don’t expect to sit on his lap.

Santaland, which opened Friday after being a virtual experience last year, is now reservation-only as a way to maintain a Covid-safe experience, said Kathy Hilt, division vice president at Macy’s, who oversees the Herald Square location as well as other stores in the area. Reservations tend to sell out, she said, so families should book early.

“We also have reorganized the experience with Santa to make sure Santa and the guests are socially distant but still have the chance to interact with one another,” said Hilt, a 31-year veteran with the company.

The thinking last year was that the lack of doorbuster deals would be a one-time thing. So much for that.

With Covid-19 still lingering -- and a new variant emerging -- retailers have largely eschewed offers that would require customers to pack into stores to get them. But that doesn’t mean Black Friday sales have completely disappeared, noted Poonam Goyal, Bloomberg Intelligence retail analyst.

“What we don’t have again is doorbusters,” she said. “All the deals that are available in store are largely available online, which seems that you can go out if you want to enjoy the experience of Black Friday shopping but alternatively you can find everything still online from your home without stepping outside. I think online shopping will be a much bigger deal.”

Macy’s Inc. CEO Jeff Gennette said he doesn’t see Black Friday foot traffic bouncing back to pre-pandemic levels this year, adding that traffic at stores remains below what it was in 2019. More of those who go in are actually making a purchase, however.

Like the rest of the industry, staffing has been a challenge.

“We’ve got some stores in great shape and some stores that are really lean,” Gennette said in an interview last week. The department-store chain said earlier this month it would raise the minimum wage to $15 an hour by May. Because of seasonal challenges, that pay boost has already gone into effect in more than 100 stores for the Christmas hiring season.

Hiring has improved,“but we still have some gaps and open jobs,” he said. “We’re mitigating that by offering spot bonuses or premium pay for weekends. We’re offering our colleagues opportunity for overtime and working six days.”

Small businesses are feeling “pretty optimistic” about the holiday season, said John Waldmann, chief executive officer of Homebase, a software company that helps small businesses manage their teams. But challenges still loom, particularly in regards to staffing, he said in a recent interview.

About 35% of small business owners said they are looking to hire at least one seasonal team member. This means that some companies will be understaffed, some will be short on experience, and some will suffer from both problems, Waldmann said. He said that more than 60% of small businesses reported they’ll be paying workers more this year, compared with 2020.

Staffing shortages could mean a less-pleasant experience for shoppers. “Consumers, be patient and be kind,” he said.

Homebase recently surveyed 400 small business owners and 2,000 employees about their outlook for the holidays.