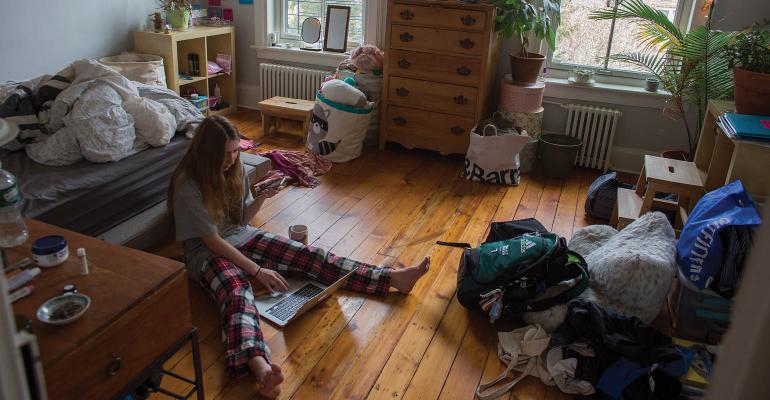 From Schools to Bars, Closures Spread in America’s Big Shutdown

The steady barrage on Sunday included decisions by the governors of Ohio and Illinois to close bars and prohibit dining in restaurants.

(Bloomberg) -- The biggest school system in the U.S. is closing. California is confining the elderly to their homes. And bars, restaurants, resorts and several retail chains are closing shop. Welcome to the Great Shutdown, as wide swaths of the American economy enter suspended animation to combat the spread of coronavirus.

On Sunday, New York City Mayor Bill de Blasio said the city’s public schools -- encompassing some 1.1 million students -- will close until at least April 20. California Governor Gavin Newsom called for all of the state’s bars and wineries to close and for restaurants to cut capacity by half, while advising the state’s 5.3 million citizens above 65 to isolate themselves in their homes.

“This crisis is growing intensely,” De Blasio said when announcing the schools decision. “This is something I could not in a million years imagine having to do.”

The steady barrage on Sunday included decisions by the governors of Ohio and Illinois to close bars and prohibit dining in restaurants. The unprecedented moves are intended to help contain the highly contagious virus that’s infected more than 160,000 people worldwide and led to 6,000 deaths, including more than 60 in the U.S. They followed the sweeping restrictions on crowded venues and gatherings imposed earlier by Italy, Spain and France -- dramatic measures for nations known for their out-and-about lifestyles.

While only a small share of those infected end up needing hospital care for the respiratory illness caused by the virus, the speed and magnitude of its spread can overwhelm hospitals, as happened in China and Italy.

De Blasio said the city plans to begin online instruction starting March 23, with teachers receiving training this week on software to help them convert their classwork for the Internet. While the goal is to try to reopen April 20, he acknowledged that classes might be done for the year.

Apple Inc. has sold iPads to the city at a discount, schools Chancellor Richard Carranza said, so that 300,000 students who need devices could receive loaners connected to the Internet through programs offered by T-Mobile, Verizon, Spectrum and Google.

De Blasio didn’t order the shutdown of bars and restaurants ahead of St. Patrick’s Day, a holiday notorious in the city for drunken revelry, but said officials would strictly enforce rules limiting them to 50% capacity. He said stronger measures were under consideration and that the city now has 329 cases of coronavirus and five deaths.

In Ohio, Governor Mike DeWine ordered all bars and restaurants to close starting at 9 p.m. Sunday, adding that venues can stay open for carry-out and delivery. “What we can’t have is people congregating and seated,” he wrote on Twitter.

One small bar was a couple of days ahead of DeWine, telling its patrons on March 13 that it was closing while the virus spreads.

“We made the decision to shut it down for public safety, knowing that our governor hadn’t imposed any restrictions yet, but we felt it was the right thing to do,” said Mark Altemeier, who along with wife Amy owns the Monkey Bar & Grille in the Cincinnati suburb of Mainesville, Ohio. The pub, set along the Little Miami River and named for an infamous cigarette-smoking chimp called Sam who entertained bar-dwellers there decades ago, can pack in 400 to 500 people on weekends. Amy Altemeier said Sunday she had expected as many as 2,000 revelers to filter through for this week’s St. Patrick’s Day festivities.

In Illinois, Governor J.B. Pritzker imposed an order similar to Ohio’s, to run from March 16 to March 30. In the nation’s capital, leaders put an end to bar seating, ordered tables to be pushed 6 feet apart, and shut down nightclubs.

Los Angeles Mayor Eric Garcetti said on CNN that the city’s bars are closing as of Sunday night and dine-in restaurant service soon after that.

“I would like to see a dramatic diminution of the personal interaction that we see in restaurants and bars,” Anthony Fauci, director of the National Institute of Allergy and Infectious Diseases, told CNN on Sunday. “Whatever it takes to do that, that’s what I’d like to see.”

Few types of venue are being spared -- including outdoor spaces. Miami and Fort Lauderdale, which at this time of year are filled with college students on spring break, have closed some beaches to the public, suspended concerts and ordered bars and restaurants to operate at 50% capacity, according to local news reports.

Starbucks Corp. said Sunday it would pause all in-store seating in the U.S. and Canada, and shutter stores in high-traffic area like university campuses and malls. It will still offer customers to pick up coffee to-go.

In Colorado, Governor Jared Polis ordered the shutdown of all ski areas for a week, shortly after Vail Resorts Inc. suspended operations of its North American mountain resorts and retail stores through March 22. In Arizona, Grand Canyon National Park remains open but South Rim restaurants were far emptier than usual, and ranger programs and showings of the park film were canceled.

Also on Sunday, New York Governor Andrew Cuomo urged businesses to voluntarily shutter or have people work from home, and said the school closings are necessary to mitigate the spread of Covid-19, the respiratory illness caused by the coronavirus.

What we do next will have a massive impact on the trajectory of this virus in New York.

We can only maintain public health by STAYING APART.

The decision each of makes now will impact us all tomorrow. STAY HOME.

Many businesses are heeding such calls. Urban Outfitters Inc. said Saturday it would close all stores until at least March 28. On Sunday, Abercrombie & Fitch followed, but said its stores in the Asia-Pacific region will remain open. On Monday, Nike Inc. will close all its shops in the U.S., Canada, Western Europe, Australia and New Zealand through March 27.

While large national or global businesses may have the resources to temporarily close stores, some small businesses are trying novel approaches to stay afloat.

Modo Yoga, with 70 studios North America, Europe and Australia, has begun streaming free classes over Instagram, encouraging users to support them by chipping in a few dollars via Venmo or PayPal.

“We’re hanging on for dear life,” said Steve Vernetti, owner of Vernetti, a self-financed mom-and-pop Italian restaurant on Larchmont Boulevard in Los Angeles that counts Mayor Eric Garcetti among its regulars. “Next week I’m going to write a letter to my landlord begging him to reduce the rent. We have exorbitant costs. Business is down 75%.”

And creative workarounds aren’t just happening in the secular world: In Sugar Land, Texas, The Bridge church closed its doors, asking worshipers to participate in services online through March 29. Sugar Land is in Fort Bend County, which has nine confirmed or presumed cases of coronavirus.

Some businesses that chose to stay open are actually riding a bit of a wave. Richard Falco, a host and server at pizzeria Johnny Pepperoni in Hoboken, New Jersey, said the restaurant had more pick-up and delivery orders than typical on March 14. And the Emerald Fields cannabis dispensary in Glendale, Colorado, is holding tight, armed with sanitizer to handle increased traffic. Customers are a little panicky, said one employee.

For now, the shutdowns in the U.S. are less severe than in parts of Europe. Italy began a nationwide lockdown Monday. This weekend, Spanish authorities banned citizens from leaving their homes except for work or to buy essential supplies or medicines. And the French government shut down all restaurants, cafes, cinemas and nonessential retail shops.

Yet even Americans who shy away from cable news, Twitter or newspapers likely won’t be able to escape the myriad encouragements to avoid their fellow humans.

“Hands clean 2 beat Covid-19,” read an electronic message board next to State Highway 288 in Houston. A short while later, there was another: “Give xtra space with each other and on the road.”

(Updates with closure details throughout)

To contact the reporter on this story:
Anders Melin in New York at [email protected]