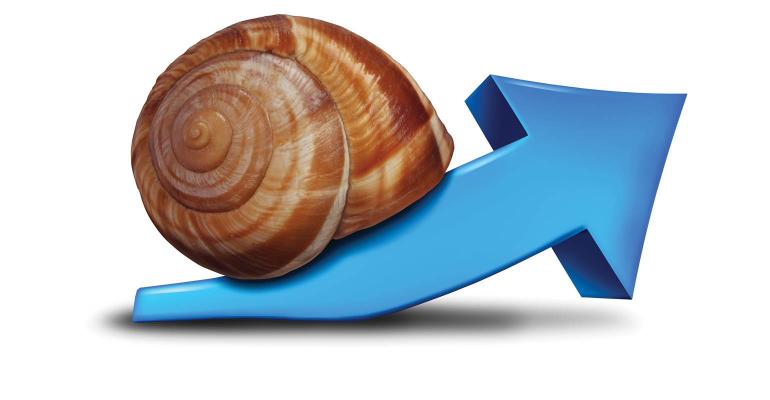 Retail Rents Are Rising Across the Board, But at a Glacial Pace

While both asking and effective retail rents are trending up, the anemic growth reflects worries about continuing store closures.

Despite continuing U.S. store closures, retail rental rates are trending slightly higher, and some argue that the overall retail sector is in relatively good shape.

“When you take all retail product types, the overall asking rents are going up,” says James Cook, Americas director of retail research with real estate services firm JLL. “That belies or goes against the popular narrative of the day.”

“The truth of the matter is we have so many retail sub-types that are just doing fine. There are all these services and grocery-anchored centers, and even power centers have had a comeback of late. And the majority of malls are still doing okay, for the most part. You see these poster children for bad retail news that kind of misdirect people away from the big picture.”

What does the data say?

Research firm Reis Inc. reported that both the national average asking rent (at $21.39 per sq. ft.) and effective rent (at $18.73 per sq. ft.), which excludes landlord concessions, increased 1.7 percent in the second quarter 2019 compared with one year earlier. Reis reported that rents at regional malls were up 0.2 percent.

The sector is seeing a “continued picture of slow, creeping rent growth in terms of both asking and effective rents that are pretty much growing in step around the mid-1 percent range year-over-year,” says Matthew Schreck, senior quantitative strategist at Ten-X Commercial, an online real estate marketplace. That’s slow compared to the last expansion in the early 2000s, when rents were growing in the mid-2 percent to as high as the upper-3 percent range, Schreck notes. But they’re still moving in the right direction.

“Rents are growing across property types and across markets, and I think it has more to do with the fact that we’re in a longstanding, fairly robust economic expansion,” he says. “The unemployment rate is really low. Incomes are growing. People are spending their money and, in a sense, a rising tide lifts all boats.”

But the degree to which they’re lifted varies, Schreck adds. Some sectors and some markets have seen much stronger real estate recoveries in this cycle than others, and retail has been among the slowest to come back. He notes that the rate at which the rents are growing is a bit disappointing. “And it sort of begs the question of what would these [weaker] markets look like in the event of any kind of an economic downturn.”

JLL reported that overall retail property fundamentals remain solid despite store closings. The average overall retail rent in the first quarter of 2019 was $17.96, up 1.4 percent quarter-over-quarter and 5.4 percent year-over-year. Peaking markets included Portland, Ore., Houston, Atlanta and Orlando, Fla. Malls posted an average rent of $17.22 per sq. ft., according to JLL, an increase of 0.1 percent quarter-over-quarter, but an 8.2 percent drop year-over-year.

Two retail tenant categories that are hurting the most, according to Cook, include department stores and mid-range apparel stores and both are mall-based retailers. Chains announcing major store closures have included J.C. Penney, Payless Shoe Source, Charlotte Russe and Gymboree.

For the time being, however, mall performance has steadied. “A year ago, you were seeing some negative numbers, but if you compare from the previous to the current quarter, it seems to have stabilized,” Cook says.

Owners of prime, class-A malls view the closings of flailing department stores as an opportunity to reposition and rebrand the space and increase revenue. Backfilling spaces with tenants like Dick’s Sporting Goods, Ross or Whole Foods brings in higher rents, generates greater sales and drives more foot traffic to the property.

“The malls where the anchors and tenants are the same people you saw 20 years ago, those are the ones that are going to continue to struggle,” Cook says.

Meanwhile, class-A malls in prime locations that have continually updated themselves with the most current stores and best food and entertainment options will prove more successful, he notes.

“They’re going to go out and get the cool, new digitally native retailer,” Cook says. “Maybe they put in a food hall or partner with a chef to do something. Those guys are still the ‘haves’ in this game. They’re still the places everybody goes to on weekends.”

Even at power centers, rental rates are trending upward, Cook says. Power centers have taken a hit with significant big-box store closures, including Toys “R” Us, Babies “R” Us and Sports Authority.  Power centers’ average rental rate was $17.83 per sq. ft. in the first quarter, according to JLL—up 0.2 percent quarter-over-quarter and 1.8 percent year-over-year.

“There’s demand coming from two main sectors—one is around value retail, which is still expanding,” Cook notes. That includes TJX’s concepts, Ross and Old Navy. The other is demand from fitness concepts—both value gyms like Planet Fitness, Anytime Fitness and Blink Fitness, and smaller boutique fitness brands like Orangetheory, Pure Barre and CrossFit.

The average rent for community, neighborhood and strip centers was at $16.06 per sq. ft. in the first quarter—up 1.2 percent quarter-over-quarter and 3.6 percent year-over-year.

“While there have been some new locations by H-E-B and Kroger, most demand is in the smaller footprint,” Cook says. “They’re smaller square footage, limited selection, very limited service, but high value.”

“That’s a combination of landlords investing in tenant improvements to be able to get the higher rates, and also there has been a good number of second-generation restaurant spaces becoming available, which creates a lot of value to a new restaurant seeking space in an area.”

There have also been situations where landlords were prepared to invest money to install grease traps and vent hoods to change a second-generation space that had not previously served as a restaurant into a restaurant to attract a tenant willing to pay that higher rent, Zell notes

He also points out that much of the space in neighborhood and community centers is leased to internet-resistant tenants, including restaurants and service retail, like medical and fitness tenants.

“And now probably the highest demand user out there is CBD,” Zell notes. CBD (cannabidiol) shops sell everything from oils and creams to dog treats and gummies.

“They’re willing to pay a premium rent, because they know that many landlords are maybe still a little unsure,” Zell says. “But those deals that we’ve done have typically provided for the tenant to have the right to an early termination in the event the laws change and make their business unprofitable.”

The performance of both malls and neighborhood/community centers will likely be impacted by continuing store closures throughout the second half of the year.

However, the stability of the trends in the second quarter shows how the “retail sector has been able to withstand structural changes in the industry, to some extent,” Reis researchers note.

Global market research firm Coresight Research estimates that announced U.S. store closures could reach 12,000 by the end of 2019. So far this year, U.S. retailers have announced 7,062 store closures compared to 5,864 closures for all of 2018.

However, retail openings are also on the rise. Coresight reports 3,022 store openings announced so far this year, compared with 3,258 in all of 2018.