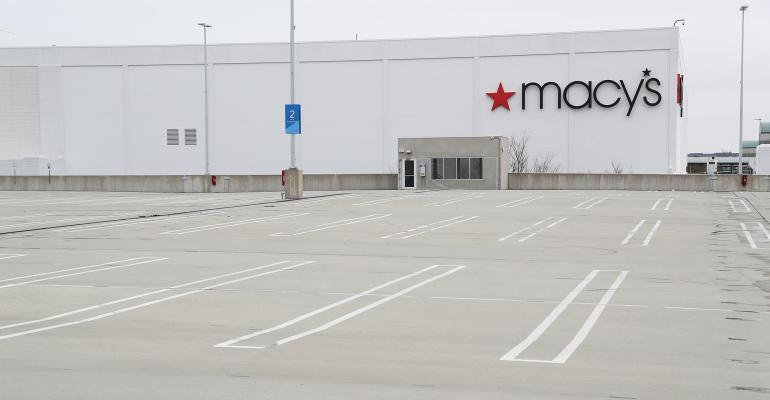 The department store chain expects this to be a “recovery and rebuilding year,” with net sales well below pre-pandemic forecast.

(Bloomberg)—Macy’s Inc. fell as much as 10% after it predicted this will be a “recovery and rebuilding year” for the department-store chain following a difficult 2020, reinstating guidance after withdrawing it last March.

“The company’s annual guidance contemplates continued pandemic-related challenges in the spring season with momentum building in the back half of 2021,” the company said in a statement. It also sees higher margins this year, according to slides accompanying the release. First-quarter net sales will be $4.19 billion to $4.29 billion -- more than the $4.17 billion average analyst estimate.

The return of guidance comes after a better-than-expected holiday quarter for Macy’s. The department-store operator reported that same-store sales, a key measure of retail performance, fell 17.1% at its owned and licensed stores in the quarter ended Jan. 30. While still down sharply, that’s better than the estimate for a 20.4% decline from Consensus Metrix.

Macy’s isn’t alone in seeing a rebound: Sales at U.S. department stores overall grew for the first time in more than a year last month after stimulus checks and holiday returns drove Americans back to the mall, according to Mastercard SpendingPulse. Holiday gift-card redemptions and in-person gift returns -- which often translate into a new, bigger sale -- tend to drive elevated spending weeks after the Christmas season ends.

Macy’s, which also owns Bloomingdale’s and BlueMercury, said all three of its brands exceeded expectations in the holiday quarter. Chief Executive Officer Jeff Gennette highlighted a returned to profitability in particular as reason to celebrate.

Macy’s also gave an update on its three-year Polaris strategy to achieve profitable growth, which it unveiled last year just before Covid-19 hit the U.S. The plan included closing about a quarter of its stores and reducing its workforce by 9% while focusing on high-performing malls and online shopping. It said Tuesday it would be accelerating parts of it, including its focus on digital. Macy’s sees 35% of its net sales coming from digital and the remaining 65% from stores.

Gennette said the company’s off-price Backstage business performed more strongly than the Macy’s business. The department store plans to add about 35 more of those stores this year and will continue to test off-mall concepts in Dallas, Washington and Atlanta.

--With assistance from Karen Lin.