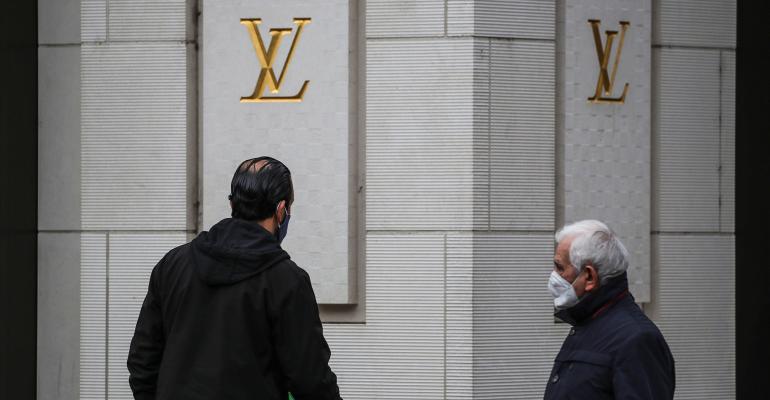 Revenue at the company’s fashion and leather goods unit jumped by 52 percent in the first quarter compared to a year earlier.

Revenue at the fashion and leather goods unit jumped 52% on an organic basis from a year earlier, the company said in a statement Tuesday. Analysts had expected growth of 30%. That division has been the key driver for LVMH throughout the Covid-19 crisis, benefiting from the growth of the Christian Dior and Louis Vuitton brands.

In a sign of the market’s buoyancy, LVMH’s first-quarter performance even topped the same period in 2019, with total organic sales rising 8%. The company’s American depositary receipts climbed as much as 5.4% after the release of results.

LVMH’s sales may indicate how well major fashion houses have been able to sustain demand outside of places like China, which has emerged earlier from the pandemic and reopened shops.

Revenue in Asia excluding Japan jumped 86% on an organic basis from a year earlier, followed by the U.S. which grew by 23%. Sales in Europe meanwhile were still down 9% compared to last year.

“LVMH is the first luxury-good peer to confirm a post-pandemic recovery,” Bloomberg Intelligence analyst Deborah Aitken wrote in a note. The results raise “expectations for the entire sector.”

With catwalks having gone virtual for most of the past year, Dior and Vuitton have tried to entice customers by showcasing collections in sumptuous locales such as the Chateau de Versailles through Instagram and other platforms.

In a sign of how much Asia has emerged from the pandemic, Dior unveiled its disco-inspired women’s ready-to-wear fall collection in Shanghai this week in front of a large audience. That’s in stark contrast to the situation in LVMH’s home country of France, which is in the midst of a third lockdown as it approaches 100,000 virus fatalities.

First-quarter revenue at the luxury giant rose 30% on an organic basis to just under 14 billion euros ($16.7 billion). Analysts had expected 12.7 billion euros.

Despite the gloom in Europe -- where most fashion stores remained closed at the start of this month -- LVMH is experiencing a “surge” in demand from local clients, Chief Financial Officer Jean-Jacques Guiony said during a call with analysts.

“It’s a very good signal,” Guiony said, although it’s “not sufficient to offset the fact that tourists are gone.” European clients are typically making more frequent purchases but spending less, he said, adding that LVMH isn’t planning to reduce its European store footprint.

Tiffany & Co., which officially became part of LVMH in January, has experienced a “strong start” to the year. Guiony said LVMH has increased prices on some of its silver products and he expects the overhaul at the U.S. jeweler to “take years” -- notably for the distribution, merchandising and marketing of the brand.

“We know there’s a lot to be done within the next years and we’ll do it,” he said.

LVMH is currently focused on integrating Tiffany and doesn’t plan to “dilute our efforts” with other acquistions, Guiony said.