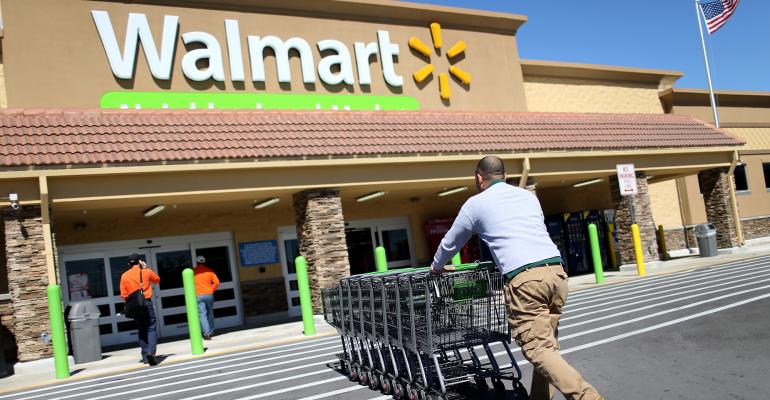 With Goldman Hires, McMillon Moves Closer to Bank of Walmart

A focus on affordability could help Walmart pass muster with key regulators and members of Congress.

By luring a pair of senior bankers from Goldman Sachs Group Inc. to run its fledgling financial technology startup, the world’s largest retailer is gaining even more heft as it seeks to become a one-stop shop for consumers’ financial needs. The move struck fear on Wall Street, which has been begging regulators to halt recent efforts by retailers and startups to begin offering core banking products to millions of consumers.

“These are substantive hires that should serve as an unambiguous signal of Walmart’s seriousness regarding its fintech foray,” said Isaac Boltansky, an analyst at Compass Point Research & Trading. “The regulatory moat that has shielded traditional commercial banks is steadily evaporating and the competitive risks are profound.”

To lead the effort, Walmart plucked Omer Ismail, a longtime veteran of Goldman Sachs who was a key architect of the lender’s consumer efforts in recent years. Ismail will bring along David Stark, who inked Goldman’s partnership with Apple Inc. and oversaw its tie-ups with JetBlue Airways Corp. and Amazon.com Inc.

Ismail’s hiring could be a precursor to Walmart filing an application to become a bank of its own following a Federal Deposit Insurance Corp. rule late last year that paved the way for non-financial firms to seek banking charters. Banks have been adamant that these new charters for so-called industrial loan companies allow firms to enter banking while escaping the capital and other liquidity demands they are forced to follow.

The retailer isn’t currently planning to apply for so-called ILC status, a spokesperson said on Sunday.

Even so, any additional forays into finance may help the retailer bolster its profit after contending with higher costs related to Covid-19, employee wages and supply-chain improvements. Its shares are down about 10% this year, even after it did well in 2020 during the pandemic, benefiting from investments to spruce up its online business in recent years.

Walmart climbed 1% as of 7:19 a.m. Monday in premarket trading in New York.

Chief Executive Officer Doug McMillon has begun to tease some of his ambitions, telling analysts just weeks ago that customers have been asking the retailer to offer affordable financial products and that he wants to find ways to “monetize” the retailer’s vast data. With more than 150 million customers and 5,300 stores across the U.S. -- many of which are open 24/7 -- Walmart would instantly have a consumer base and network of branches that would rival those of JPMorgan, Bank of America Corp. and Wells Fargo & Co.

The goal is to “monetize their most valuable asset -- the frequency and relationship they have with customers across the globe,” John Tomlinson, an analyst at M Science, said in an interview. The research firm estimates the average person goes to Walmart’s stores or website about 30 times a year, almost double the number of visits received by rival Target Corp.

“Anything that drives a deeper relationship with their core business, which is selling stuff to consumers, is their number one goal,” Tomlinson said.

Bankers rue the FDIC decision that they say makes it easier for companies such as Amazon.com Inc. or Walmart to get a foot into their world. The agency approved a final rule that formalized years of agency practice in allowing industrial-loan charters, clarifying the path.

“The true effect of this rule will be to signal that this charter is a viable back-door option for entering the business of banking without the obligations of consolidated supervision by the Federal Reserve,” a trio of banking and consumer groups said in December. “This rule also cuts against the grain of the long-established separation of banking and commerce.”

If it does file for ILC status in the future, it wouldn’t be the first time Walmart sought to become a bank. In 2005, the retailer applied to be an industrial bank in Utah.

The application soon became a flashpoint for critics of Walmart’s broader business practices, such as its treatment of workers and the amount of goods it sourced from China. Walmart’s corporate reputation at the time was under fire amid allegations of gender discrimination and for revelations that a significant number of its associates and their children were either on Medicaid or uninsured.

Back then, Walmart said it wasn’t seeking to open bank branches; rather, it was hoping to use the charter to process credit and debit card transactions internally, a move that would have saved it about $30 million a year at the time. After two years and several delays, Walmart withdrew its application to get out of the spotlight.

Despite the setback, Walmart has continued to push into financial services where it can. The firm’s MoneyCenter locations allow consumers to cash checks, receive tax preparation services and send money overseas. The retail giant also already offers a bevy of credit and prepaid debit cards through partnerships with banks such as Capital One Financial Corp. and Green Dot Corp.

Walmart has so far been tight-lipped about its plans for the new financial technology company, which it formed with the venture capital firm Ribbit Capital. The new company’s board is set to include John Furner, president and CEO of Walmart’s U.S. business, and Brett Biggs, the retailer’s chief financial officer, as well as Meyer Malka, managing partner of Ribbit Capital.

Malka, a native of Venezuela, founded Ribbit in 2012 after he earlier started five financial services firms -- including his first at the age of 18 -- in the U.S., Europe and Latin America. He’s talked often of living through hyperinflation in his home country, which has made the Venzuelan currency worthless and sparked the failure of many of the country’s banks.

Ribbit already has its hands in many of the world’s most successful financial technology startups such as the banking startup Revolut and Credit Karma, which allows consumers to check their credit scores and compare financial products. In some cases, the firm even has had stakes in companies that Walmart already does business with. So it is with Affirm, the installment lender that already provides financing to Walmart customers online.

“When we combine our deep knowledge of technology-driven financial businesses and our ability to move with speed with Walmart’s mission and reach, we can create and deliver financial offerings that are second to none,” Malka said in January.

A focus on affordability could help Walmart pass muster with key regulators and members of Congress who have grown increasingly worried about the fees that banks charge consumers for checking accounts and other basic services.

Take overdraft charges -- the fees that banks assess when a consumer spends more than they have in their account. The country’s largest banks collect $17 billion a year in overdraft fees, and regulators have found that much of that comes from a subset of consumers who overdraw their accounts one or more times each month.

“The big question is, what is their objective?” said Bert Ely, a banking consultant in Alexandria, Virginia. Whatever the retailer’s intentions, the banking industry is on high alert: “The minute you start talking about Walmart and banking, the alarm bells go off.”