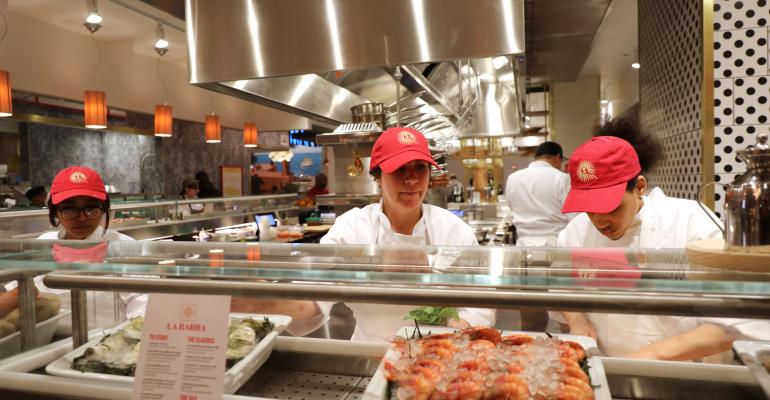 Food Halls in U.S. Malls are Thriving, but is There Fear of Oversaturation?

There’s been an explosion in the number of food halls  across the U.S., and some experts say it’s not about to slow down anytime soon. In fact, activity is ramping up.

A new report by commercial real estate services firm Cushman & Wakefield predicts there will be about 450 food halls open across the country by the end of 2020; that’s a jump from 120 in 2016.

When Cushman & Wakefield first started tracking the food hall sector in 2015, the concept was just getting off the ground with some 70 projects nationally.

Although not all food halls are located inside malls, many are taking over hulking vacant retail spaces or replacing outdated food courts in class-A malls as landlords look for more upscale food and beverage concepts.

If you take out New York City—where 20 percent of the current food hall footprint is located—Colicchio says there’s plenty of potential for growth in many other markets. He sends out two proposals a day for new food halls around the country.

“Food halls are all the rage,” says Taylor Coyne, research manager of U.S. retail for commercial real estate services firm JLL. “The trend isn’t going anywhere. Food isn’t going anywhere. This is how we like to socialize. People are identifying that this is a really big amenity that they want when they go shopping.”

Coyne pointed to a JLL study released in May at ICSC’s RECon that found that 40 percent of customers will choose a mall to shop at based solely on its food offerings.

The study surveyed more than 1,500 U.S. consumers. JLL also found that drawing people into the mall with food often translates into more spending. Transactions increase up to 25 percent at centers with “good food and beverage offerings,” JLL reported, and shoppers who eat at the mall will spend up to 15 percent more on each trip.

“One of the last times I went to one of my local malls, there was a specific restaurant we wanted to go to, but it was a half-hour wait, so I popped into Nordstrom next door and can probably guaranty I bought something,” Coyne notes. She believes that’s a trend among many.

In 2006, the average U.S. mall had roughly 10 percent of its space dedicated to food, beverage and entertainment, according to Cushman & Wakefield. By 2018, that figure grew to 20 percent. And for class-A malls, roughly 25 percent or more of the space is dedicated to food, beverage and entertainment. “It’s that shift of the idea of the celebration of food and great food options; not just a hot dog on a stick,” says Garrick Brown, vice president and head of retail research for the Americas at Cushman & Wakefield.

“The food court was never a place where you said, ‘I will meet you for coffee,’” Colicchio notes. “If you were an adult, it was a fueling station. If you were a kid, it was place to get yourself in trouble.”

There’s now a 180-degree shift, according to Brown.

“The food court is designed to not have you hang out and linger,” he says.” It’s designed for table turnover. It’s designed to be an amenity as you shop. As food halls evolved, they’re designed to get you into the mall as almost the primary attraction. The amenity now is shopping. ‘Oh. While I’m there eating, I’ll go into some stores.” Food halls are driving traffic and malls are seeing the halo effect.

“It brings people into your center in an age when you have to give people a reason to show up,” Brown adds.

Almost every class-A Taubman mall has some sort of food hall, Colicchio notes. “They have quietly embraced the food hall. Simon Property Group, GGP/Brookfield and Related—all of the big developers that are retail-focused have recognized the importance of elevated food and beverage, including food halls in their space.”

For food halls to be successful, it comes down to design and operation, and landlords are being innovative. For example, the American Dream mega-mall, which is slated to open later this year in New Jersey, will feature the first-ever U.S. kosher food hall. Massive Spanish-themed food hall—dubbed Mercado Little Spain and operated by chef José Andrés—opened at the new Hudson Yards mall in New York.

The Asian-inspired food hall at SkyView Center in Flushing, Queens, is scheduled to open in late 2020. Other new food halls open or set to open at malls include the Legacy Food Hall in Plano, Texas; the Inner Rail Food Hall at Aksarben Village in Omaha, Neb.; and chef Michael Mina’s The Street at LA’s Beverly Center, according to Cushman & Wakefield.

Many are driven by well-known chefs and most are in class-A malls.

There are challenges and will be missteps

Brown says currently there are just over 300 U.S. food halls, and he has tracked about a half-dozen closures. Almost all of the closures were what he describes as the smaller “bite-sized” food halls.

“With this proliferation that’s happening, there’s no doubt there’s going to be some missteps,” Brown notes. Those missteps can be the result of poor location, design, operations or putting in the wrong tenant mix.

Food halls will not work everywhere, and they’re complex.

“Food halls and marketplaces—if done correctly—are really a phenomenal amenity that people can truly see the benefit of having in their centers,” Coyne says. “However, they’re incredibly complex and unlike opening up the old food court or even a restaurant.”

So far, for malls the model has been dominated by celebrity chefs, but that poses challenges, according to Brown. Brown likes the celebrity chef-curated model, where a chef is involved in helping pick tenants and decide the direction of a food hall, but not necessarily running the individual stalls.

“It’s better for the food hall operator or landlord to hedge their bet,” he says. “If it’s all about one celebrity chef doing a mix of their concepts, all your eggs are now in one basket, and you could face a giant problem. If you’re dealing with a celebrity chef, all you need is something to happen in their empire to make them vulnerable.”

Another food hall model picking up steam involves a contract vendor operator, who will operate the food hall after the landlord builds it out.

“It’s a very different model and the model is being embraced heartily every day,” Colicchio adds. “When we first started rolling this model out, traditional landlords looked at us like we had three heads.”

One food hall that suddenly closed

One recent casualty in the sector is that of a 32,000-sq.-ft. food hall at Rosedale Center in a suburb of St. Paul, Minn., which closed this month after only eight months of operation. Revolution Hall—an 11-tenant food hall—took over a former, two-story Borders bookstore space at the regional mall.

According to a release, it will reopen with “a new concept featuring local vendors and a new experience.” Unlike a traditional food hall, Revolution Hall was operated by New York City-based Craveable Hospitality Group. Each micro-restaurant operated out of a centralized kitchen.

Some experts say oftentimes the most successful food halls are those with local artisans that create a community.

“Shopping malls began their lives really as centers of communities—before e-commerce,” Colicchio says. “Part of going to the mall was to see your friends or recognizable faces.”

Food halls need to be in high-foot traffic areas that make them community gathering spots.

“Our research and anecdotal evidence [are] showing that food and beverage of an artisanal nature is the most important component that a class-A shopping center can provide if they want to get human beings back in those spaces,” Colicchio notes.