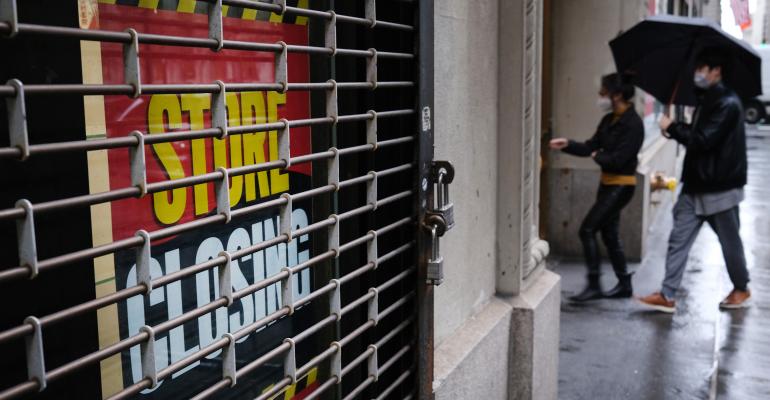 A survey of 86,000 small business owners and employees showed that one-third have stopped operating as a result of the pandemic.

(Bloomberg)—One-third of U.S. small businesses have stopped operating, while another 11% expect to fail in the next three months if Covid-19 conditions persist, according to an April survey.

“The numbers are devastating,” said Sheryl Sandberg, the chief operating officer of Facebook Inc., which helped conduct the survey of 86,000 business owners and employees, in partnership with the Small Business Roundtable.

Most of the closed businesses don’t know how they will find the money to reopen, and don’t expect to rehire employees that they had to cut. “That’s because they think they can’t -- it’s not that they don’t want to,” Sandberg said in an interview. In normal times, small businesses account for two-thirds of U.S. job growth, she said.

Facebook and the Small Business Roundtable planned to do the monthly survey before coronavirus hit, expecting it to paint a much brighter picture of their impact on the economy. The vast majority of Facebook’s advertisers are small businesses, using Facebook, Instagram and WhatsApp to communicate with their customers.

Now, those companies are increasingly relying on the internet. More than one-third of the businesses surveyed say their sales have moved completely online. Facebook has raced to build new tools for them, such as digital gift cards and food delivery buttons, so that they can recover more quickly.

Businesses that are still operating have had to become creative about their strategy, as well. Restaurants are selling to-go cocktails, grocery stores are building plastic shields to protect their workers at the checkout counter, and hair stylists are providing home cutting tips over video chat. Of the businesses that are closed, 19% are still paying at least partial wages to employees who can’t work.

Sam Lee, who operates a ceramic studio and store in San Francisco, has been renting out pottery wheels to members, and picking up their creations curbside. Her decision has helped the business stay afloat. Meanwhile, in her studio, Dusted and Blue in San Francisco, she’s been moving wheel stations six feet apart, preparing for the time she’s allowed to operate.

Lee also worries people will lose out on some of the conversation and community the studio was meant to foster. “We’ll likely have to do smaller classes,” she said. “We’re still waiting to hear what we’ll have to do. What are the regulations going to be? How long is it going to last?”

“If weddings are not happening, people are not going to buy bridal shoes,” she said. Without pop-up sales events and wedding showcases, which drive a lot of the interest in the brand, Kwan has turned to Instagram and tried to improve the company’s placement on search engines.

The survey shows the majority of small business owners and employees are still optimistic about the future. Bella Belle was approved for a small business loan from the government, and said declines in May weren’t as sharp as feared. “It’s a rollercoaster,” she said.

Meanwhile, 29% of workers and owners of small businesses were concerned about bringing the coronavirus home, as the vast majority of small business employees don’t have access to paid sick leave or paid time off. Among hotel, cafe and restaurant employees, more than 90% lack paid leave.

The struggle has been especially acute for women, who still shoulder the majority of the household work in addition to their businesses, and have had to stop working at a higher rate than men in order to balance it.

To contact the reporters on this story: Sarah Frier in San Francisco at [email protected];

To contact the editors responsible for this story: Jillian Ward at [email protected]