Regal Cinemas ended the year having paid a total of 31.67 percent of its rent due, the least of anyone in the retail industry that Datex tracks. The company’s parent, Cineworld PLC, has not updated its financial figures since September, when it reported that in the first half of the year its theater admissions worldwide went down by 65.1 percent and its revenue was down 66.9 percent.

Gym chain 24 Hour Fitness paid 39.74 percent of its rent due for the year. The company just emerged from Chapter 11 reorganization in mid-December, after eliminating approximately $1.2 billion in debt from its balance sheet.

Mexico-based movie chain Cinépolis paid 43.3 percent of its rent in 2020. The company is currently looking to restructure more than $1 billion in debt to stay afloat, according to Bloomberg. It operates 29 movie theaters in the U.S., according to numbers compiled by Statista.

Apparel seller Gap paid 45.38 percent of its rent due for the full year. In the third fiscal quarter of 2020, the company reported a 5 percent uptick in same-store sales. However, a large portion of that increase was driven by sales completed online, which represented 40 percent of all company sales during the quarter. In the company’s earnings report, company executives noted that its physical Old Navy stores, which now make up 75 percent of its real estate portfolio, “continue to be an advantage, supporting not only in-store sales but customers’ omni purchases, through curbside and buy-online-pickup-in-store (BOPIS).”

Women’s boutique operator Francesca’s paid 49.30 percent of its rent due for the year. The retailer, which entered the bankruptcy process in 2020, announced its sale to an affiliate of TerraMar Capital LLC and Tiger Capital LLC as a stalking horse bidder. The company was sold as an ongoing concern, with plans to continue operating at least 275 of is locations.

AMC Theaters paid 54.91 percent of its rent due. The company just announced that it should be able to avoid filing for bankruptcy after securing $914 million in equity and debt capital, partly through an investment deal with Mudrick Capital Management.

Women’s apparel chain Lane Bryant paid 55.25 percent of its rent last year. In December, Lane Bryant’s former owner Ascena Retail Group sold it to an affiliate of Sycamore Partners along with its other brand holdings.

Another former Ascena Retail Group brand, Ann Taylor Loft, paid 56.70 percent of its rent in 2020. Ascena has not put out an earnings report since March 9 of last year.

National pizza chain Little Caesars paid 98.19 percent of its rent last year. Fast food chains, including pizza sellers, have seen sales hold up during the pandemic and many in the sector have been hiring new workers to meet the increased demand, according to Reuters.

Wells Fargo paid 98.32 percent of rent for its retail bank branches in 2020. For the fourth fiscal quarter, Wells Fargo reported that its consumer loans went down 2 percent year-over-year, but average consumer deposits were up by 18 percent.

Supermarket operator SuperValu, which operates brands including Cub Foods, County Market and FoodLand, paid 98.45 percent of its rent for the year. SuperValu’s parent, United Natural Foods Inc., reported that in the fiscal first quarter of 2021, ended Oct. 31, net sales at its chains went up by 5 percent.

Chase Bank paid 98.70 percent of rent on its retail branches in 2020. For the fourth quarter of fiscal 2020, J.P. Morgan Chase reported that its consumer banking loans went up by 1 percent, its consumer deposits went up by 52 percent.

Drugstore chain Walgreens paid 99.04 percent of its store rents last year. For the first fiscal quarter of 2021, Walgreens’ same-store sales went up by 3.7 percent, with a large portion of those sales attributable to Walgreens pharmacies.

Sportsman’s Warehouse, an outdoor sporting goods retailer, paid 99.22 percent of its rent for 2020. In the third quarter of 2020, the most recent period for which results are available, Sportsman’s same-store sales rose by 40.9 percent.

Furniture seller Big Lots paid 99.40 percent of its rent for the year. The company reported a 17.8 percent increase in same-store sales in the third quarter.

Yet another supermarket operator—Shop Rite—paid the most rent of any retailer tracked by Datex last year with 99.91 percent. 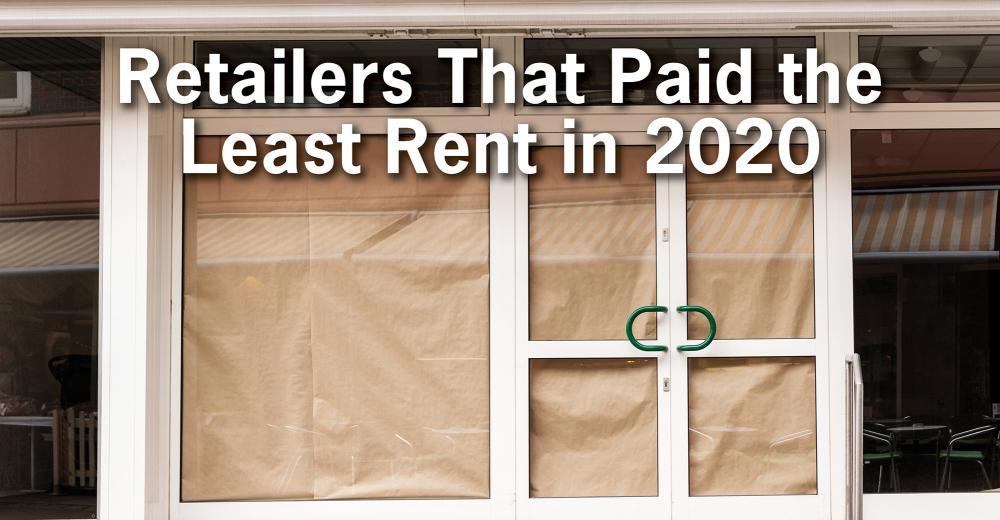