Morningstar Investment Conference
brought to you by 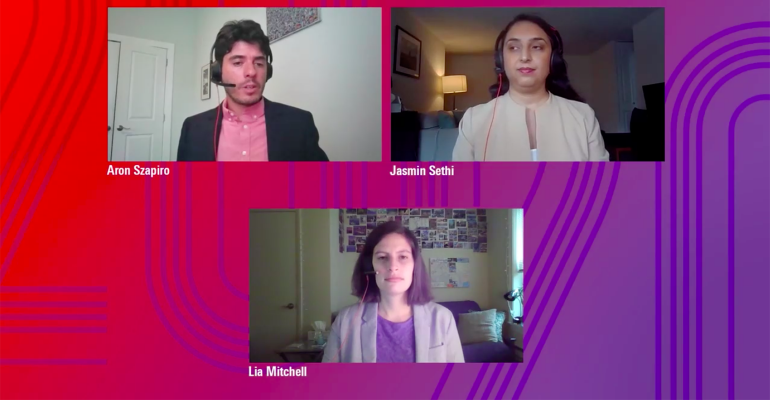 What Is ESG Investing's Future if Democrats Win Big in Elections?

A Morningstar panel also discussed the firm's concerns over the Labor Department's proposed rules on fiduciary exemptions, stressing the importance of clarity in SEC and DOL enforcement.

Advisors and investors should expect legislative support for sustainable investing should Democrats win the White House and both houses of Congress in November's elections, according to a senior analyst at Morningstar.

Aron Szapiro, the director of policy research at Morningstar, was one of several panelists during a virtual discussion at the firm's annual conference this week on the Department of Labor's proposed rule on ESG investments in 401(k) plans, as well as the future of financial services regulation in a potential Joe Biden administration. In recalling an eye-opening meeting he had with the House Education and Labor Committee earlier this summer, he saw the zeal members had for the possibilities of sustainable investing.

“I was surprised by how much the members were focused on this DOL rule,” he said. “Democrats and Republicans see things very differently on sustainable investing, and I think that’s unfortunate, because you really do have a consensus view building among asset managers in an industry that is not related to any kind of partisan bickering on this."

With the election fast approaching, Szapiro speculated that there could be an attempt to revoke the DOL’s new fiduciary exemption proposal and reexamine Reg BI, or even amend the 2010 Dodd-Frank legislation to make standards of conduct uniform for broker/dealers. He also detailed the firm’s concerns with the DOL’s proposed regulations targeting ESG investing in 401(k) plans. Szapiro said there was ambiguity about ESG investing in each of the previous four presidential administrations, which volleyed back and forth between open-mindedness and skepticism about sustainable investing practices. But while ambiguity has been ever-present on the governmental level, Szapiro said that ambiguity was diminishing on the investor level, creating pressure on the Trump administration to create new, clearer rules.

“Most in the industry hoped that that clarity would have said ‘the water’s fine, come on in. ESG investments can be a useful, important part of 401(k) plans and using investments that take into account ESG considerations is not a problem on its face for a fiduciary,’” he said. “But they’ve taken the opposite approach.”

Among other things, the rule would purportedly disallow plan fiduciaries from offering ESG investment products that may heighten fees, boost risks or lessen returns for the purpose of achieving nonfinancial goals. To Szapiro, the rule seemed unnecessary, claiming that ERISA fiduciaries already understand that they must place financial considerations first and foremost. He also noted the pronounced growth in sustainable investing, with $20 billion in flows toward sustainable funds in 2019, four times the amount in the previous year.

“If you knew nothing about this, you’d think ‘oh, there is some huge problem the Department is trying to solve. There are people slinging sustainable funds into 401(k) plans, and they’re doing really badly and they cost a lot,’” he said. “But that’s just not what we’re seeing at all in the data.”

Jasmin Sethi, an associate director for policy research at Morningstar, said advisors and clients alike would benefit from greater clarity about the situations in which SEC and DOL enforcement measures are applicable. While she praised aspects of both the SEC’s Reg BI and the DOL’s newly proposed fiduciary exemption, it was important for investors to understand where protections began and ended under each rule. RIAs, for example, must adhere to a fiduciary standard according to the Investment Advisers Act of 1940, but whether broker/dealers are subject to such a standard under ERISA when making recommendations can depend on several factors.

“It’s a very complex world for investors, and they need to know clearly when their rights and remedies are governed by the SEC, by the DOL and by both,” she said. “While the Form CRS tells them in the SEC world whether they’re getting brokerage or RIA services, it’s not clear what’s going to tell them whether they’re covered by the SEC and the DOL. And what does that mean if something goes wrong; what rights and remedies do they have and who do they turn to?”

Sethi detailed the lack of clarity in the DOL’s newly proposed rule, which she said could be finalized before the end of the year or even before November’s presidential election. In the rule, the DOL reestablished a five-part “test” originally passed in 1975 to determine whether a broker’s recommendation is subject to fiduciary protections under ERISA and extended that five-part test to rollover recommendations (the test was discontinued in the Obama administration’s own fiduciary rule, which was eventually overturned in federal court).

Therefore, if a rollover does not meet the mandates of the test, the recommendation may not be subject to ERISA fiduciary obligations. According to Sethi, there is a complication about rollovers and one particular part in the test, which questions whether a recommendation is part of an “ongoing” relationship with a client (in which case it would fall under fiduciary scrutiny) or is a one-time recommendation.

“It’s very difficult with a rollover to know whether it will be [beginning or part of an ongoing relationship]; it’s often the beginning of a relationship. In fact, we think many brokers would want it to be the beginning of a relationship with a client, either with the broker or potentially bringing that individual in to be an IRA client at the same firm,” she said. “We think it makes sense to view this point-and-time advice as part of an ongoing relationship, and we made that recommendation to the DOL, that they view all rollover advice as satisfying that, and therefore bringing all of that into this fiduciary rule.”