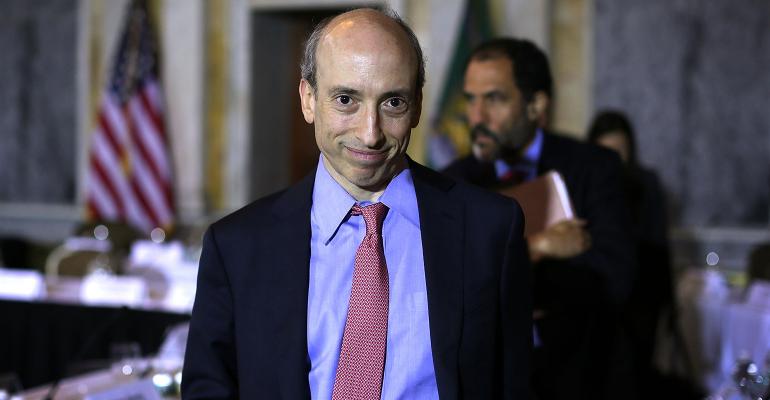 The U.S. Senate confirmed Gary Gensler Wednesday as the next chair of the Securities and Exchange Commission. Gensler, who succeeds former Chair Jay Clayton, is taking the reins at a time when the SEC is grappling with such issues as climate-related risks and the continued implementation of Regulation Best Interest.

The final vote count was 53-45, with Democrats as well as a small number of Republican senators voting to confirm him.

President Joe Biden nominated Gensler in mid-January as his pick to lead the commission; Allison Herren Lee is currently the acting chair. In March, Gensler testified during a nomination hearing before the U.S. Senate Committee on Banking, Housing, and Urban Affairs; the committee voted 14-10 in favor of Gensler later that month, leaving a full Senate vote as the final step. 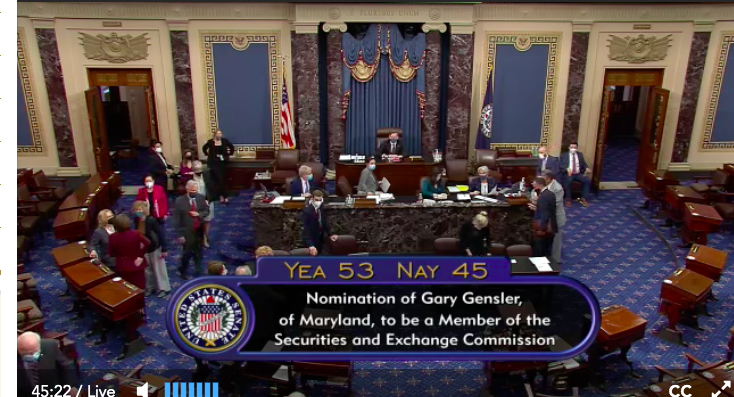 Gensler also has a long history with Wall Street, joining Goldman Sachs in 1979, spending 18 years with the firm. He later served as assistant secretary of the Treasury during the Clinton administration, as a senior advisor for U.S. Sen. Paul Sarbanes, and currently works as a professor of the practice of global economics and management at the MIT Sloan School of Management. He also led the Biden administration’s transition team on financial policy and securities regulations.

“He will be joining a dedicated staff that works tirelessly day in and day out on behalf of investors and our markets,” they said. “We welcome him back to public service and look forward to working together to execute our vital mission.”

In a floor speech on Tuesday afternoon, Sen. Sherrod Brown (D-Ohio) signaled his support for Gensler.

“Mr. Gensler is an experienced public servant with a strong record of holding Wall Street accountable. He’ll lead the SEC at a time when it’s become more and more obvious to more and more people that the stock market is detached from the reality of working families’ lives.”

But Sen. Pat Toomey (R-Pa.) spoke in opposition to the nomination, saying he was concerned where Gensler might lead the SEC, and questioned the commission’s place in addressing issues like climate risk, diversity and political spending.

“It’s certainly not the role of the Securities and Exchange Commission, an independent financial regulator with no accountability to voters whatsoever, to address difficult, challenging, sometimes contentious political, cultural and social issues,” he said. “I have to say nothing that Mr. Gensler said at his hearing or since has alleviated my concerns.”

Gensler’s confirmation means the SEC will have 3-2 Democratic majority; while many of the agency’s decisions are bipartisan, there has been some recent disagreement on issues like climate-related risks and ESG scrutiny. The commission’s Division of Examinations named ESG as one of its 2021 exam priorities and released a risk alert last week on ESG compliance concerns.

Gensler also joins the commission as it undertakes its first full year of industry compliance under Reg BI, which was passed last June.

During his Senate testimony in March, Gensler was quizzed about numerous issues, including whether climate risk disclosures by public companies would provide aid to investors. Additionally, some Republican senators questioned whether minor financial expenditures by corporations in political spending would have to be disclosed to investors, and he replied that the Supreme Court had already defined materiality in a way that benefited investors.

In a statement congratulating Gensler on his confirmation, Insured Retirement Institute President and CEO Wayne Chopus said he expected the commission would be playing “a critical role” in helping the nation recover from the pandemic.

“IRI looks forward to working with Chair Gensler and the commission to address the retirement security challenges America's workers and retirees are facing as they seek to save for and produce sustainable lifetime income during their retirement years,” Chopus said.