SEC Report: Investors Like Form CRS But Don’t Understand It

A new SEC report tests the usability of Reg BI's Form CRS. But some say it points to investor confusion and doesn't test actual comprehension of the document.

While the Securities and Exchange Commission held several investor roundtables to gather feedback on its Regulation Best Interest, industry groups and investor advocates have been calling for rigorous testing of the Customer Relationship Summary, a disclosure document that’s part of the proposal. The SEC’s Office of the Investor Advocate released a research report Wednesday, in conjunction with the RAND Corporation, testing investors’ use of the four-page mockup form.

The study included a survey of 1,800 American adults, as well as in-depth interviews with investors in Denver and Pittsburgh.

Responses to the survey portion were generally positive, with a majority of investors saying the form would help them make more informed decisions and that it helped them better understand key terms and conflicts of interest. But the interviews indicate that there were areas of misunderstanding and aspects of the document that need to be improved.

“They did this survey and investors say, ‘Yeah, this document’s really helpful; it’s so useful and I understand it,’” said Barbara Roper, director of investor protection at the Consumer Federation of America. “Then they do the follow-up interviews where they actually can determine investors’ level of understanding, and it’s clear they don’t understand it.”

The quantitative survey gathered opinions about the length, importance and ease of understanding of each section of the form, as well as preferences on the format and delivery, comfort level with key questions, likelihood investors will look up disciplinary history and opinions about the usefulness.

Nearly 90 percent of respondents said the form would help them make more informed decisions about their investment services. Eighty-five percent thought the side-by-side comparisons of a broker/dealer versus an investment advisor were helpful in deciding between the two. Yet, nearly 57 percent of investors believe the CRS is too long, and about six in 10 respondents said they preferred a question-and-answer format over the current design. 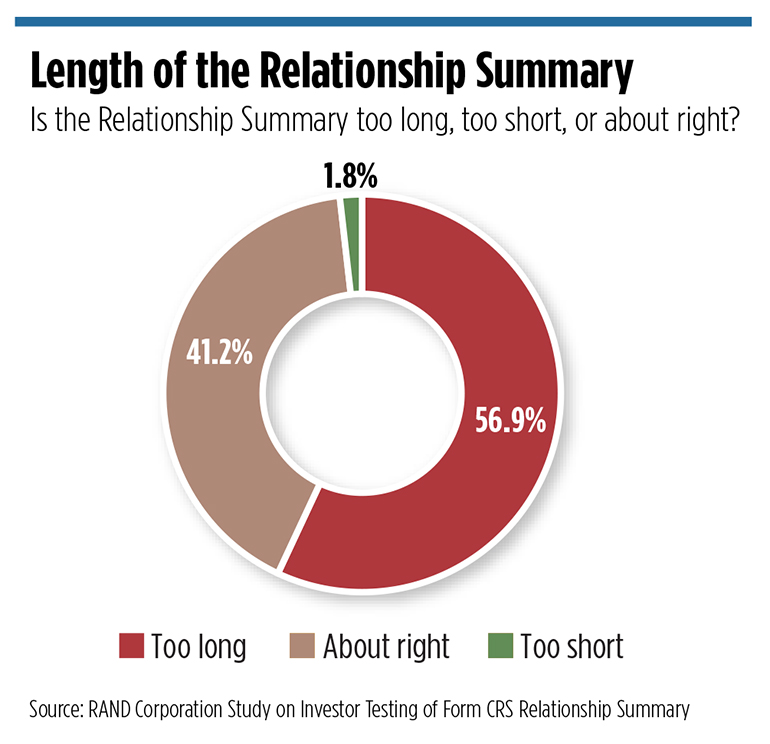 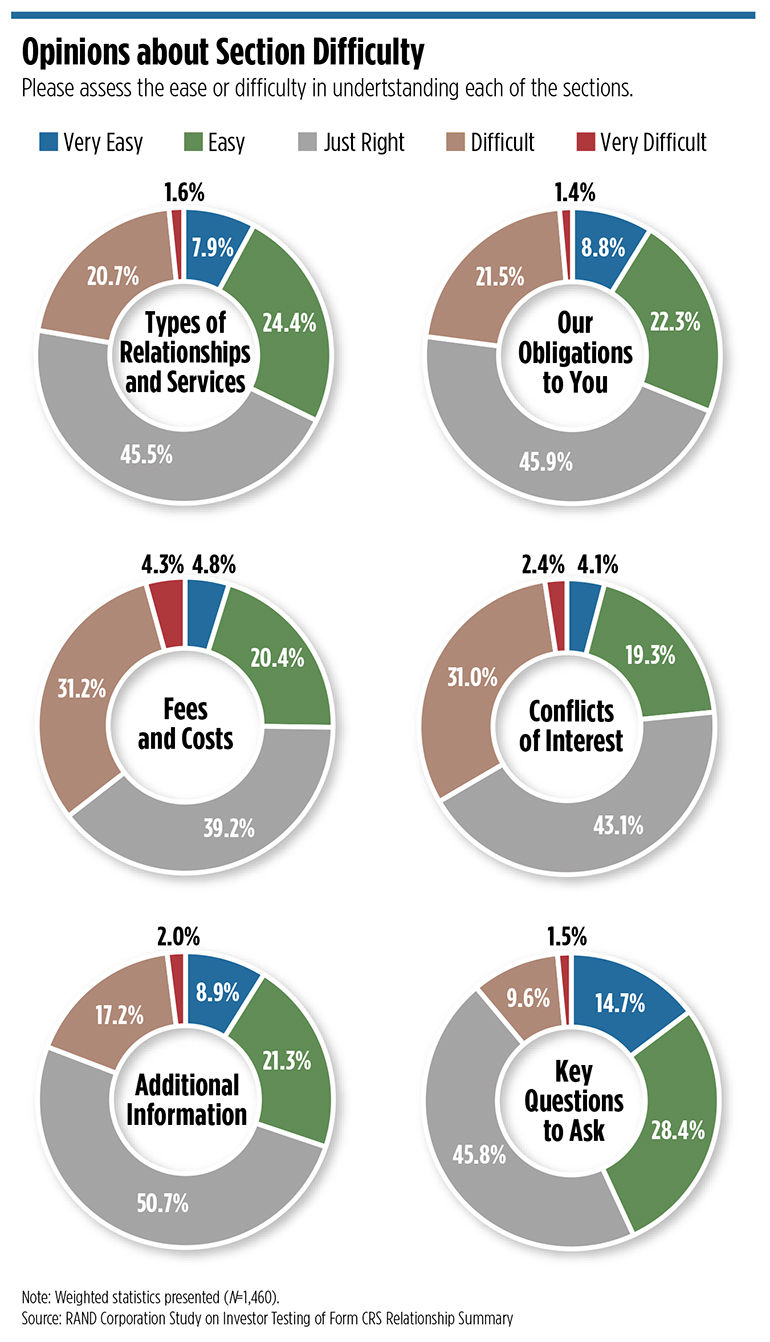 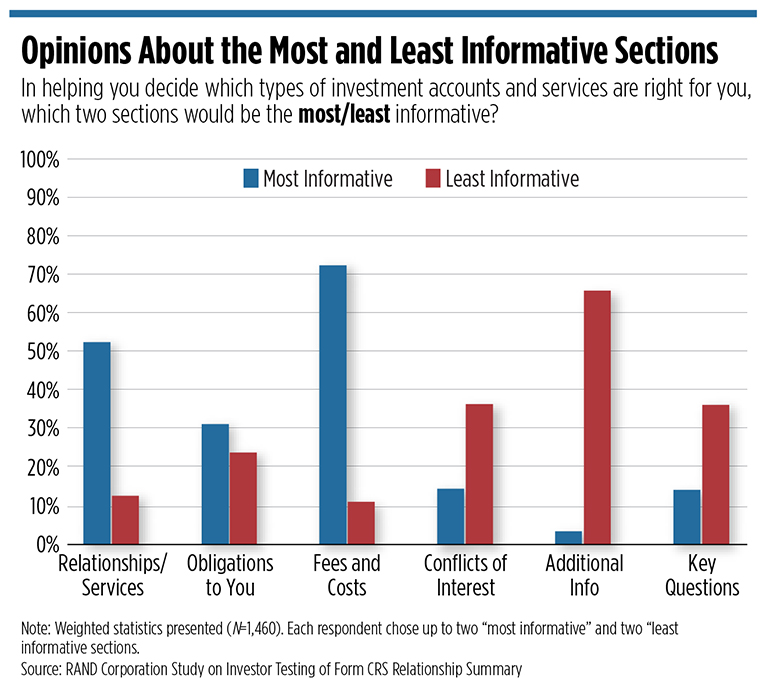 The mockup has been criticized by some in the industry as using too much industry jargon, and, indeed, that came through in the interviews. Certain phrases, such as “additional services” and “might pay more,” brought concern to the participants. They also wanted more definitions of certain words, such as “transaction-based fee,” “asset-based fee,” “discretionary account” and “non-discretionary account.”

The Fees and Costs section was overwhelming to participants, with many not understanding certain words like “markup,” “markdown,” “load,” “surrender charges,” “wrap fee” and “custody.”

“Some participants had never heard of the word, whereas others had heard it but did not know what it meant in this context,” the report said.

But some argue the RAND report doesn’t test for actual comprehension of the CRS, but rather whether investors subjectively believe they understood it. The report says it was “not designed to objectively assess comprehension.”

“This literally means that investors may think the disclosure is ‘great’ and also not have a clue as to what it means,” said Knut Rostad, co-founder and president of the Institute for the Fiduciary Standard.

The Investment Adviser Association was also disappointed it did not test comprehension.

“We think this raises a significant question about whether they accurately understand the information in the form,” said Gail Bernstein, general counsel of the IAA.

The group had also recommended that the SEC test alternative forms, such as the ones submitted by commenters.

“We’re disappointed that they didn’t happen because this would’ve given a clearer picture of what kinds of disclosure is or isn’t effective,” Bernstein added.

Roper admits there is a lot of good information in the report that the SEC could use to improve the form.

“This should be the start of a process in which the SEC works with disclosure design experts to fix the language and format and presentation of the information to ensure that it actually does clear up investor confusion about the differences between brokerage and advisory accounts,” she said. “The question is, will the SEC point to the survey results that say ‘investors love it’ as an excuse to move forward or will they acknowledge the testing results, which show that the form simply doesn’t work and that there’s a lot of work to be done in order to fix it?”