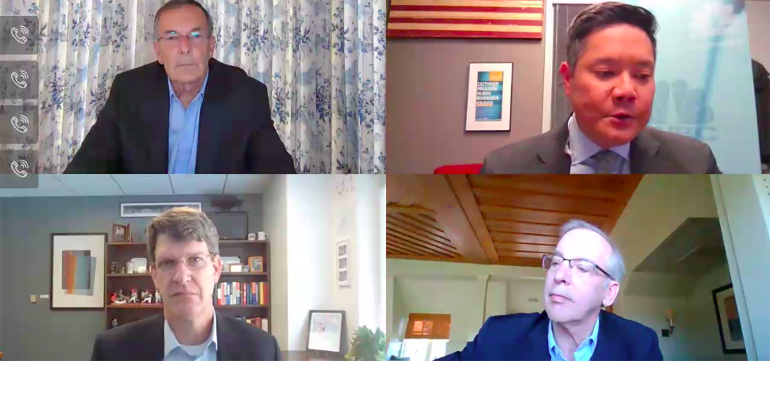 Speaking at the custodians' conference, the panel said a divided Congress would likely mean a diminished COVID-19 stimulus as well as a more difficult road for President-elect Joe Biden's tax policies.

Investors are feeling more stable today with a victor in the 2020 presidential election, along with indications from Pfizer this morning that a successful vaccine is one step closer to distribution.

But in a timely Schwab IMPACT panel on how changes in Washington, D.C., could affect investors during the next four years, Greg Valliere, the chief U.S. policy strategist for AGF Investments, said negotiations between President-elect Joe Biden and a Republican U.S. Senate led by Majority Leader Mitch McConnell would potentially mean we could expect a lower stimulus than the approximately $2 trillion CARES Act.

Some Republicans in the Senate have preferred a price tag closer to $500 billion, but Vallerie stressed Biden could be a factor, as some of his team have hinted that they may reach out to Congress before the holidays about the contours of a stimulus bill.

“$2 trillion is just not going to make it,” Valliere said. “I think it’ll be more like $1 trillion and it may come later rather than sooner.”

Part of the reason quick fiscal stimulus is so necessary is that the Federal Reserve is out of firepower; by continuing to push interest rates to low levels, they have done about 95% of what they are able to do, according to William Dudley, former president of the Federal Reserve Bank of New York. While some recent economic news, like lower unemployment levels, indicated some improvement in the economy, Dudley cautioned that these assessments were mostly a “rearview mirror” look at the state of the economy a month ago. The improvements the U.S. has chalked up so far likely came from the effects of the initial stimulus in the CARES Act and business reopenings during the summer.

“The trajectory of the pandemic right now is quite bad, and that’s probably going to lead to a much more muted improvement in the economy as we go forward,” Dudley said. “But the tricky part on the fiscal side, is what they do, and what is the President’s attitude? Will the President sign a bill the Democrats and McConnell agree on?”

The lack of a more significant “blue sweep” in Congress should also make investors reassess their prior assumptions about forthcoming federal tax policy, as the incoming Biden administration’s tax and fiscal priorities would be a herculean sell in a Republican Congress, according to Michael Townsend, the vice president of legislative and regulatory affairs at Charles Schwab.

But control of Congress isn’t yet certain; if Democrats win January elections for two Senate seats in Georgia, the Senate could conceivably split down the middle between the parties, with Vice President-elect Kamala Harris able to act as a tiebreaker, if necessary.

“Even if Democrats win those two Georgia seats, can you make those changes in a 50/50 Senate?” Townsend said, noting that there were some moderate Democrats, like Sen. Joe Manchin (D-W.Va.) or Sen. Kyrsten Sinema (D-Ariz.), who wouldn’t necessarily be a rubber stamp on a Biden agenda. “Big, big tax changes are unlikely, even in that 50/50 scenario. I think that’s a big change from where people’s heads were at.”

Townsend believed it was unlikely that we’d see substantive changes to estate taxes (which are set to sunset in 2024) in a Republican or evenly split Congress, at least in the short term. Valliere believed the close split in the Senate also made it unlikely Biden would nominate Elizabeth Warren for treasury secretary. Instead, Valliere said the “odds-on pick” was Fed board member Lael Brainard, who headed the international affairs division of the Treasury Department during the Obama administration and would be the first woman to ever fill the role.

Valliere also stressed that the split election could be an indication that voters want to slow momentum on priorities like dramatically expanding Obamacare and passing a Green New Deal, and that Washington’s trajectory could depend on the working relationship between the president-elect and majority leader.

“The Senate outcome was unambiguously positive for the markets. For President Biden to get along with Mitch, they’re going to have to move to the center,” he said. “The extremes will be disappointed."