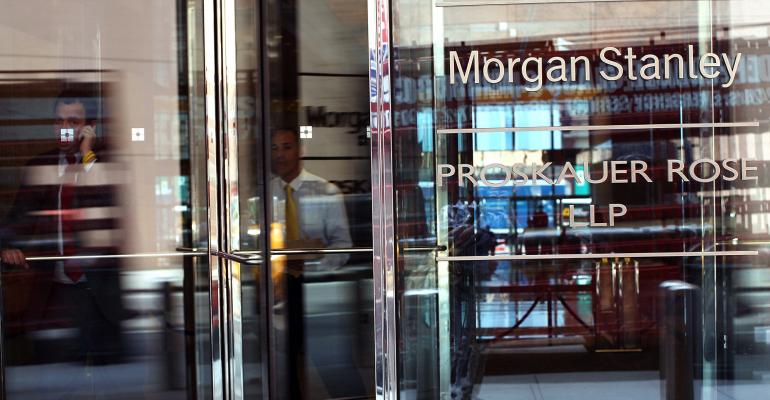 The Morgan Stanley–recommended law firm that represented the transitioning advisors told them their nonsolicit agreements with Schwab were unenforceable, according to their lawsuit against the lawyers.

Two advisors who were fired shortly after joining Morgan Stanley from Charles Schwab in 2019 are accusing their broker-recommended law firm of essentially sanctioning the solicitation of the advisors' previous clients.

The duo are suing the Morgan Stanley–recommended law firm who oversaw their transition for malpractice, arguing they put the interests of the wirehouse ahead of their own. The law firm says the advisors acted against their advice when they took confidential client information from Schwab and claims they can prove the advisors understood the implications of using the data to solicit the clients.

According to their complaint, in early 2019 Armstrong and Kiefner met with Morgan Stanley directors about joining the firm from Schwab's private client advisory business. They say they were advised by those directors that the nonsolicitation agreement they signed with Schwab, barring them from using client information should they leave the firm, wouldn’t hold up to “any kind of legal dispute,” and that Morgan Stanley would refer (and pay for) legal counsel for Armstrong and Kiefner to guide their transition, according to their complaint.

Shumaker, Loop & Kendrick, and Taaffe, agreed to work with the two men, but Armstrong and Kiefner allege that Taaffe didn’t reveal that the firm had previously represented Morgan Stanley, and that there were “irreconcilable” conflicts between the two advisors and the law firm.

According to their complaint, the lawyers agreed that the nonsolicitation agreement signed with Schwab, as well as the mandate that advisors give 28 days notice when resigning, were not legally enforceable.

Schwab sued the two advisors in New Jersey federal court on April 5, 2019, claiming that a review of the duo's computer activities showed Armstrong and Kiefner removed confidential information about high-net-worth clients and used it to lure the clients to Morgan Stanley.

Shortly after Schwab filed its complaint, Morgan Stanley fired the two advisors, and they quickly learned the Shumaker law firm would no longer represent them. The advisors claimed the firm’s departure left them without legal counsel, and they were served with a permanent injunction they said effectively barred them from conducting business with any previous Schwab clients in any capacity.

“As a result, defendants’ actions and inactions, as well as negligent misrepresentations and omissions, have caused plaintiffs to suffer significant financial injury by ruining their professional careers and livelihoods, which plaintiffs spent decades building,” the complaint reads.

But the response from Shumaker, Loop & Kendrick argued that Morgan Stanley independently decided to fire Armstrong and Kiefner after its own internal review, without input from Taaffe or the firm. In fact, the first time the firm became aware that Armstrong and Kiefner had taken confidential documents was from the Schwab complaint, according to their response.

In a separate statement, Taaffe noted the firm had represented thousands of advisors over three decades, and it's unlikely the firm would fail to recognize, and advise on, the legal nuances of advisor and client transitions.

“As anyone in the industry knows, litigation often results when customers choose to leave as is their right and follow a departed financial advisor to their new firm,” he said. “It is critical that Shumaker’s internal processes confirm that recruits are properly advised through numerous conferences and in writing.”

The firm argued they advised Armstrong and Kiefner on the nonsolicitation issues, claiming many of their assertions were false and that the duo had acted on their own volition when taking client information.

The firm says Taaffe had advised both Armstrong and Kiefner to seek their own counsel to review their employment agreements, and that the two advisors had been told that the law firm “could not be adverse to Morgan Stanley” and would have to withdraw if a conflict arose.

The law firm says Armstrong and Kiefner knew what was permissible to take from Schwab, and included two purportedly signed acknowledgments from them indicating that “only limited information” should be retained for use in contacting old clients.

Stephany D. McLaughlin, a member of Eccleston Law, one of the firms representing the advisors, said any attorneys suggested by Morgan Stanley to transitioning advisors should have properly consulted clients on whether the solicitation agreements could be enforced.

McLaughlin claims the attorneys did not do that, because having that information could have dissuaded Armstrong and Kiefner from joining Morgan Stanley.

“If every advisor knew that the lawyer being provided by the brokerage firm during the transition may be rendering advice that’s not in their best interest, they may choose to have their own counsel ... and they might make different choices if provided their own legal counsel,” she said. “Obviously, the brokerage firms don’t want to talk about that because it would seriously dampen their own recruiting.”

This type of dispute is bound to increase given that many firms have stepped away from an agreement meant to limit legal actions against departing brokers, she said.

The so-called “Broker Protocol” began in 2004 as a kind of cease-fire between brokerage firms from suing brokers who jumped from one firm to another. The agreement meant brokers could take limited client data with them, despite nonsolicitation agreements.

But in the past several years, firms began leaving the protocol. UBS and Morgan Stanley both left in 2017; Schwab was never a member.

“Now that they no longer have that agreement, this sort of scenario is going to become more and more common,” McLaughlin said.

But conflicts between lawyers and advisors transitioning into a new firm aren’t often about client data and nonsolicitation agreements. More often, it is about understanding whether the lawyers are working for the transitioning advisor, or for the firm that advisor is joining, according to Sharron Ash, the chief litigation counsel for MarketCounsel.

“When you're handling data in the context of a transition, everybody’s held to the same standard as to how that data needs to be handled; what you can take, what you can’t take,” she said. “The conflict is that recruits have to know what their relationship is with the attorney whose advice they’re relying upon.”