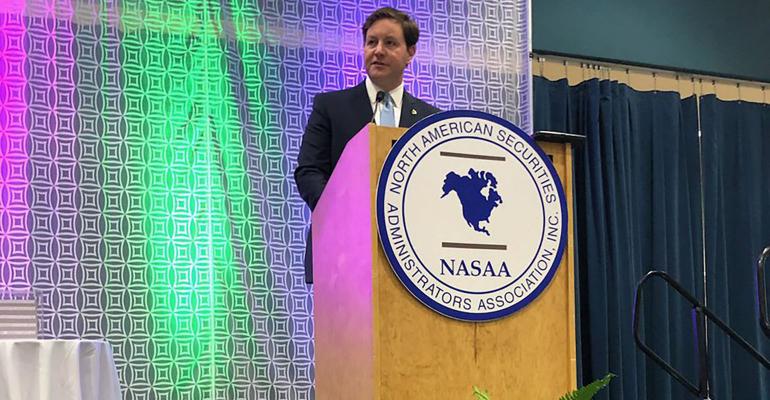 Despite Some States’ Actions, NASAA is Focusing on SEC’s Reg BI

The states can do what they will, but the association of state securities regulators is focused on making its position clear on Regulation Best Interest.

After the Department of Labor’s fiduciary rule was struck down by an appellate court last spring, some state regulators resolved to take the issue into their own hands. New Jersey, for example, recently announced plans to introduce a rule that imposes a uniform fiduciary standard. Nevada passed a fiduciary statute prior to the death of the DOL rule, and New York proposed regulations that would require sellers of life insurance and annuities to act in the best interest of clients, raising standards even as the U.S. government delays its fiduciary rule. Other states also have standards in the works.

But contrary to what you might think, the North American Securities Administrators Association, the voice of state securities agencies, will not be advocating for fiduciary duty at the local level. Instead of having a hodgepodge of rules, the group believes a uniform standard across the states is a better strategy. And Michael Pieciak, NASAA’s new president, believes the Securities and Exchange Commission’s Regulation Best Interest is the clear path forward. Pieciak, 35, is also the Vermont Commissioner of Financial Regulation.

“My focus, and I think our organization's focus, is on getting comments to the SEC on Reg BI,” Pieciak said in an interview with WealthManagement.com. “That’s where we’re putting our efforts, to get some clarity around that. I think that’s where we’ll see the biggest bang for our buck.”

NASAA submitted two comment letters to the SEC, outlining changes they’d like to see to the regulation. For instance, the group said it should be called the “Broker-Dealer Standard of Conduct” to avoid merging the broker/dealer’s best interest duty with an investment advisor’s fiduciary duty. The group also believes the rule should prohibit certain practices, such as sales contests and other financial incentives.

The states, of course, can do what they like, individually. And some feel very strongly about it. Massachusetts Secretary of the Commonwealth William Galvin has said he will take state action if the SEC’s standard doesn’t go far enough.

Vermont, however, won’t be advocating for a local fiduciary standard, Pieciak said. And most NASAA members want a uniform standard.

“The issue, when you get down to the local level, is that you don’t necessarily have uniformity,” he said. “You might have one state doing something on the fiduciary duty rule, and another state might be doing something but interpreting it a little bit differently. And then that obviously causes some compliance issues.”

To be sure, the state securities regulator isn’t always the one in command, he notes. When Nevada proposed its standard, for example, the securities division wasn’t consulted.

Promoting uniformity across its membership is one of Pieciak’s big initiatives during his one-year term as president. Model rules are one way the organization accomplishes that. The idea is, NASAA creates these rules, then the 50 states adopt them in their jurisdiction.

But that can be difficult when dealing with 50 different state legislatures, so the organization is rolling out a new legislative program next spring. The group currently runs a pilot program, where members invite a key legislator or key government official to the spring policy meeting, where they’ll learn about NASAA and the role of state securities regulators.

“What we’re trying to do here is give our members something to help them foster relationships back home in the state legislatures,” Pieciak said. “Help them get advocates back home for model laws because, as you know, we can all be on the same page as regulators but if we need a model law passed, that’s 50 state legislatures.”

In a recent survey of NASAA members, “preservation of state authority” was top of mind. A bill introduced in the House of Representatives in February would severely limit state securities regulators and eliminate a level of investor protection. NASAA continues to advocate against the bill, but Pieciak believes there’s a limited amount of bandwidth to get that bill through the current Congress.