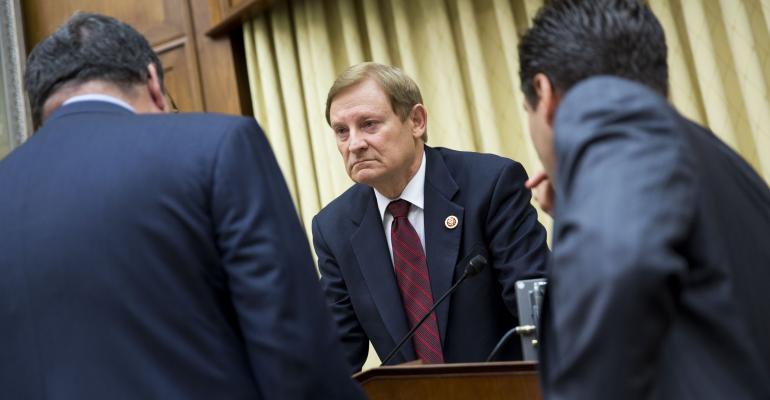 Initially proposed by Maxine Waters (D-Calif.) last April, the “Investment Adviser Examination Improvement Act of 2013 hasn’t made it out of committee. The proposed legislation—which is an updated version of her 2012 bill—called for more advisory firm examinations by allowing the SEC to charge investment advisors an annual fee. GovTrack currently only gives H.R. 1627 a 1% chance of getting past committee.

Bachus, who will be retiring at the end of this term, signed on as a co-sponsor on Thursday. The move came as a surprise to many, as the Alabama congressman previously supported SRO legislation that would place advisor examinations under the supervision of a membership organization, rather than the SEC.

Two additional Democrats, David Scott (D-Ga.) and Steven Horsford (D-Nev.) also signed on as co-sponsors on Thursday. So far, 20 members of the House Financial Services Committee have stepped up to support the bill, but Bachus remains the only Republican to do so.

The current dogfight over funding for the Securities Exchange Commission’s 2015 budget (in which only $1.4 billion out of the requested $1.7 billion budget was approved) is forcing members of the U.S. House of Representatives to seriously consider other funding mechanisms, including proposed legislation that would allow the SEC to impose and collect fees to fund advisor examinations.

On Friday, a dozen Democrats signed on as co-sponsors. Additionally, in a letter to current chairman Jeb Hensarling (R-Texas) on Friday, Waters called on the House Financial Services Committee to hold a meeting on the proposed user fees. Waters pointed to the fact that the SEC oversees 11,000 advisers, but only performs examinations on them once every 12 years. Furthermore, Waters noted that 40 percent of advisers have never been examined. As of Thursday, The chairman has not yet responded to the request.

Waters also pressed the issue Monday night during a debate on the House floor on the 2015 appropriations bill for financial services and general government (H.R.  5016). Waters attempted to add three amendments to the bill, including a provision allowing the SEC to impose and collect user fees. Republicans objected to the amendment and it was dropped without a vote.

“The recent activity is encouraging, but time is definitely running short for this Congress,” David Tittsworth, president and CEO of the Investment Adviser Association, said Thursday.

With Congress quickly approaching its month-long August recess (from Aug. 1 to Sept. 8) and only 10 days of session left until the end of the 2014 fiscal year after that, there's essentially only a few weeks left to enact legislation.  “Where there’s a will, there’s a way,” Tittsworth says. “Is that going to happen now? Probably not.”

The Financial Planning Coalition—made up of the CFP Board, the Financial Planning Association and the National Association of Personal Financial Advisors—praised Bachus’ involvement, saying his and other members’ support highlighted the legislation as a sensible solution. “This support demonstrates that investor protection is not a partisan issue and we expect to see the number of co-sponsors on both sides of the aisle continue to grow,” the group said in a statement.