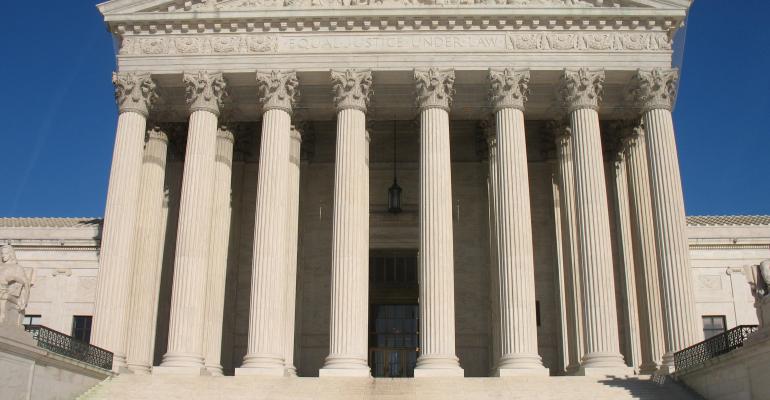 A six-year-old FINRA arbitration case has worked its way up to the Supreme Court, after the investor found out that the arbitrator’s husband just happened to be a Wharton School professor and consultant for several investment firms, including the one being sued. Is it a conflict of interest? While the Supreme Court hasn’t yet decided to hear the case, it’s one to closely watch, as it could set a precedent over the value of FINRA’s hotly debated arbitration process. From securities lawyer Bill Singer’s blog:

It started out as an investment. Then it was an investment that went sour, and badly. Then the public customer filed an arbitration. He lost. That arbitration was appealed to a federal district court. He lost again. Then to a federal circuit court of appeals. He lost again. Now it appears headed to the United States Supreme Court. Regardless of whether the highest court grants certiorari and agrees to hear the appeal, the fact pattern does not represent a glowing endorsement of Wall Street's mandatory customer arbitration.

In a Financial Industry Regulatory Authority (“FINRA”) Arbitration Statement of Claim filed in April 2008, public customer Stone asserted causes of action including fraud, breaches of contract and fiduciary duty, and unsuitability in connection with his investment in the Bear Stearns Asset Backed Securities Partners, L.P. hedge fund. Claimant Stone sought $7,600,000 in compensatory damages plus punitive damages, and interest, fees, cots, expenses. At the conclusion of the hearing, Claimant requested $5,776,968.00 in out of pocket losses plus interest in the amount of $1,537,141.00. In the Matter of the FINRA Arbitration Between Laurence Stone, Claimant, vs. Bear Stearns. & Co., Inc., Bear Stearns Securities Corp., Bear Stearns Asset Management, Inc., and Colin P. Gordon, Respondents(FINRA Arbitration 08-01185, July 11, 2011 ).

In January 2010, Claimant Stone withdrew his claims against Respondent Gordon.

In July 2010, Respondent filed a Motion for Sanctions for Claimant's failure to comply with the Panel's Discovery Order. Claimant Stone opposed the motion but the Panel granted and ordered Claimant  to pay $15,000 to Respondent, which was complied with by September 2010.

During the start of the September 2010 hearings, Claimant's withdrew with prejudice his claim of unsuitability. Respondents moved for sanctions against Claimant for the "eleventh hour" withdrawal of this claim, but the Panel denied the Motion.

The FINRA Arbitration Panel denied Claimant's claims in their entirety.

And so, at least from Claimant Stone's perspective, insult has been added to injury. In most cases, this is the end. In this case, it is merely the start of a long road of appeals.

For more, go to the Broke and Broker blog.