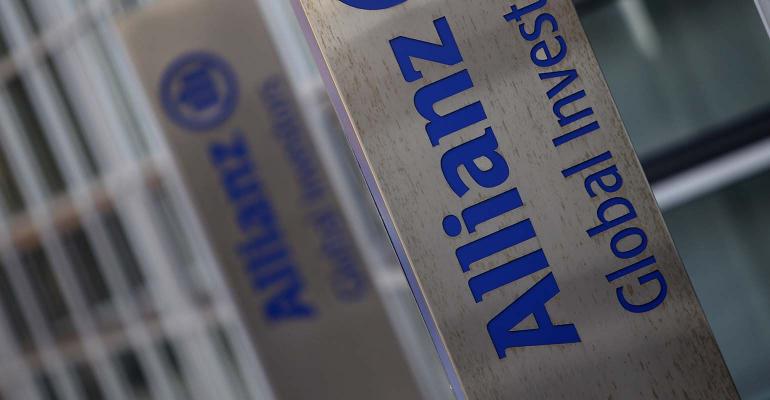 Alliance Global Investors will forfeit $463 million and pay $3.2 billion in restitution to victims of the fraud as well as a $2.3 billion penalty.

(Bloomberg) -- A unit of Allianz SE agreed to plead guilty to fraud in the implosion of a group of investment funds that lost $7 billion.

The agreement by Allianz Global Investors US, a New York investment adviser wholly owned by Allianz SE, came as Gregoire Tournant, a former executive with the firm, was charged in an alleged scheme to defraud investors. Manhattan U.S. Attorney Damian Williams in Manhattan announced the agreement and indictment Tuesday.

The agreement, under which AGI will plead guilty to a single count of securities fraud, calls for the firm to forfeit $463 million and pay $3.2 billion in restitution to victims of the fraud as well as a $2.3 billion penalty. It will get a credit for $1.9 billion that has already been paid to victims.

In addition, AGI will pay a civil penalty under an anticipated settlement with the U.S. Securities and Exchange Commission.

Tournant, the former chief investment officer and co-lead portfolio manager of the Structured Alpha Funds, and others overstated the level of independent oversight that AGI was providing, misrepresented hedging and other risk mitigation strategies and altered documents to hide the riskiness of the funds, according to prosecutors.

“As a result of this scheme to defraud, investors’ funds were exposed to higher risk than promised, and investors were deprived of information about the true risks to which their investments were exposed,” according to the Tournant’s indictment.

Allianz had set aside 5.6 billion euros ($5.9 billion) to resolve the lawsuits and government probes tied to the funds. The charges are a “fair estimate” of the exposure, the company said earlier this month. All charges announced Tuesday are covered by the provisions, an Allianz spokesman said.

AGI is due to make the forfeiture payment on Wednesday and will make the restitution payments within a week into an escrow account that will be distributed to victims.

“No one at AGI US or Allianz was verifying that Tournant and his colleagues were actually adhering to the investment strategies promised to investors,” according to Tournant’s indictment. “For example, no risk or compliance personnel at AGI US verified, attempted to verify, or were responsible for verifying that Tournant and his colleagues were purchasing hedging positions within the range that was represented to investors, or adhering to other agreed upon risk mitigation strategies, including those specifically promised to the funds’ largest investor.”

Tournant told investors that Allianz was “one of the largest and most conservative insurance companies in the world” and was monitoring every position that he took as a “master cop,” according to the court filing.

The Structured Alpha hedge funds were designed to provide protection against a market crash yet incurred steep hits during the tumultuous early days of the pandemic. Following a controversial options strategy, the Florida-based funds lost between 49% and 97% of their value during the first quarter of 2020. Investors said they lost billions of dollars. Allianz liquidated two of the vehicles in March 2020 and has been unwinding the others.

Pension funds and other investors suing AGI claim that was far worse than at  other funds hit hard by the start of the pandemic and say the firm breached its fiduciary duty by misleading them about how Structured Alpha was investing their money.

“In or about the summer of 2020, after the onset of the pandemic and in order to avoid detection of the fraudulent scheme, Gregoire Tournant, the defendant, obstructed an investigation by the U.S. Securities and Exchange Commission (the ‘SEC’) into the circumstances that led to the losses in March 2020. Among other things, Tournant repeatedly directed Stephen Bond-Nelson, a portfolio manager for the funds, to lie to the SEC.”

In late 2015, Tournant was frustrated with the cost of hedging, which was eating into returns, the U.S. said. The fund “abandoned the promised hedging strategy and instead began to purchase cheaper hedges that were further out of the money, and therefore less protective in the event of a market crash,” according to the indictment. That change was not disclosed to investors, prosecutors allege.