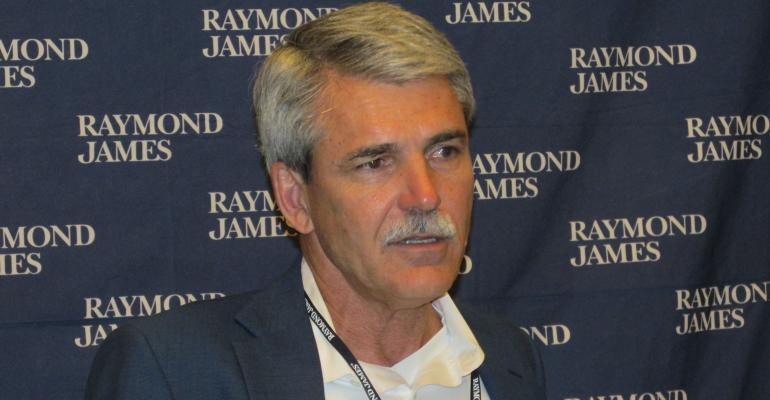 Two years after its acquisition of Morgan Keegan, Raymond James is focusing on organic growth, rather than acquisitions, said firm CEO Paul Reilly.

“Our focus is really organic growth, not acquisitions,” Reilly told reporters Tuesday during the firm's annual conference. “If someone fits the culture and they’re for sale, we’ll look at it, but otherwise our focus is growing organically.” Reilly added that while the firm is looking to do niche acquisitions in asset management, growing the firm’s advisory business will happen through recruitment and boosting advisor productivity.

“Recruiting is way up; it’s very active,” he said, noting that the firm doesn’t have a specific number of advisors they’re setting as a target. “We’d love to grow 5 percent, but that’s hard,” Reilly said, adding that people transition out of the business and retire.

Over the past 10 years, Raymond James advisor assets under management are up 2.5 times, according to Scott Curtis, president of Raymond James Financial Services, the firm's independent contractor arm. Advisor assets have steadily been on the rise, however, with independent reps currently managing $197 billion in client assets, up from $182 billion last year and $135 billion in 2010.

In terms of where these advisors are coming from, Reilly said Raymond James is looking at a number of options to boost diversity among its advisor ranks. With a women advisor program Reilly calls “second to none,” he said the firm is taking steps to develop women, with a particular focus on female sales assistants through a program aimed at transitioning to financial advisors.

Raymond James is also looking to bring in younger, diverse advisors through a fledgling program in its fifth year. With classes consisting of 35-40 participants, young recruits spend time training at the home office and out in the field. But it's a challenge because advisors are independent—no two firms are alike, Reilly said.

At this week's national conference, almost 50 potential recruits were checking out Raymond James, with several already committing to join, according to Curtis. A majority of the firm's recruits are employee advisors with large firms, with about a fourth who are already independent advisors looking to change firms. For those advisors, the move is usually prompted by dissatisfaction with the depth, and breadth of support with their current firm, or they feel the culture has changed, Curtis says.

This year, Curtis expects to have the best recruiting year the firm has had since fiscal year 2009, in which Raymond James Financial Services gained a net total of 129 advisors, according to the annual report. Curtis added RJFS is ahead of where it was last year in recruiting by 40 percent.

‘We’ll find great people and bring them over,” Reilly said. “If you’re recruiting just to fill up people who are leaving, it’s not a good game. Others have experienced that, but we’ve been lucky in that we haven’t so far.”