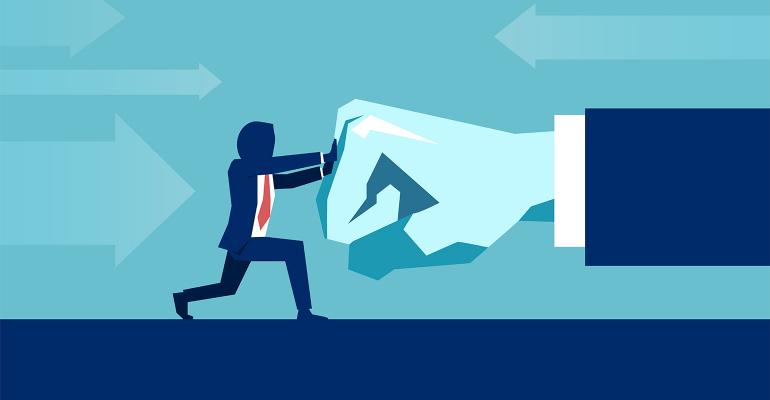 A Recipe for Dealing With Tough Prospects

Five steps to turn a frustrating interaction with a tough prospect into a game.

Have you ever found yourself flustered while trying to have a discussion with a tough prospect? I certainly have. It’s not very enjoyable, and if you’re not careful it can create a mental speed bump that could hinder your future prospecting efforts.

I’ve taken the liberty of adapting a recipe outlined by Dr. Karin Tamerius in her recent New York Times article: “Your Angry Uncle Wants to Talk About Politics. What Do You Do?” It was geared toward navigating tough political conversations during Thanksgiving gatherings.

However, her recipe, which consists of five simple steps, can also be successfully applied to dealing with tough prospects. Here’s how ...

Step 1: Ask—The secret is to start by asking a nonthreatening question. Your objective is to peel back the layers; get insight into their real issue, what they’re really thinking. Let’s take a look at the following scenario:

Tough Prospect: “You advisors are all the same, you sound the same, say the same things—and you’re all simply after my money.”

You Ask: “I’m curious, what has been your experience working with financial advisors?”

Obviously, there’s no way to predict how a tough prospect might respond, but your first step is to ask a simple question that is linked to their narrative.

Step 2: Listen—This should go without saying, but it’s been my experience that most people, including financial advisors, struggle with active listening. They might start off with a good nonthreatening question, but rather than carefully listen to their prospect’s response, they only partially pay attention because they assume they already know the answer and are focused on delivering their response—which they have been preparing rather than listening.

Tough Prospect: “I lost a ton of money when the market crashed in 2008 and my hot-shot advisor was clueless. I didn’t hear from him until weeks later—and it wasn’t a pleasant conversation.”

You Listen: “So what you’re telling me is that your advisor took credit when the market was going up, didn’t see the crash coming and wasn’t there when things went south.”

Essentially you’re paraphrasing what you just heard. This signals to your tough prospect not only that you are actively listening, but that you also understand what they are saying.

Step 3: Agree—This is not a blanket agreement, but rather the idea is to find something in your prospect’s response that you can agree upon. No matter how aggressive the response, there’s rarely a time when you can’t find something to agree on.

Tough Prospect: “You’re damn right! He was a big shot when the markets were going up, MIA when things went south—and I was paying this guy to lose money.”

You Agree: “Gosh, I don’t blame you for being mad at financial advisors.”

This is usually a concise and simple response, it’s your segue to Step 4. However, it’s important that your agreement is sincere. Your tough prospect has his BS radar on full alert and will instantly detect any disingenuous statements or blatant lies.

Step 4: Connect —Here is where you need to have a true personal story, something that confirms your tough prospects angst. Think of it in terms of an agree story.

You Connect: “What you just described is exactly what happened to my brother-in-law. His advisor was a big shot when the markets were going up and my brother-in-law was always bragging about the returns he was getting. Back then he was against having a family member as his advisor, but just like your situation, he wasn’t hearing from his advisor when everything went south, so he called me.”

At this stage, you’re reading your tough prospect. If he was listening to your agree story there’s a strong probability that he could relate. This is where you’ve begun to build a connection and gain control of the conversation. Which finally leads you to Step 5.

Step 5: Persuade—We refer to this as the mini-close. Now that you’ve connected, you’re simply making a suggestion for some form of a call to action. Such as …

You Persuade: “Can I make a suggestion? Why don’t you come to my office and let me walk you through exactly what I’ve done for my tough-nut brother-in-law—who, by the way, is now a client.”

As you well know, there’s no guarantee that your tough prospect is going to accept your offer to visit your office. But by applying these steps, you’ve turned a frustrating interaction with a tough prospect into a game. Once engaged in the game, you’ve begun to take control.

Mastering this recipe is an art in itself. Do this enough and not only will you be able to transform tough prospects into good clients, but you’ll also find yourself getting better at managing tough conversations—even if it’s with an angry uncle.