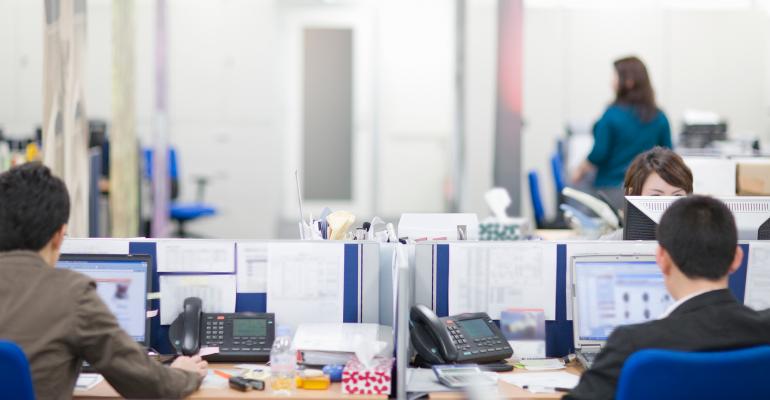 Heading Back to the Office? Ask for Air Filters, Not Bleach

“I don’t want to hear about your surface cleaning procedures, because that is a waste of time and money,” said Linsey Marr, a professor of civil and environmental engineering at Virginia Tech.

(Bloomberg)—As vaccinations speed up and companies look to reopen their offices, workers want something in return: confidence that it’s safe to be there, elbow to elbow with colleagues they’ve encountered only on screens for months.

Employers are touting measures to curtail the risk of infection with Covid-19, but not every action is equally effective, according to experts. Some of the most widely adopted steps may not help much at all.

More than a year into the pandemic, scientists are increasingly focusing on airborne transmission as the biggest culprit. For the office-bound, that raises the importance of better ventilation and air filtration, and undercuts the rationale for the ceaseless scrubbing of surfaces with disinfectants that many employers have adopted.

“I don’t want to hear about your surface cleaning procedures, because that is a waste of time and money,” said Linsey Marr, a professor of civil and environmental engineering at Virginia Tech who studies the interaction of viruses with the atmosphere. “But tell me about your ventilation. How often is the air changing out in the space? And tell me about your filtration.”

Related: Property Managers Say They are Prepared for the Return of Office Workers

While flexible working arrangements may outlast the pandemic, many people will soon be commuting again. In the U.K., where vaccinations are outpacing most of the world, employees last week returned to offices in numbers not seen since last March. JPMorgan Chase & Co. this week became the first major U.S. bank to mandate a return for its entire U.S. workforce, on a rotational basis, as soon as July.

After all these months, it may seem surprising that there’s still a debate over how the coronavirus spreads, and how best to stop it. That’s partly because of an overemphasis on the risk of so-called “fomite” transmission, which involves picking up the virus from a contaminated surface like a doorknob or elevator button, according to Marr and other scientists.

Earlier this month, the U.S. Centers for Disease Control and Prevention issued guidelines downplaying that threat. Each contact with a contaminated surface may have less than a one-in-10,000 chance of causing Covid-19, the agency said.

“There is little scientific support for routine use of disinfectants in community settings, whether indoor or outdoor,” the agency concluded.

For airborne transmission, the threat isn’t from large, virus-laden droplets that quickly fall to the ground, but from small particles that can linger in the air for hours, building up in poorly ventilated indoor spaces, while quickly dispersing outdoors.

Confusion over that has exacerbated the pandemic, creating policies that often punish people for meeting outside and increasing the likelihood of them gathering in homes and offices that are breeding grounds for Covid, according to Germany’s Association for Aerosol Research.

The group recently published an open letter to Chancellor Angela Merkel, saying politicians need to stop worrying about parks and beer gardens and focus on getting schools, nursing homes and workplaces to install air cleaners and filters.

Still, not all scientists are convinced that airborne transmission is the most important path, with some pointing to a lack of data. Yet others respond that hasn’t stopped public health officials from concluding in the past that diseases, including measles and tuberculosis, are primarily spread by particles in the air.

“The airborne route is likely to be dominant,” wrote a collection of experts, led by Trisha Greenhalgh, a professor of primary care health sciences at the University of Oxford, in a recent commentary in The Lancet.

One of the 10 reasons they cited to support that view was that many infections are touched off by people who have no symptoms. Because they aren’t coughing or sneezing, they primarily emit the virus while talking. And talking produces mostly tiny particles that spread by air, rather than projectiles that quickly fall to surfaces.

Ultimately, the risk of infection boils down to the intensity, duration and frequency of exposure to the virus, according to Joseph G. Allen, an associate professor at Harvard and director of the university’s healthy buildings program. He has worked with companies and groups on re-opening plans, from big finance and technology firms to Broadway theaters and prisons.

He sympathizes with organizations that have resorted to deep cleaning in recent months, despite the fact that he considers it “hygiene theater.” It’s highly visible, and reassuring to people returning after months away.

With the CDC’s pivot toward the threat of airborne transmission, the agency rolled out detailed guidelines on matters like ventilation and filtration. Employees worried about coming back to the office should ask employers whether they’re meeting those standards, which are tougher than most building codes, Allen said.

Another increasingly popular precaution is the installation of plastic dividers between desks in open-plan offices. For Allen, the plexiglass barriers are of questionable benefit in most cases, and could impede the air flow needed for proper ventilation. He cited an instance at a school office in Massachusetts where investigators, using a smoke test after a number of infections, found that the dividers had contributed to a buildup of coronavirus.

Over time, infections will diminish as more people get vaccinated, and concerns about catching Covid-19 at the office will probably recede, according to Marr. But the lessons learned in battling the virus could continue to reduce the incidence of colds and flu, she said.

As for elevators, one of the more worrying spaces in large buildings, Allen said they aren’t necessarily high-risk areas for infection. Lifts often have decent air flow, and people typically don’t ride in them for very long, nor very frequently. The bigger risk? Limiting the number of people in them, leading to crowds waiting in a building’s entryway.

“I recommend putting a sign in there that says, ‘Space as much as you can. Wear a mask. Don’t talk,’” Allen said. “People will probably appreciate that anyway.”