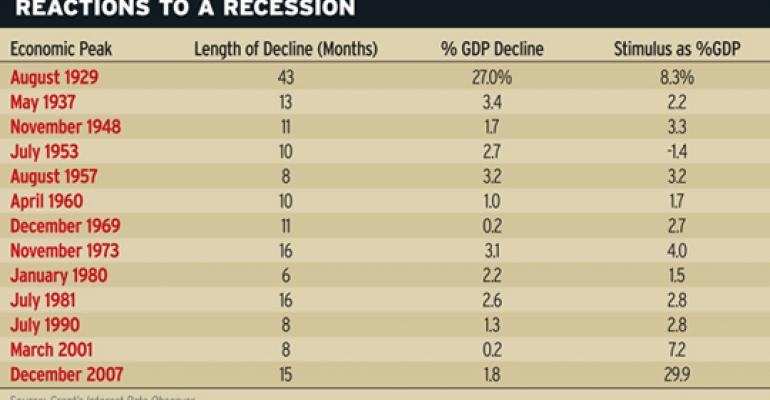 The government has spent 29.9 percent of GDP to get the economy growing again

The vast majority of economists still don't foresee a rerun of the Great Depression for the United States — but one might be forgiven for thinking otherwise given the amount of money the Obama administration is throwing at our contracting economy. Since the economy peaked 15 months ago in December 2007, U.S. GDP has declined 1.8 percent (through March 2009). In response, the government has spent 29.9 percent of GDP to get it growing again. By comparison, the 1929-1933 phase of the Great Depression lasted 43 months from the economic peak in August 1929 and saw GDP decline an extraordinary 27 percent — a decline 15 times greater than today's. The stimulus? 8.3 percent of GDP. This is according to James Grant, who published these figures in an April issue of his Grant's Interest Rate Observer. But there's more: With all the additional programs, guarantees and other back-stops, Grant expects another $8.9 trillion to be spent, or 63 percent of GDP — nearly 12 times the spending during the Great Depression.