Large PFs often painfully hit an excise tax speed bump while cruising blissfully on “PFs are tax-exempt” cruise control. While PFs are generally tax-exempt, a federal excise tax of 1 percent or 2 percent is imposed on earnings generated inside a PF. Smaller PFs may not even notice the insignificant scrape of the excise tax; however, large PFs, whose 1 percent or 2 percent tax represents a hefty chunk of change, can easily bottom out on the excise tax.

Drivers of larger PFs are often unaware that the excise tax can be reduced or even eliminated with an easy maneuver. Rather than realizing gains on the investments inside the PF, the PF should gift appreciated securities it owns directly to its favorite charities. These charities can then sell the securities donated by the PF and benefit from the proceeds excise tax–free. That is, rather than the PF selling its assets, realizing a (modestly taxable) gain and sending the cash proceeds to a favorite charity, the PF can swerve around the excise tax by simply gifting the underlying appreciated security directly to the charity. The charity then sells the security, receives the cash from the sales proceeds and doesn’t pay excise tax.

2. No Eating in the Car
Evgeniy Medvedev/iStock/Getty Images Plus

Clients will often use a PF to purchase a table at a charitable event, which they will then attend. However, by doing so, the donation is benefiting the PF’s founders or employees rather than being wholly dedicated to aiding the charity. IRS auditors are particularly sensitive to PF donors or employees enjoying a night on the town on the government’s tax-deductible tab.

The solution? Keep grease off the leather seats by having PF donors and employees either skip the dinners (perhaps to their delight) or personally pay for the dinners, and let the PF make an unrelated, wholly charitable donation to the charitable cause. Likewise, foundation fiduciaries can’t make political contributions or gifts resulting in a personal benefit.

DAFs, sportier cousins of PFs, often seem to compete with the brawnier PFs—but driving them in tandem may offer the smoothest charitable ride.

Not infrequently, a PF’s donation to a charity draws unwelcome attention when some group takes offense to the recipient charity, even years later. ABC’s George Stephanopoulos’ donation to the Clinton Foundation is an example of a donation backfiring. (He made the contribution while he was a journalist covering Hillary Clinton’s presidential campaign and the foundation’s controversies, without disclosure to the network or his viewers.) In the recent past, some business owners also have garnered unwelcome attention from activists for donations to certain organizations, and some individuals have been forced to resign in a storm of criticism surrounding political donations.

Because any potentially controversial charity can be a minefield, PFs should consider making gifts to a charity through the cleansing anonymity of a DAF. While PFs’ tax returns are posted online and viewable by the public, charitable donations made through a DAF are private. Therefore, the two-vehicle driver is often ideal—a PF in conjunction with a DAF. Clients can then (publicly) gift from the PF to a sister DAF and then request that the DAF (privately) donate to the potentially unpopular charity.

When your client or anybody else funds his PF with cash or publicly traded stock, the PF must send a letter acknowledging the gift and stating that no goods or services have been received by the donor. Failure to do this simple step cost one taxpayer more than $50 million in a lost tax deduction. This letter must be timely received by the donor.

Many clients who create a PF fear being deluged with requests from charities begging for assistance. Fortunately, blind solicitations are rare, probably because they’re expensive and often unsuccessful. Privacy can be maintained and unwelcome solicitations further minimized by using an advisor’s mailing address for annual income tax returns. Furthermore, if donors serve as trustees or directors of the PF, they should consider using the attorney’s office address, rather than a home address, for all public filings.

A PF is required annually to donate 5 percent of its assets. However, PFs should use the 5 percent requirement as a minimum and give away substantially more. This precludes the possibility of incurring the penalty for insufficient donations and provides the family with the fun of making either larger or more numerous contributions to favored charities. Remember—the PF’s goal is to improve the world and to keep younger generations of the family communicating—not to accumulate funds.

To avoid sticky situations, make sure that members of the board and the donor family periodically review and sign conflict-of-interest statements. The IRS is undeniably and rightfully sensitive to indirect benefits being obtained by board or donor family members.

Families build lasting bonds when working together, and a charitable endeavor is a particularly wonderful way for a family to foster closer relationships. PFs encourage meaningful multigenerational involvement and promote character development in the younger generation. Even a grade-schooler can advocate to the PF for charities she thinks are worthwhile. Family patriarchs and matriarchs can foster a philanthropic legacy by encouraging younger generations to consider which worthwhile causes should be supported and invite them to present their proposals at family meetings. Clients should consider holding PF meetings in a more formal environment, so younger family members appreciate the seriousness of the matter and learn how to present at a formal meeting. Also, they should encourage younger adult descendants to use PF assets to benefit their favorite charities. This will almost certainly motivate the next generation to want to drive the foundation even more.

You may have noticed that a PF is typically structured in one of two ways, either as a not-for-profit corporation or as a trust. Note that the corporate alternative typically requires three directors, while the trust alternative most commonly requires only one trustee. Parents may be wise to think twice about having their children empowered to outvote them as directors of a PF structured as a not-for-profit corporation. Astronaut Buzz Aldrin recently made headlines with a similar situation. Alternatively, the trust structure allows the parents, or a surviving parent, to run the PF without empowering their children to prematurely grab the wheel of the PF.

Be mindful if your client’s PF does any activity beyond simply writing checks. If the PF has staff, conducts site visits to charities or is otherwise active, one mistake can bring catastrophic liability to the PF. The PF should address this liability issue by acquiring a property-and-casualty-liability insurance policy that includes the PF’s fiduciaries as additional insureds.

Be mindful of financial advisors advocating for DAFs as a charitable panacea and alternative to your client’s PF. Note that all DAFs are legally owned by the money manager—not the family. Counterintuitively, larger DAFs can actually be more expensive to operate than PFs. The average DAF has about $300,000 in assets, while the average PF has millions of dollars in assets. Donors are surprised to learn that the institution sponsoring the DAF takes legal ownership of the assets gifted to the DAF; the donor’s role is merely that of an advisor to the fund. Financial advisors will argue that owning and operating a PF is burdensome or complicated. In truth, using a remote control on a satellite TV is probably more complicated for many. 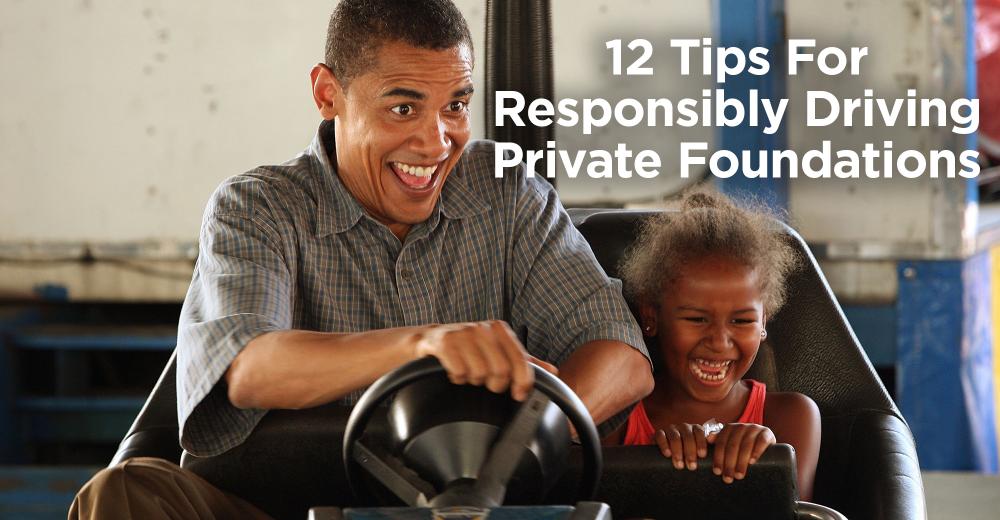