Evaluating a nonprofit to ensure there’s alignment with your client’s mission really depends on the type of funder your client is—or wants to be. Are they an innovator? Advocate? Change agent? Capacity builder? For example, let’s say a client wants to contribute to education. There are several ways to go about this, but they want to be sure the steps they take tie back to the defined role they want to play in fulfilling their philanthropic objectives. Do they want to advocate for education change on Capitol Hill? Or build schools in Africa? Those are two very different paths, so before they find the right nonprofit, it’s important to define their philanthropic personality.

2. Does the nonprofit have a clear mission that aligns with your client’s passions and values?
Craig Barritt/Getty Images Entertainment/Getty Images

Look for specificity. It should be focused, concise and clearly explain the entity’s unique set of skills for strategically solving problems. Ambiguous intent with statements such as “We’re dedicated to making the world a better place” often leads to vague, ineffectual work. What is the overriding purpose of the organization? Is it clearly focused on an issue or cause that matters to your client? When your client does receive a proposal, does the need addressed align with your client’s mission and objectives? It should be a clear fit—from the population they serve to their organizational strengths.

3. Does the nonprofit meet a critical need?
Jemal Countess/WireImage/Getty Images

In other words, does the nonprofit matter? Your client needs to determine that there’s a clear need for its services and whether there’s substantial data available to justify its mission and efforts. It’s important to understand what its target population is and what percentage of that population it serves. Then your client can examine whether these numbers have increased or decreased over time.

4. Does your client agree with its approach?
ALEXANDER NEMENOV/AFP/Getty Images

How is the nonprofit fulfilling its mission? A group of nonprofits with similar missions, say ending childhood hunger, may approach the same problem from different angles and perspectives. Be sure your client agrees with the organization’s strategy and tactics for addressing the issues they care about. Do they make sense? Are they based on credible research? Are they comfortable with them? For example, if the nonprofit frequently lobbies state and national legislatures, yet your client dislikes politics, it may not be the right fit for their donation.

To compare nonprofits with a similar focus, visit “watchdog” organizations like CharityWatch, Charity Navigator, Give, and GiveWell. These websites apply uniform standards to grade the financial and programmatic quality of nonprofits. They’ll also help your client beware of scams, fraudsters and fake charities trying to trick unwary, but well-intentioned donors.

For many people, impact-driven philanthropy is a top priority. Will your client achieve a bonafide positive impact by donating? Can the nonprofit prove its success? Does it report tangible evidence that it’s successfully meeting its goals? If results aren’t publicized, your client should consider it a red flag and instead donate to a nonprofit that tracks data and provides metrics of success. After all, your client has to trust the recipient to make their contribution count.

To take it a step further, choose a nonprofit that will partner with your client to measure impact. For example, a nonprofit could work with your client to provide serial funding with future gifts that are contingent on results. But don’t base success only on output. Instead, look at the outcome. For example, if your client’s goal is to help at-risk school children do better in class – and they want to gauge how effective a charity’s after school program is in achieving this – look beyond how many kids participate. That’s the program’s output, but what may really count is its outcome; how significantly the children’s performance in school improves.

6. Does it have a solid reputation and a credible board of directors?
Jemal Countess/WireImage/Getty Images

Check to see if the nonprofit has been in the news – and if that news has been positive. Does it have an upstanding reputation? Any allegations of bad conduct? Even if you suspect that the organization has been unfairly tarred by controversy, whether deserved or not, negative publicity can compromise success.

Additionally, look at the board of directors. Are its members chosen logically and thoughtfully, or are they seemingly chosen at random? Is the board dominated by the founder and a few insiders? Ideally, a mix of influential individuals and rainmakers should comprise the board along with experts relevant to the organization’s mission.

7. Is it transparent?
Dean R Specker/iStock/Getty Images Plus

Does it make its financial information readily available? If so, be sure its expenses are in line with its budget, and look at its 990-PF form to verify its tax-exempt status. It’s also a good idea to do a quick search to see if other reputable donors are funding the organization. If they’re hiding something, it’s in your client’s best interest to move on.

You don’t have to look far from home to find those who are in need. Nonprofits with local ties, particularly with communities that are marginalized, are often disproportionately impacted. This has been starkly illustrated by COVID-19, racial and social justice concerns and recent natural disasters that are having the greatest impact on communities of color, low-income communities, LGBTQIA+ people and people with disabilities. Also, try seeking out nonprofits taking the long-view approach as opposed to just focusing on the immediate aftermath of attacks, situations and extreme weather-related events.

One of the best ways to get to know a prospective nonprofit is to pay them a visit. Meet its leaders and consider volunteering for them. This is a great way to get to know the people, how they operate and the quality of the work. Site visits would also help your client build relationships–it’s a great first step to learn more about the nonprofit even before your client asks for a formal proposal or grant request. However, a site visit alone isn’t sufficient—what’s learned while there must be considered in the context of the other steps to ensure the right fit.

10. Is your client factoring in flexibility and responsiveness when it comes to giving?
Chip Somodevilla/Getty Images News/Getty Images

It’s not always what your client gives–it’s also how and when they give that matters, so that nonprofits can use the funding in the way that is most important at that moment. For instance, nonprofits everywhere have been impacted by changes in funding due to the acute and unpredictable needs that emerged in 2020, as well as supply chain issues and a reduction in government support. To help them keep the lights on, consider giving to general operational purposes rather than specifying how the funds should be used. 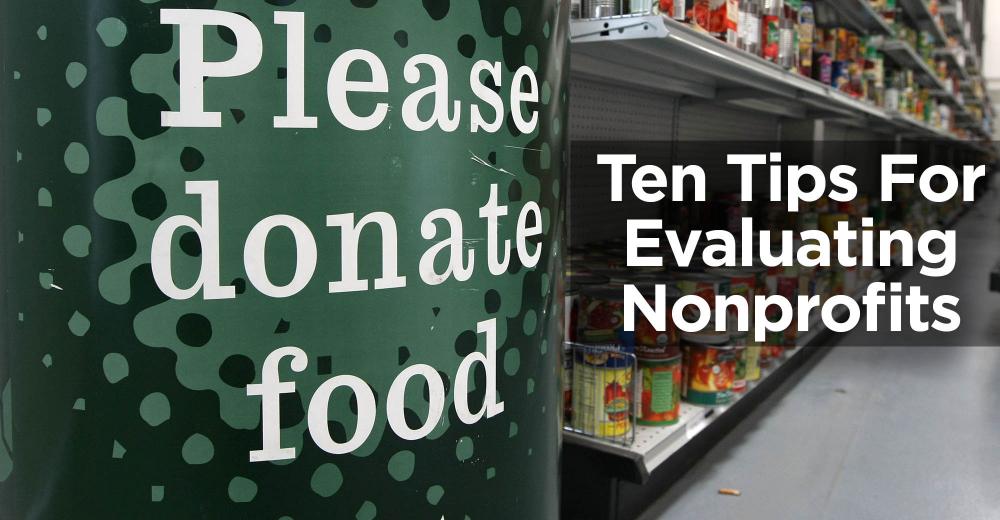