Although religious giving may be declining as a percentage of overall giving, donations to most houses of worship and other faith-based organizations are holding steady -- and probably increasing.

Because the most significant predictors of philanthropic giving are education, income and wealth, and because women today have increased access to all three, the data shows that women are more likely to give than men. In addition, they’re likely to make larger donations than men.

Statistics show that immigrant households are in fact less likely than native households to receive assistance from governmental and nongovernmental sources. Immigrant status has no significant effect on charitable giving.

African Americans have contributed to charity for hundreds of years. In fact, African Americans contribute the highest proportion of their wealth to charity. The only “new and emerging” phenomenon, note the authors, is the growing interest of mainstream non-profit organizations in donors of color.

Particularly in cases of dire humanitarian need and disaster relief, aggregated amounts of small gifts are the lifeblood of philanthropic campaigns. Even in other situations, small gifts can help donors get to know an organization, inspiring larger donations in the future. One plus one can eventually lead to a million.

Although some giant university endowments (such as Harvard University’s $39 billion) have come under well-deserved scrutiny, the situation is different for most nonprofits. Endowments provide long-term stability for funding programs and operations, especially in periods of financial volatility and uncertainty.

Research shows that people give for many good reasons, including enhancing their own self-interest. My own experience confirms this. Although donors are certainly drawn to causes they care about, many other factors often influence the extent of their generosity and engagement.

Among the most pervasive myths is the belief that -- to be a philanthropist -- you have to be a multi-millionaire or even a billionaire. This myth is perpetuated by media coverage of mega-gifts to universities, hospitals, the arts and other worthy causes by a small number of uber-wealthy people.

Another common fiction about philanthropy is that high administrative costs reflect a charitable organization that is poorly run. This myth holds that the less a non-profit organization spends on administrative overhead, the more effectively it will achieve its mission. Some donors apply a test that consists of the ratio of administrative costs to overall program outlay. Unfortunately, adherence to the overhead myth creates a “starvation cycle” that undermines the actual capacity of nonprofits to achieve their missions and fails to take into consideration the actual costs of administering challenging programs that address truly challenging problems.

10. Executives should get low pay
Gary Gershoff/WireImage/Getty Images Plus

.  A corollary myth is that the executives of nonprofits shouldn’t be paid as much as the executives of for-profits. As a result, nonprofit leaders are routinely underpaid. To tackle today's difficult problems, we need the most talented leaders. Improved non-profit compensation will eliminate the conundrum faced by many qualified candidates: “Should I choose a job in which I can do well or a job in which I can do good? 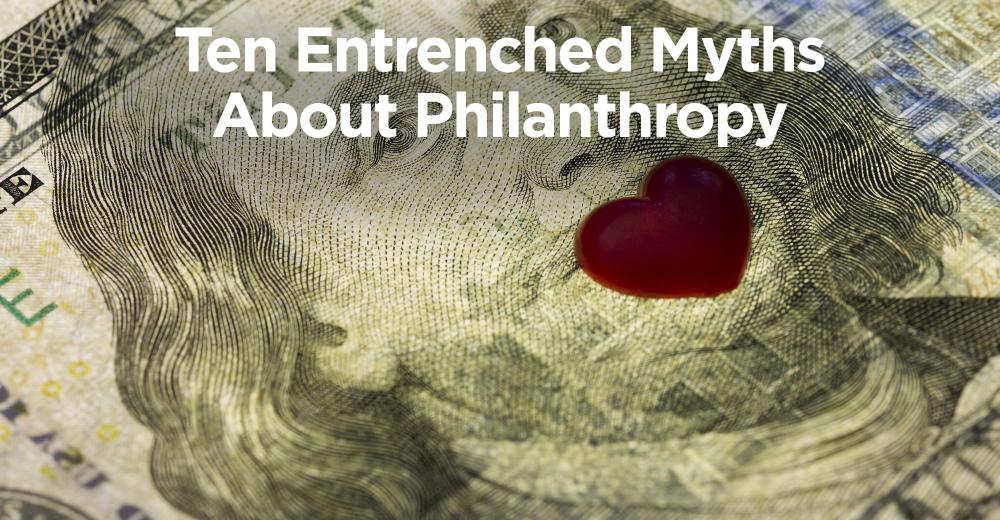 Next Up
The Top U.S. Cities for Giving
Start Slideshow ›