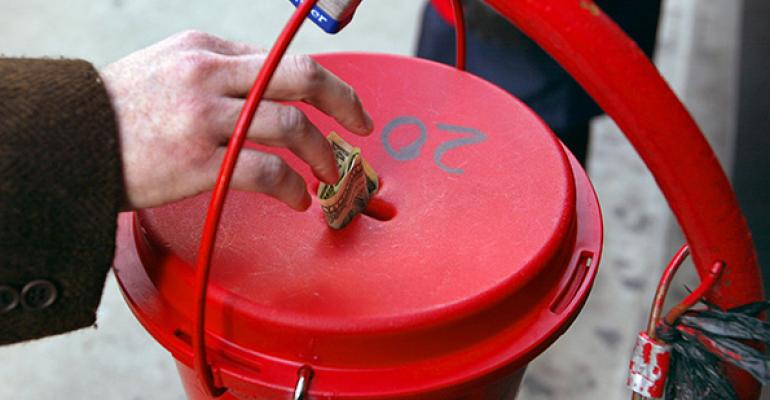 The Super-Rich Are Stockpiling Wealth in Black-Box Charities

DAFs provide tax benefits and a bigger pool of money to donate, but critics worry the funds can create "warehouses of wealth."

(Bloomberg) --It’s all the rage in charitable giving -- and it’s actually got some charities worried.

Donor-advised funds — money that grows tax-free in individual accounts — are reshaping the landscape of U.S. philanthropy. After creating their account, donors choose how it’s invested, and the money compounds until they decide where to dole it out. DAF assets mushroomed to more than $85 billion at the end of 2016 from $30 billion in 2010.

Not everyone thinks that’s good news. Critics say the approach may slow the flow of money directly into nonprofits that serve the needy on a daily basis. Moreover, it injects charitable affiliates created by for-profit financial players such as Fidelity Investments and Charles Schwab deep into the big business of philanthropy -- a boon for them and their clients, but, some worry, not so clear a win for the causes. 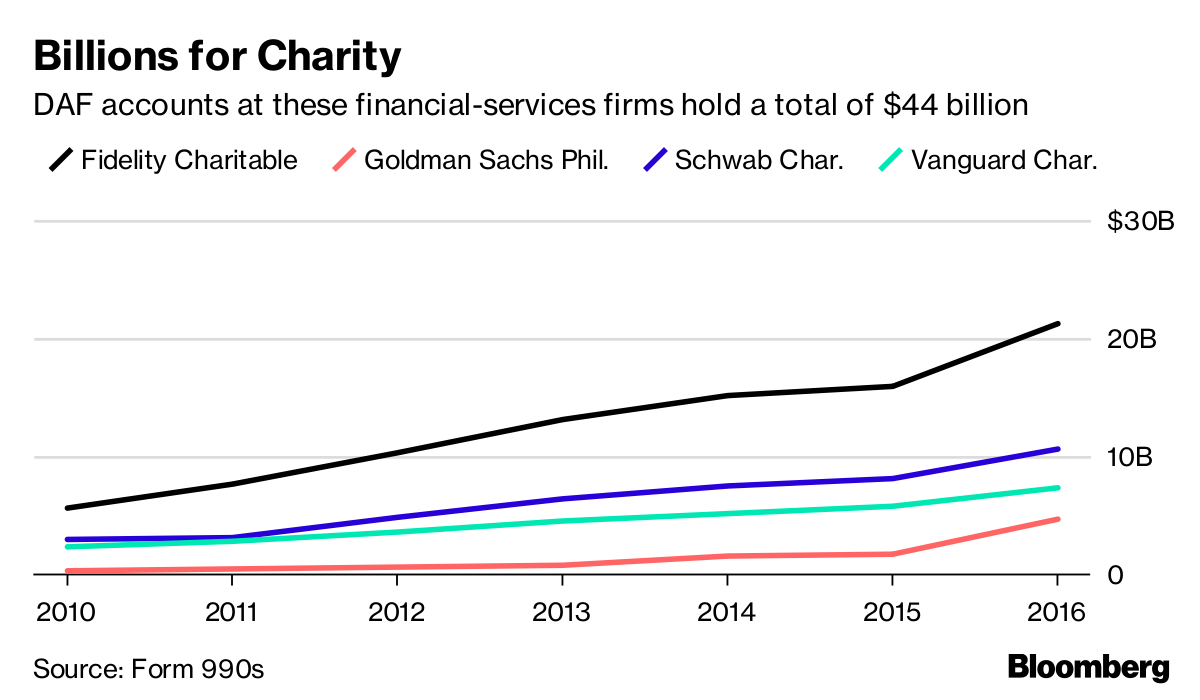 The Salvation Army is grateful for DAF contributions, said Jeff Hesseltine, director of gift planning for the not-for-profit’s western territory. But “the best option is for donors to work directly with a Salvation Army fundraiser who can assess their charitable intent, decide on a giving strategy” and have gifts put to good use immediately.

The financial-service industry’s interest in giving is tied to a looming generational wealth transfer -- and a desire not to see assets walk out the door. (A common DAF marketing theme is the ability to leave a legacy of giving for heirs.)

The money in many of these accounts started out as highly appreciated, publicly traded stock and illiquid “complex assets” such as shares in closely held businesses, restricted stock, oil and gas royalties, and real estate interests. Then there’s the art, the cruise ship, the Bitcoin and bushels of wheat and soybeans DAFs have liquidated to fund accounts.

If the donor sold them, those assets could produce huge tax bills. If they’re donated to a DAF, they bring huge tax benefits and a bigger pool of charitable funds than if they’d been sold and the proceeds donated.

This tax-powered alchemy has been called “philanthropic fracking” — a way to tease out more dollars from rich people’s portfolios. Fidelity Charitable took in $1 billion last year in complex assets and will probably get another billion this year, said President Pam Norley. At Vanguard Charitable, more than 80 percent of 2017 contributions came from non-cash assets including securities, restricted stock and real estate.

DAFs offer advantages over private foundations. Donors who contribute privately held stock or real estate to their foundation must value it at cost basis -- likely to be low for depreciated property or businesses started in a garage. The income-tax deduction is capped at 20 percent of adjusted gross income (AGI), which can be carried forward five years.

If instead that asset is contributed to a DAF, an appraiser determines its fair market value before it’s donated. That yields a bigger deduction, which can offset as much as 30 percent of AGI (and can also be carried forward five years). Since the DAF is a public charity, the donor pays no capital gains tax -- and neither does the DAF when it sells the asset.

The wealthier one is, the more illiquid and highly appreciated assets one probably owns, enhancing the appeal of these accounts.

“One reason for the extraordinary growth of DAFs is their ability to provide maximum tax benefits for complex assets: property other than publicly traded stock,” said Ray Madoff, a Boston College Law School professor and founder of its Forum on Philanthropy and the Public Good.

DAF have another advantage: Even though donors yield legal control of assets they contribute, their financial advisers may be allowed to direct how the money is invested and earn management fees. The biggest accounts also may be allowed to invest outside a DAF sponsor’s usual menu of options.

DAFs have advantages for financial-services companies, too. Some 60 percent of the $21.2 billion in Fidelity Charitable, for example, is in Fidelity funds. Fidelity Investments parent FMR LLC is the DAF’s largest independent contractor and received $46.3 million for the year ended June 30, 2017.

“Given the potential for philanthropic dollars to grow through investment in a DAF, the work we are doing creates a net positive in funds made available,” she wrote in an email. 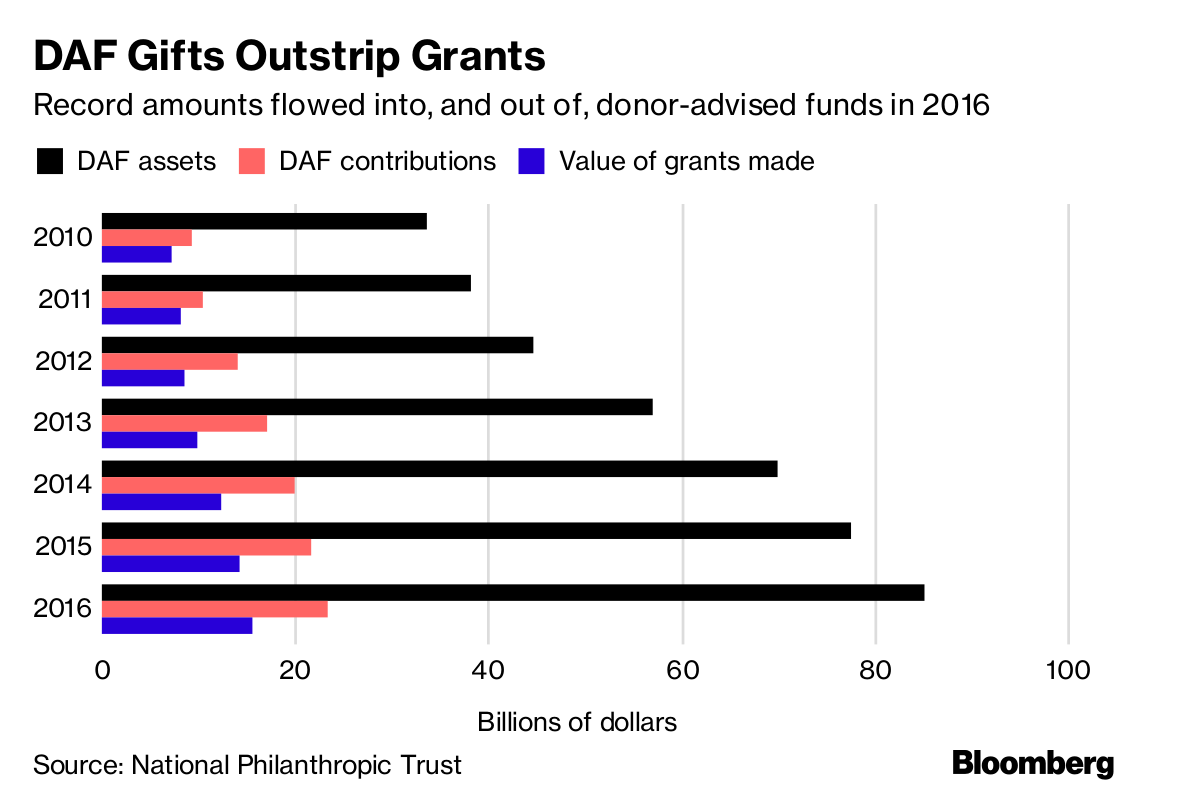 Some have criticized DAFs because the money they accumulate far outstrips funds flowing in, prompting a recent report to label them “warehouses of wealth.” Private foundations must pay out at least 5 percent of assets annually, but DAFs don’t have a legal requirement for minimum payouts, and the big providers cite annual aggregate grantmaking of about 20 percent.

Payouts are “the big public policy question,” said Roger Colinvaux, a professor at Catholic University of America’s Columbus School of Law. “DAFs are set up to treat money like it’s still the donor’s money. It’s like having your own mutual fund at Fidelity: You get statements and watch it grow. You feel like if you spend it, you lose it.”

If the pace of grantmaking doesn’t increase, DAFs risk regulation, said Bryan de Lottinville, founder of Benevity, a corporate giving platform that partners with DAFs. “There’s this big corpus growing to no real benefit of anyone other than the people earning fees for managing it.”

Now, a donor contributing an asset appraised at $1 million gets an immediate $1 million write-off. When a DAF sells the asset, it may fetch $900,000 and after carrying costs and fees, leave $800,000 for the DAF.

Even with the money in DAFs exploding, total charitable donations remain around 2 percent of disposable income, so it may be too early to judge whether they provide a societal benefit equal to the donors’ tax breaks. What is clear: The business of supporting charitable giving has never been so profitable.