People in the United States are finally recognizing the dangers of climate change. New reports showing the alarming rise in Earth’s temperature are attracting the attention of a wide range of philanthropists. Recently, 29 donors announced a $4 billion pledge to combat climate change—the largest-ever philanthropic investment focused on this issue.

Foundations of all sizes are taking on the issue of ecocide (the destruction of the natural environment due to human activity). These include the Hewlett Foundation, the ClimateWorks Foundation and the Biodiversity Funders Group. Nonprofit organizations addressing the issue include Carbon War Room, Drawdown, 350.org. and Global Footprint Network. Expect these initiatives to multiply.

During the Great Recession, giving in the United States plunged 7 percent in 2008 and 6.2 percent in 2009—resulting in billions less for charity. At the same time, the needs of people dependent on the “safety net” became even more urgent, placing growing demands on hard-pressed nonprofits. Unless the current economy stabilizes, expect a recurrence of this perfect storm of decreased giving and increased need—which will create huge challenges for nonprofits and those who rely on them.

In 2017 and 2018, there was a surge in politically motivated giving across the political spectrum. Huge numbers of people contributed time and money to advocacy and policy organizations.

As long as President Trump remains a polarizing figure, both supporters and detractors will recognize the role played by nonprofits in important issues, such as constitutional rights, civil liberties, freedom of the press, environmental protection, immigration, gun safety, health care, veterans’ issues and more. In 2019, expect Americans to continue to use philanthropy as a vital form of civic engagement.

4. Impact of Tax Law Changes Must Be Closely Watched

The federal income tax law that took effect in 2018 doubled the standardized deduction—$12,000 for single filers and $24,000 for those filing jointly. It was predicted that this change could reduce the percentage of taxpayers who itemize deductions from 30 percent to only the wealthiest 5 percent.

Additionally, the increased estate-tax exemption eliminated any tax incentive for all but the wealthiest 1,800 or so Americans to make donations at death. These two changes are expected to reduce giving by many billions. Soon, the data will start coming in. Economists and the nonprofit sector will be watching closely.

In the past decade, giving circles have tripled in number. In a giving circle, individuals pool their money and decide collectively how it will be donated. There are an estimated 1,600 such groups in the United States—most of which are composed entirely of women.

The Collective Giving Research Group found that giving circles have donated nearly $1.3 billion and engaged more than 150,000 donors. Four out of five giving circles focus their efforts on local causes—highlighting human services, the welfare of women, and girls and education. Look for continued growth in 2019.

The US SIF Foundation recently announced that assets invested with a sustainable, responsible and impact-investing lens now account for one-fourth of the $46.6 trillion in total assets under professional management in the United States. This is a 38 percent increase since 2016.

An amount of $1 trillion currently sits in foundations and donor-advised funds. Increasingly, donors are asking, “Where is our money spending the night?” They’re choosing to invest those assets for the double bottom line of both financial return and social impact. In 2019, we can expect that more donors will work to achieve their missions from the engine of their philanthropic assets, not just the fumes.

The use of  the 2015 United Nations Sustainable Development Goals as a philanthropic road map will continue to increase as domestic philanthropists recognize the important role the goals can play in focusing all of us on the achievement of the globally shared objectives of a better and more sustainable future for all.

More than ever, leaders in families, foundations and businesses recognize that philanthropy is more than the transactional act of writing checks or clicking online donation buttons. It’s also much more than a simple tax write-off. In 2019,  philanthropy increasingly will be seen as a strategic and intentional investment that can be transformational—for both society and the donor. 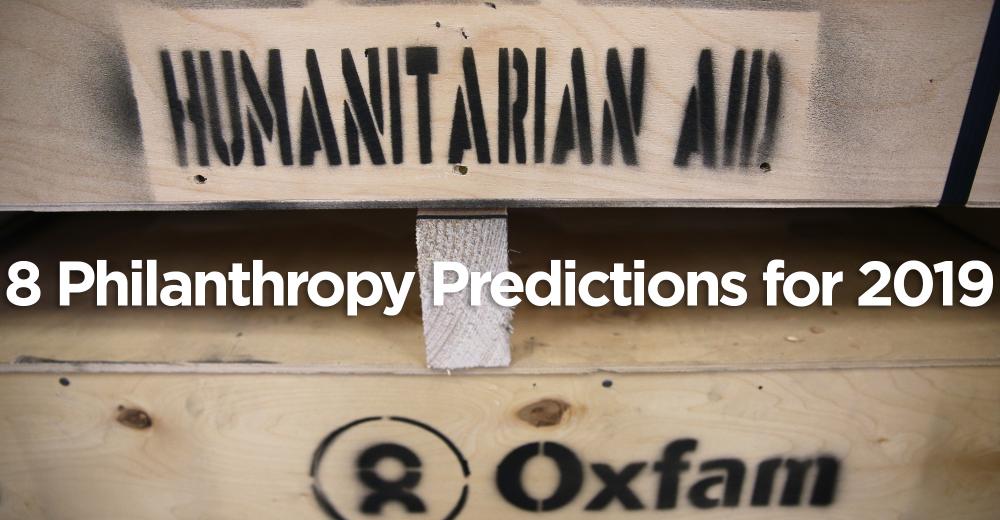