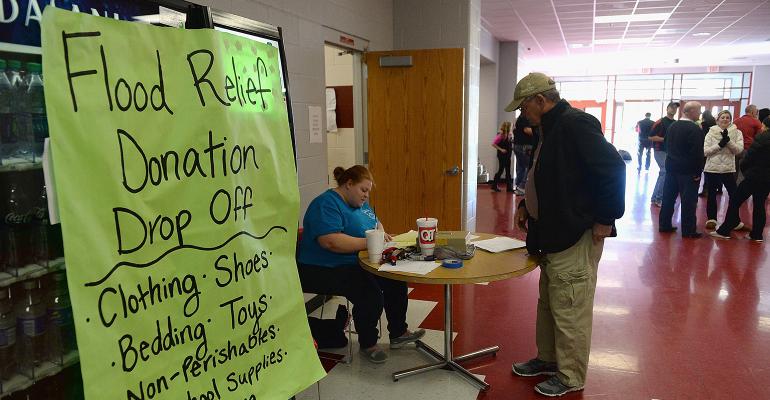 Ensure your client’s generous response does the most good.

“Man-made disasters” such as shootings at schools, concerts, houses of worship and workplaces are also occurring at alarming rates.

All of these events result in loss of life as well as damage to property. Thanks to almost-instantaneous global news coverage, we learn of these disasters and see video of suffering victims in real time. Many of our clients are moved to respond with philanthropy.

In 2017 and 2018, about 30% of U.S. households made a disaster-related donation, motivated primarily by the magnitude of the disaster, media coverage and a personal connection to the event, according to the U.S. Household Disaster Giving in 2017 and 2018 Report.

The report also says that a third of disaster giving is done within the first four weeks after an event and close to two-thirds in the first two months. After five or six months, nearly all giving stops. In 2017, just 2% of disaster-response donors continued to give toward disasters that occurred in previous years. In 2018, just 5% continued to give.

Because disaster-related philanthropy is often an emotional response to a terrifying event, it’s rarely strategic and, as a result, often not effective. Mistakes are common. Here are some tips to give to your clients to make sure their  generous responses do the most good.

Give Cash, Not Items

First responders need money to pay for the goods and services that are needed immediately as well as for long-term recovery efforts. Many well-intentioned donors send goods such as clothing, dolls and food. In response to the Sandy Hook shootings, for example, donors sent 60,000 teddy bears and more bicycles than there are children in Newtown, Conn. A tsunami in tropical Thailand resulted in donations of useless winter clothing.

Many of these items sit in warehouses or encumber ports, preventing more critical relief from getting quickly to those who need it. Volunteering at the site of a disaster can create similar problems and lead to crowding, interference and inefficiency. Cash avoids these problems.

Give to Established Organizations With Local Resources

After disasters, new organizations appear, create websites and attempt to capitalize on the catastrophe. Some of these sites are entirely fraudulent, and it can be extremely difficult, especially from a distance, to distinguish between real and fake groups.

As with all philanthropy, your clients should never give in response to telephone or door-to-door solicitations. Clients should do their research. The Center for Disaster Philanthropy, National Voluntary Organizations Active in Disasters and InterAction post lists of organizations working in affected communities.

The Center for Disaster Philanthropy routinely establishes Recovery Funds that collect donations for specific natural disasters and allocates the money for longer-term recovery needs. In addition, community foundations in the impacted areas usually provide guidance on the most appropriate local nonprofit organizations.

Invest in Mid- and Long-Term Recovery

The attention span for disaster response is very short, even though the recovery effort can continue for many years. One year after Hurricane Maria devastated Puerto Rico, for example, 60,000 occupied homes remained roofless, the power grid was unstable, mental health problems were epidemic, numerous businesses remained closed and many young people had fled the island.

Mass shootings result in serious mental health challenges over the long term for all affected.

Benjamin Franklin’s “an ounce of prevention is worth a pound of cure” axiom can be applied to your client’s disaster giving. Many nonprofits have programs directed to disaster preparedness. Others create and distribute homes, food supplies, power generators and other items that help communities prepare for disaster. Build Change, for example, works to reduce deaths, injuries and economic losses caused by housing and school collapses resulting from disasters.

As with any giving, cultural differences between donors and recipients must be recognized to ensure that philanthropy is not only culturally sensitive and appropriate but also effective in an intended location.

As natural and man-made disasters increase, disaster philanthropy will become even more important—especially as government resources are restrained. Strategic and thoughtful disaster philanthropy that maximizes both short- and long-term recovery can be a critical component of both individual and corporate giving.