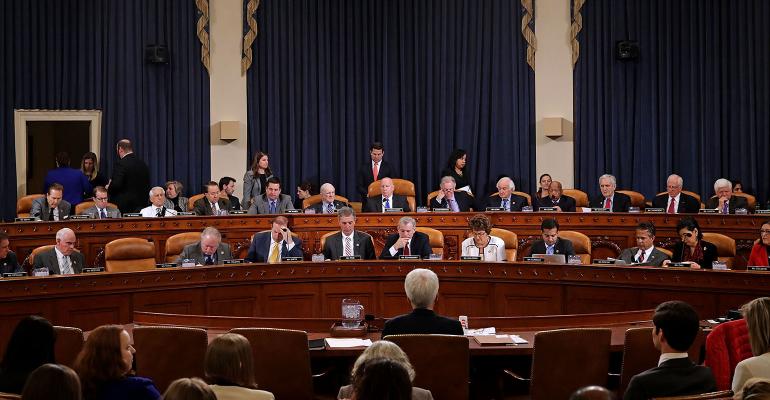 Behind the Tax Reform Curtain

A peek for donors and foundation leaders.

For months, tax policy aides in the House of Representatives have been working behind the scenes compiling option memos in gargantuan briefing books for lawmakers to consider once their full attention is turned to tax reform.

Well, the House just passed their health care reform bill and members are now pivoting to those briefing books. Just in time. This week, the House Ways and Means Committee is holding its first tax reform hearing of the new Congress, showcasing this Republican campaign promise as an engine for economic growth. We fully expect this first salvo to be followed by other hearings diving deeper into the details of tax reform. Those option memos are suddenly becoming very relevant as members begin discussing, in earnest, which tax laws to keep, modify or scrap.

So what tax law changes (or eliminations!) are lawmakers focusing on that impact charitable donors and foundation leaders?

Here’s what we know. Beyond lowering tax rates on earned income, Congress is seriously considering two other changes — affecting the charitable deduction and endowments — that would impact donors and foundation leaders. Both raise revenue.

1. $95 billion a year of charitable giving at risk. The House’s current tax reform plan, known as the House Blueprint, calls for a substantial increase in the standard deduction. This goes a long way toward simplifying tax preparation for millions of Americans. However, it also nullifies the charitable deduction for many millions more. According to the House blueprint, only 5 percent of Americans would be left itemizing and that means only 5 percent of Americans could take the charitable deduction, down from 33 percent today.

What’s the impact? Well, if 82 percent of individual giving — or $239 billion per year — is provided by itemizers and you shrink that pool of itemizers down to 5 percent of taxpayers, you intuitively get less giving. How much? About $95 billion a year of charitable giving is at risk.

But never fear, policy wonks are to the rescue! Many in the charitable policy community are rallying behind a newly-birthed alternative to the charitable deduction.  The idea would be to scrap the current deduction and offer a charitable deduction to ALL Americans, regardless of whether they take the standard deduction or itemize, maybe calling it the “All-American Charitable Deduction or Universal Charitable Deduction.” This idea manifests the principle that if you make a donation, that donation ought not to be taxable because it’s not income to you. You gave it away, hence you get a deduction.

Whether this idea makes the cut will, in part, depend on how much revenue it will cost. Congress’ Joint Committee on Taxation “scores” (or estimates) every piece of tax legislation is “scored for its effect on tax revenue. Unless Congress wants to add to the deficit, most assume tax reform will be about revenue neutral. This means that if your idea would cost revenue — that is, loses tax revenue relative to current law — it’s less attractive. Several teams are assessing the score on this All-American Charitable Deduction to determine how appealing it will be for an options memo.

Members of Congress have openly groused about the explosive growth of university endowments and tuition, while students, and their parents who vote, build up mountains of debt. In fact, in 2014, under then-Chairman Dave Camp (R-MI), the Ways and Means Committee drafted a tax reform bill, H.R. 1, that called for a 1 percent excise tax on the investment earnings of private universities if their endowments are greater than $100,000 per student. Here’s an example: XYZ University has 20,000 students and an endowment of $4 billion. An excise tax would be due because its endowment is more than $2 billion (20,000 x $100,000). Ouch.

While it’s unclear how much of H.R. 1 will make its way into eventual tax reform, university endowments are still very much on the minds of lawmakers.

So what does this have to do with PFs? The federal budget is shrinking, putting stress and pressure on state and local governments to do more with less, much less. Members of Congress may decide that PF endowments, already earmarked for charity, may be too tantalizing of a target to ignore. We understand these endowments are different animals from university endowments, but those details may be overlooked in the horse-trading that occurs in tax reform negotiations.

Tax reform will require hard decisions and hard votes. Bottom line is that you ought not to put off getting informed and being prepared.