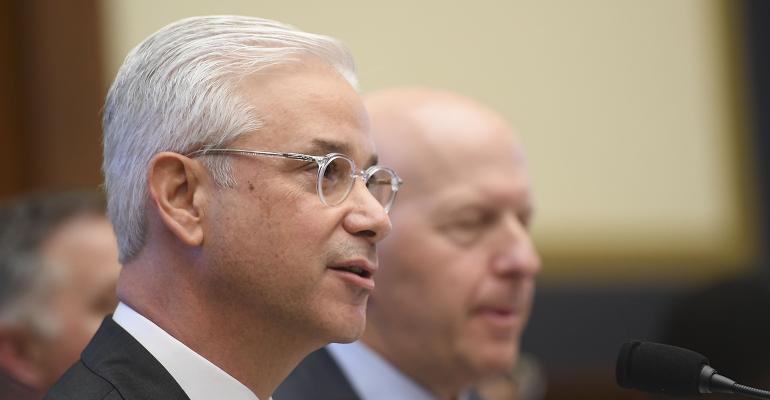 Wells Fargo & Co. named Charles Scharf chief executive officer, marking a new era in the bank’s efforts to turn itself around after a series of scandals claimed two previous CEOs in the past three years.

Scharf, the CEO of Bank of New York Mellon Corp., will take over on Oct. 21, replacing interim chief Allen Parker, the San Francisco-based bank said Friday in a statement. Shares of the company rose 2.3% in early trading in New York.

“With more than 24 years in leadership roles in the banking and payments industries, including as CEO of Visa Inc. and Bank of New York Mellon, Charlie has demonstrated a strong track record,” Wells Fargo Chair Betsy Duke said in the statement.

Scharf, 54, will be charged with mending ties in Washington, where Wells Fargo’s problems are hardly over: The bank still faces several investigations and outstanding consent orders, including a growth restriction imposed by the Federal Reserve.

He’s also inheriting problems in some of the company’s core businesses. Revenue dropped in four of the past six quarters, and loan balances have been falling over the past two years. JPMorgan Chase & Co. has pulled ahead of Wells Fargo in consumer banking, generating about $2 billion more from the business. Two years ago, Wells Fargo was ahead by almost $1 billion.

“I have deep respect for all the work that has taken place to transform Wells Fargo,” Scharf, a longtime protege of JPMorgan CEO Jamie Dimon, said in the statement. “I am committed to fully engaging with all of our stakeholders including regulators, customers, elected officials, investors and communities.”

Wells Fargo has brought in several JPMorgan veterans, including Chief Risk Officer Amanda Norton, as it turned over its top ranks in the last three years.

Scharf joined Visa as its CEO in November of 2012 after a decade at JPMorgan, where he led retail banking before taking over an investment arm. He oversaw Visa during a time when the industry’s profits snowballed as consumers around the world increasingly turned to electronic payments.

But Scharf resigned from Visa in 2016 to be closer to his family on the East Coast. He’ll run Wells Fargo from New York, according to the statement.

At Bank of New York, he struggled to turn the trust and custody bank around, as shares are still below where they were when he took over more than two years ago.

Wells Fargo’s board of directors conducted a months-long search for someone outside the bank to fill the top slot after Tim Sloan abruptly stepped down in March, bowing to pressure from regulators, politicians and investors. Parker, the bank’s general counsel who joined in 2017, has been running the bank since then.

Scandal erupted at the company in 2016, with the revelation that employees had opened millions of potentially fake accounts to meet sales goals. The ensuing fallout claimed then-CEO John Stumpf, and the board chose Sloan, a three-decade Wells Fargo veteran and Stumpf’s heir apparent, to take the top job.

Problems emerged in more business lines during Sloan’s time at the top, prompting additional scrutiny and calls for his ouster from lawmakers including Massachusetts Democrat Elizabeth Warren. The rebukes from politicians and regulators got louder, culminating in a congressional hearing and a pair of public criticisms from the Office of the Comptroller of the Currency and the Federal Reserve in March. Sloan announced his retirement days later.

As part of the fix, Wells Fargo has been focusing on cutting expenses, which have been pushed higher by legal costs, remediation and fines. The company still employs more people than any other U.S. bank, and its revenue per employee has trailed most major competitors in recent years. Sloan had said he planned to cut headcount -- currently at 262,800 -- by as much as 10% over three years, but Scharf may decide on a different route.

Parker will continue at Wells Fargo as the company’s general counsel, according to the statement.

— With assistance by Jennifer Surane, and Michelle Davis