/sites/all/themes/penton_subtheme_wealthmanagement/images/logos/footer.png
Recent
Recent
Seven Tips to Help Financial Advisor Firms Protect Their Customer Lists
May 20, 2022
Nine Must Reads for the CRE Industry Today (May 20, 2022)
May 19, 2022
Dondero’s NexPoint Targets More Than $1 Billion for New Wager on Single-Family Rentals
May 19, 2022
SEC Judges’ Constitutional Cloud Darkens After Appeal Ruling
May 19, 2022
Featured
The 10 Best and 10 Worst States in Which to Retire in 2021
Jul 15, 2021
Poll: 15 Classic Books on Investing and the Markets
Apr 03, 2020
Fifteen Must-Listen Business Podcasts for Advisors
Aug 14, 2020
Celebrity Estates: Jay Leno and Planning for Classic Car Collections
Feb 22, 2022
Ten to Watch
brought to you by 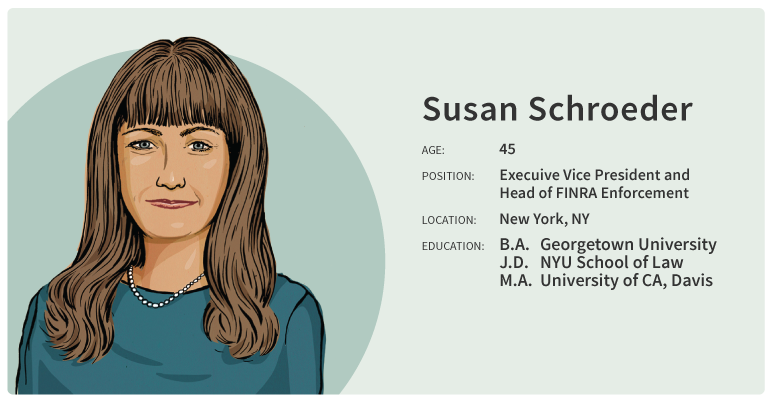 The Financial Industry Regulatory Authority (FINRA) named a new head of enforcement this summer: a motorcycle-riding insider who is tasked with overseeing structural change in the disciplinary arm of the authority.

Susan Schroeder, who has been with FINRA since 2011, was promoted to executive vice president and head of enforcement in July. She will report directly to CEO Robert Cook.

Traditionally, FINRA enforcement was divided between those who handled disciplinary actions related to trading-based matters, found through market surveillance and examination programs, and the other handling cases referred from other divisions in the organization, including Member Regulation, Corporate Financing, the Office of Fraud Detection and Market Intelligence and Advertising Regulation. Schroeder will bring those two groups together.

“We’re very much at the beginning of the process,” Schroeder said about the consolidation, intended to increase enforcement’s speed and efficiency. She
is currently evaluating each team and said it’s too early to put a timeline on when the fusion of the two teams will be complete or what it will mean in terms of staffing.

The changes are part of FINRA360, the agency’s broad and ongoing self-evaluation and improvement initiative launched early this year. Since NASD and NYSE Regulation merged to form FINRA 10 years ago, member firms and markets have changed significantly.

On enforcement itself, Schroeder said the division internally tends to prioritize its efforts based on the risk that any situation poses, allowing them to best serve investors with “admittedly limited resources.”

Schroeder, who rides a 1947 Indian Scout, said no single issue keeps her up at night, but it’s troubling that longtime issues, such as fraud, “don’t seem to go away over time.”

Nor is she troubled that so far this year, according to published reports, FINRA has levied $17 million in fines, down 77 percent from the first half of 2016. “The numbers, they are what they are,” she said, adding that the dollar amount of fines assessed is not an effective way to measure success, compared with identifying and disciplining bad actors. In other words, she pointed out, the numbers flow from the conduct, not the other way around.