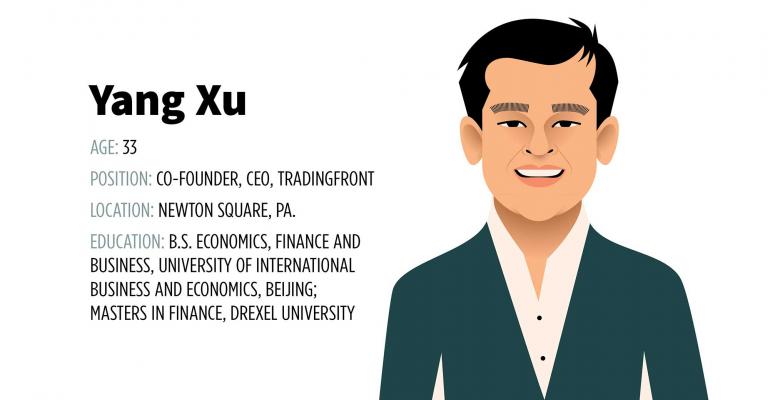 Yang Xu's TradingFront was built, at least for now, to serve the needs of small to midsize RIA firms and breakaways looking to set up shop.

Yang Xu’s enthusiasm for the markets and financial services is palpable as he describes his path to founding TradingFront, a low-cost, no-frills, all-in-one custodial platform for smaller independent financial advisors.

It’s the latest of several endeavors for the 33-year-old former financial advisor, and the one that may be best suited for the current times.

“I don’t want to say it, but we timed things perfectly,” he said, referring to the May 13 launch of the platform amid both the uncertainty of the pandemic and the impending acquisition of TD Ameritrade, a custodian known for attention to smaller advisors, by The Charles Schwab Corporation, where many smaller advisors fear they won’t get the same amount of attention.

TradingFront was built, at least for now, to serve the needs of small to midsize RIA firms and breakaways looking to set up shop. The company’s developers have focused on three core components most needed by advisors, including simple onboarding, trading and rebalancing, and performance reporting. These features and their interface sit on top of the core custody platform of partner Interactive Brokers.

According to Cerulli Associates research, $3.2 trillion of the total $4 trillion in U.S. client assets is held at Schwab, Fidelity and Pershing, the big three custodians. This means another $800 billion resides with other custodians, many of them niche players. RIA Channel estimates that there are close to 27,000 firms with less than $100 million in assets. These firms and others in the midsize bracket that are either dissatisfied with or unwanted by the big three custodians are the opportunity TradingFront is seeking out of the gate.

Xu graduated from college in 2009 in China having majored in finance. It was during the midst of the financial crisis with limited prospects for finding a good job. With an instinct for academics, he took the advice of some friends and left China to study in the U.S., landing at Drexel in Philadelphia, which was strong in finance, math and sciences but was also close to New York.

There, he fell under the tutelage of his professor Wesley Gray, with whom Xu would help launch Alpha Architect, managing money for a family office and several high-net-worth individuals. “It was 2010 that I first learned of the RIA industry,” Xu said. “I read academic papers for fun and for my work—10 to 20 papers a week—and I began to wonder, ‘could we actually manage money?’”

“I nicknamed him Bulldog,” said Gray, the CEO of Alpha Architect and a former Marine captain who served in Iraq. “He kind of reminded me of my Marines, you would just point him in the right direction, provide a little guidance, and poof, he would get it done.”

The business was initially run on a shoestring out of Gray’s garage, in traditional startup style.

“It was a really small team back then, only four or five of us at any given time, and I was doing academic research, asset management,” Xu said. That included building in-house technology for onboarding clients, trading and asset management, the groundwork that would eventually grow into TradingFront. “That’s how I learned—by doing everything from scratch, 15 hours a day, seven days a week, but we loved it,” said Xu.

If younger, tech-forward solo practitioners are to continue to get their foot in the door, and compete against larger, less personalized teams working with rapidly consolidating behemoths, they’ll need tools that are built for them. TradingFront may be the stone that these Davids can use against the Goliaths—inexpensive, easy to use and ready to grow with them.