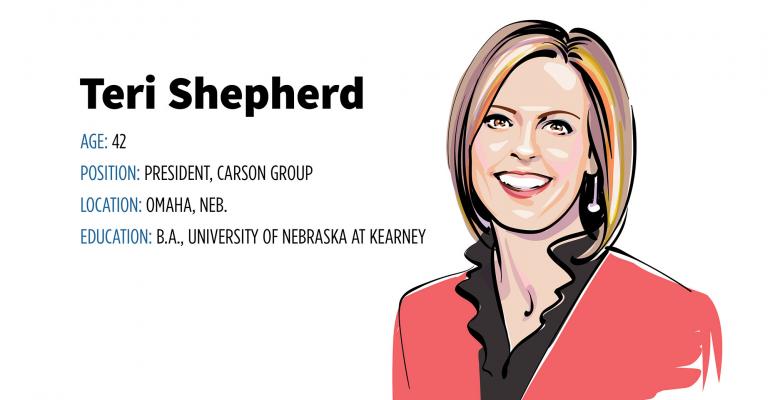 Teri Shepherd’s work in financial services is rooted in her affinity for the challenges small business owners face. Her father worked as a farmer and her husband’s family owns a small business themselves. Working with Carson Group as the firm’s chief operations officer (and, since July, co-president) is a way to help those small businesses, both the advisory firms themselves and the clients they counsel.

It’s a sizable challenge: The firm currently has more than $10 billion in managed assets, serves more than 27,000 families and has 108 partner offices. “They have to wear a lot of hats,” she said. “I want to help.”

Shepherd has worked at Carson Group since 2012 and was drawn to working there due to a coaching program that’s aided more than 5,000 advisors to date. Now, Shepherd says they’ve made gains in enabling advisors to plug directly into Carson’s system and infrastructure.

“With static systems, it can be difficult for advisors to pull together a comprehensive presentation to the client, and that’s what our game plan really is,” she said. “It helps us explain who we are and why we’re different. We are the team, and we help support them.”

In July, Carson Group announced that Shepherd would be named co-president of the firm, alongside Executive Vice President Aaron Schaben, with Shepherd focusing on institutional and retail-focused departments, “including operations, compliance, transformations, technology, communications and stakeholder development.” Shepherd praised her new co-president, saying that while their titles have changed, much of their dual roles will likely remain similar.

“I would say that Ron (Carson), Aaron and I always focus on strategy, especially as we’ve grown. You really have to lead differently, and it’s most important that we build strategy and understand what’s happening within the industry, leading Carson to focus on the things advisors need and want,” she said. “One of (Aaron’s) strengths is investments, and I focus on financial planning, and right now we’re redefining our client experience and delivering that through the tech stack we’ve built.”

Shepherd stressed the importance of digitizing the clients’ experience, noting that the Amazon-esque “click-thru” treatment they encounter in other contexts was not the same in the RIA space, to advisors’ detriment.

She also cited the lack of diversity in the industry and the low numbers of people entering the field as problem areas she wants to tackle. To combat this, Carson has rotating internship programs at a number of universities in Nebraska, and Shepherd said they hoped to launch one in Texas soon.

Shepherd’s promotion to co-president also raises speculation about succession planning at the firm; with co-presidents, the path to fill Ron Carson’s seat when the time comes seems cloudier. When asked, Shepherd drew the attention back to the work of maintaining an “adaptive and innovative” culture.

“As far as succession, I think we’re better together,” she said. “I know that we would be a part of that succession plan, with much the same roles and responsibilities we have today.”