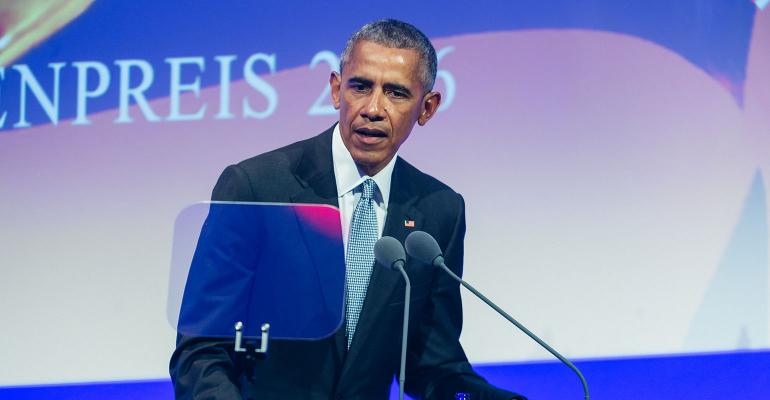 Since leaving office, Obama has delivered public and private speeches that are “true to his values.”

(Bloomberg) --Hillary Clinton says she made a mistake when she gave speeches on Wall Street after leaving government. Taking money from banks, she writes in her new memoir, created the impression she was in their pocket.

Her old boss doesn’t seem to share her concern.

Last month, just before her book “What Happened” was published, Barack Obama spoke in New York to clients of Northern Trust Corp. for about $400,000, a person familiar with his appearance said. Last week, he reminisced about the White House for Carlyle Group LP, one of the world’s biggest private equity firms, according to two people who were there. Next week, he’ll give a keynote speech at investment bank Cantor Fitzgerald LP’s health-care conference.

Obama is coming to Wall Street less than a year after leaving the White House, following a path that’s well trod and well paid. While he can’t run for president, he continues to be an influential voice in a party torn between celebrating and vilifying corporate power. His new work with banks might suggest which side of the debate he’ll be on and disappoint anyone expecting him to avoid a trap that snared Clinton. Or, as some of his executive friends see it, he’s just a private citizen giving a few paid speeches to other successful people while writing his next book.

“He was the president of the entire United States -- financial services are under that umbrella,” said former UBS Group AG executive Robert Wolf, an early supporter who joined the Obama Foundation board this year. “He doesn’t look at Wall Street like, ‘Oh, these are individuals who don’t want the best for the country.’ He doesn’t stereotype.”

Since leaving office, Obama has delivered public and private speeches that are “true to his values,” Kevin Lewis, a spokesman for the former president, said in an email. “His paid speeches in part have allowed President Obama to contribute $2 million to Chicago programs offering job training and employment opportunities to low-income youth.”

Obama’s relationship with Wall Street hasn’t always been good. Bankers still boil over with rage about him, wincing over his 2009 line about fat cats as if the wounds were fresh. But his Justice Department prosecuted no major bankers for their roles in the financial crisis, and he resisted calls to break up the biggest banks, signing a regulatory overhaul that annoyed them with new rules but didn’t stop them from pulling in record profits.

The brokerage and investment bank Cantor Fitzgerald isn’t one of those giants. S&P Global Ratings announced this year that the New York-based firm’s debt grades could be cut to junk. Cantor’s investment banking division is run by health-care specialist Sage Kelly, who left Jefferies Group after divorce-case accusations became salacious tabloid fodder in 2014. His ex-wife later apologized for the storm caused by the claims, which he had denied.

Cantor Chief Executive Officer Howard Lutnick, whose firm lost more than 600 people in the Sept. 11 attacks, said the former president will make remarks and take questions. The three-day conference for current and prospective clients begins Sept. 25. Obama will be paid about $400,000, according to a person familiar with the arrangement.

“Everybody would like to come,” Lutnick said. “Hopefully, we will really talk about the Affordable Care Act in interesting and nuanced ways, which I think is really cool.”

Obama’s appearance at the Carlyle conference in Washington was previously unreported. The private equity giant has enjoyed some of the best political connections in the world, with executives and advisers who have included former presidents, prime ministers and cabinet secretaries. Obama discussed his life and the decisions he made in the White House, the people who heard him said. A spokesman for the firm wouldn’t comment.

The ex-president has been busy. His foundation is raising money for a library in Chicago, and he and his wife signed a book deal with Penguin Random House after an auction that went above $60 million, according to the Financial Times. He spoke about food in Milan, democracy in Jakarta and himself at an A&E Television Networks event in New York. He vacationed in California and Hawaii and on Richard Branson’s Necker Island with its billionaire owner.

Obama has picked private equity, hedge fund, venture capital and banking veterans to oversee his foundation, and an alumnus of Goldman Sachs Group Inc. to advise him on investments.

Northern Trust is a bank that specializes in wealth management for rich families and services for big funds. The event had gone unreported, but a program accessible on the firm’s website lists Obama alongside executives from Microsoft Corp., IBM and Michael Bloomberg, majority owner of Bloomberg LP.

Northern Trust, based in Chicago, gave Obama a discount on a $1.32 million loan for a mansion in that city in 2005, after he was elected to the Senate, the Washington Post reported. The rate was changed to account for an offer from another lender, a spokesman for Obama said three years later. Doug Holt, a spokesman for Northern Trust, wouldn’t comment for this story.

Obama is getting advice on investments from Robbie Robinson, who’s on leave from BDT & Co., according to a person familiar with the arrangement. That Chicago-based firm works with wealthy families and is run by Byron Trott. Both bankers worked for Goldman Sachs.

Obama has known executives there for more than a decade. He spoke at the 2006 Goldman Sachs partners’ meeting in Chicago. Then a senator, he appeared between Hank Paulson and Warren Buffett in the Fairmont hotel’s Imperial Ballroom, an event program shows.

Both Bernie Sanders and Donald Trump blasted Clinton for her lucrative Goldman Sachs speeches, and the issue is still raw. Sanders and fellow Senator Elizabeth Warren have tried to pry the Democratic Party away from its coziness with Wall Street. If Obama is hoping the party will be a big tent with room for corporate giants, they may stand in his way.

Obama’s donor friends tend to mention the same reason when they defend his Wall Street speeches, saying he’s no longer president and not running for office. Morgan Stanley Vice Chairman Tom Nides is one of them.

“I love Barack Obama, and if someone is willing to pay him to give a speech, God bless America,” said Nides, a deputy secretary of state under Clinton in Obama’s administration.

But Jeff Hauser, who studies political corruption as head of the Revolving Door Project in Washington, said Obama should play by the same rules as other politicians because of his ongoing work with the Democratic Party.

“He’s continuing to exercise the authority,” Hauser said, citing Obama’s support for the party’s redistricting committee and the push he gave Tom Perez in the race to head the Democratic National Committee. If he wants to play a role, “he ought to forgo a few hundred thousand here and maybe a half-million there.”

Few leaders have left the top of the U.S. government recently and resisted the lure of corporate money. Former Vice President Al Gore is a director at Apple Inc. and a senior partner at Kleiner Perkins Caufield & Byers, the venture capital firm whose chairman, John Doerr, is on the Obama Foundation’s board. Dan Quayle, another ex-vice president, has spent almost two decades with private equity firm Cerberus Capital Management LP. Trump’s White House has lost officials so quickly that Sean Spicer has already made arrangements to speak to a financial firm this year.

“Not everyone’s going to be a Jimmy Carter, who does purely good works after he gets out,” said Sean Coffey, a Democratic donor who chairs the complex litigation group at corporate law firm Kramer Levin Naftalis & Frankel LLP. Obama is used to being criticized, the attorney added. “I don’t think getting any grief for doing this is going to bother him at all.”