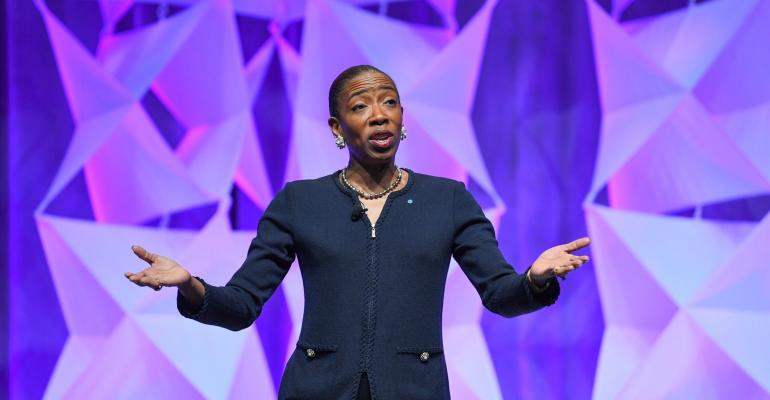 One of the most senior Black women in finance talks about her career journey and what still needs to change.

Carla Harris, 57, is vice chairman of global wealth management and a senior client adviser at Morgan Stanley in New York, which she joined in 1987. She’s also a gospel recording artist and the author of Expect to Win: 10 Proven Strategies for Thriving in the Workplace and Strategize to Win: The New Way to Start Out, Step Up, or Start Over in Your Career. She spoke with Bloomberg Markets about her career on Wall Street. The interview has been edited for brevity and clarity.

What attracted you to the finance industry?

Sponsors for Educational Opportunity [a nonprofit that offers educational and career support to young people from underserved communities]. It’s still a very prominent program today and one of the ones that I credit with getting more people of color onto Wall Street. I was in the second class, in ‘82. That summer was the summer I realized that I love finance.

I wanted to be a lawyer as I entered Harvard. Because I loved Perry Mason at the time and I loved to argue my point, everybody in my family said, “You’re going to be a lawyer.” Then all of a sudden I’m exposed to finance and I realized that the things I thought were found in the law were actually found in finance. I realized that the business people really call the shots and the lawyers help get it done within the context of the law.

I wanted to have a lot of responsibility very early on. I was 19 years old and there I was, actually working on analysis and spreadsheets upon which people were making decisions to issue millions of dollars of bonds. And, you know, I wanted to make a lot of money. And I certainly realized in finance people could do that. The other thing that was attractive is I am negatively motivated. So when you tell me I can’t do something, I was all over it. And I really did not see a lot of people of color and I didn’t see very many women. Why not? It’s not like this is that hard.

With so few women or people of color in the industry, how did you navigate early on?

Were there any pivotal moments in your career?

Yeah, I’ll tell you the big ‘A-Ha!’—I was approaching my one-year anniversary as an associate and I was sitting in my first roundtable. The roundtable was what they called the evaluation process. That was the moment I said, “Oh my God. Who’s going to speak for me if that’s how this process works?”

It wasn’t about the merger model that I did. It wasn’t the fact that my comps were impeccable. That’s when I realized I’d made a huge mistake over-investing on making sure that the work was just right, and really not paying attention to building the proper relationships and making sure that my work was positioned appropriately.

The first big pivotal moment was at that first evaluation when I got my own first feedback. It was sort of middle of the road. It was further confirmation that these relationships—and therefore the types of deals that I worked on—really mattered.

And the other pivotal thing—I was working for somebody really, really tough, [who] always made me feel like perhaps I didn’t learn enough at Harvard Business School and perhaps I wasn’t cut out for this business.

My confidence was completely busted up. If you had said, ”Your name is Carla Harris,” I would have said, “Are you sure?” That sort of bottom floor was the actual turning point for me. I started saying, “Wait a minute, why would I doubt that I could do X when my track record says I’ve done X, Y and Z?” Is it that I’m not that good? Or is it that that person really can’t teach me?

Were there significant people who helped you reach the next level?

I always took note of the people who were in my in my area, and I was in mergers and acquisitions. But there was no one person emerging at that point as the person that was going to make the difference for me internally. I did have a mentor relationship outside of the firm, and this was somebody that I continue to talk to today. She’s another woman of color. She’s in a completely different industry, but she understands my context. And that’s when I started getting more and more comfortable having some of those conversations with her externally. The one thing that a type-A personality does not know how to do very well is to ask for help. It’s tough to raise your hand and say, ”I don’t feel like this is going the way I want it to go.”

What kind of biases did you encounter on the way up?

It’s hard to say what bias was there because you really have to have some kind of vision into somebody’s head, right?

This is, in fact, something that I counsel women and people of color about all the time. I say, “Don’t get yourself distracted with interpreting other people’s looks, the comments they make, the expressions on their face. Don’t convince yourself that they’re thinking X unless you are clairvoyant. You don’t know that they’re thinking X, and it’s easy to get yourself distracted with all of this narrative that you create between your left ear and your right ear.” So I try to tell people, don’t do that.

I certainly was guilty of doing that when I first started out. I said [to myself], “You’ve got three strikes against you. You’re young, you’re a woman, and you’re Black.” I was the youngest in my class at the time. The Black and the woman part—that came from my own bias, frankly, coming from the South. I just assumed that these were going to be things that I had to work through. And so I carried that burden myself. Now, I’m not saying that it wasn’t real in every case. But I carried it, assuming it was, in every case.

I would meet clients, and the conversation would go like this:

And I remember thinking a couple of times, you know, in those early M&A transactions: How did I do? Would they really be asking one of my colleagues that?

And finally I was like, wait, you can’t do that with every single person. You can’t have that chip on your shoulder. It’s creating baggage.

The data show racial diversity is still lacking in finance. How would you explain that?

The reason why I think we aren’t farther along in financial services broadly—and certainly Wall Street particularly—is that I feel that diversity has been a bull market phenomenon. When things are going really well, then people are focused on it. They are spending lots of money, lots of resources, big spotlight on building the pipeline and getting lots of entry level folks of color. And then when you have a bear market environment, you have restructurings, you have reductions in force, and obviously small populations are disproportionately hit. And then when we get back into an upturn, that’s when you look around and you go, oh, my gosh, where’s my pipeline? And you’ve got to start all over again.

I am first to say that we have made some progress. Because it used to be so gnarly that I could name every [Black] person on Wall Street, let alone every senior [Black] person on Wall Street. And I am happy to say that I cannot do that today. So, by definition, we’ve made some progress. But we are way behind where we could be if we had had, you know, a regular rhythm with respect to people of color and women from, I’d say, 1990, ‘92, which is when most firms started really focusing on it. Up until now, if we had kept that cadence, we’d be a lot further along.

To contact the author of this story:
Sonali Basak in New York at [email protected]

To contact the editor responsible for this story:
Christine Harper at [email protected]
Stryker McGuire