His other quotes about money include:

Will Rogers (1879–1935) was an American humorist, actor, cowboy, newspaper columnist and social commentator from Oklahoma. Best known for saying “I never met a man I didn’t like,” Will Rogers had many pithy quotes about money, including:

Sir John Templeton (1912–2008) is widely considered to be one of the greatest investors of the 20th century. He is perhaps best known as an early proponent of contrarian investing, betting on growth opportunities beyond the United States. Other Templeton quotes include:

The author of Rich Dad, Poor Dad and over 20 other self-help books, Robert Kiyosaki (born 1947) is a financial educator known for his “get rich quick” philosophy. One of the most quotable authors about money, Kiyosaki once said, “There is a difference between being poor and being broke. Broke is temporary. Poor is eternal.”

Joan Alexandra Molinsky (1933–2014), known professionally as Joan Rivers, was an iconic American comedian and TV host whose comedic persona usually turned her acerbic wit on herself. Other quotations by Joan Rivers include:

Peter Lynch (born 1944) is a highly regarded investor, mutual fund manager and philanthropist. As the manager of the Magellan Fund at Fidelity Investments between 1977 and 1990, Lynch averaged a 29.2 percent annual return, making The Magellan Fund the best-performing mutual fund in the world. In his many books such as One Up on Wall Street, several Lynch money quotes pop out, including:

John Clifton “Jack” Bogle (1929–2019) was an American investor, business magnate and philanthropist. As founder and chief executive of The Vanguard Group, he’s credited with creating the first index fund. Here are two more of his quotes:

John C. Maxwell (born 1947) is an author and speaker who is primarily known for dozens of books on leadership, including The 21 Irrefutable Laws of Leadership, and its many spinoffs. Maxwell is a top management and leadership expert and a popular keynote speaker. Here are two more of Maxwell’s money quotes:

Oprah Gail Winfrey (born 1954) is, perhaps, the most influential woman in the world. An American talk show host, actress, author and philanthropist, she is best known for her talk show, The Oprah Winfrey Show, which was the highest-rated television program of its kind in history. Oprah’s observations about money and success have inspired millions. Here are just a few:

Dorothy Parker (1893–1967) was an author, poet, critic and razor-sharp satirist. In Hollywood, her scripts won two Academy Award nominations until her involvement in left-wing politics resulted in her being blacklisted. Some of her other most quotable quotes:

Ralph Waldo Emerson (1803–1882) was a philosopher, essayist and poet who had a profound influence on American letters. He was a leader of the transcendentalist movement of the mid-19th century. Today he is best known for his essay Self-Reliance. Emerson’s most celebrated quotes include:

John Kenneth Galbraith (1908–2006) was an economist and author who wrote The Affluent Society, one of the most influential books of the 20th century. Unlike most economists, his writing was fluid and creative, giving the world such phrases as “conventional wisdom,” a quality that he distrusted. Galbraith had a way with quotations that revealed his skepticism about the rationality of humans:

There is little argument that Warren Buffett (born 1930) is the most successful investor in history. Known as the “Oracle of Omaha,” he has thousands of followers that hang on his every word. Buffett runs Berkshire Hathaway and has a net worth of over $100 billion. Other Buffett quotes about money include:

Malcolm Forbes (1919–1990) was most prominently known as the publisher of Forbes magazine. An ardent collector of quotations (the last page of each issue of Forbes magazine presented quotations that caught his eye), he is credited with many original thoughts, including:

Benjamin Graham (1894–1976) was a British-born American economist and investor who has influenced virtually every successful investor. He is widely known as the father of value investing. His influence has been noted by Warren Buffett, Irving Kahn and Sir John Templeton. Here are just a few of his most enlightening quotes:

Julius Henry Marx (1890–1977), known worldwide as “Groucho,” was known for his quick and acerbic wit as a comedian and actor. A book could be filled with his witticisms about money:

Gabrielle Bonheur “Coco” Chanel (1883–1971) was a French fashion designer and, as the  founder of the eponymous Chanel brand, one of the world’s most celebrated businesswomen. Her signature scent, Chanel No. 5, remains an iconic product a century after its introduction in 1921. Her observations about money include:

Michelle Singletary is a nationally syndicated personal finance columnist for The Washington Post. Her award-winning column, “The Color of Money,” is syndicated in dozens of newspapers nationwide. She is the author of three books, including The 21-Day Financial Fast: Your Path to Financial Peace and Freedom and Spend Well, Live Rich: How to Get What You Want with the Money You Have. Some pithy quotes from her books include:

Michael Tyson (born 1966), nicknamed “Iron Mike,” is best known as a professional boxer who competed from 1985 to 2005. Tyson is considered to be one of the greatest heavyweight boxers of all time. Tyson’s observations, ostensibly about boxing, have surprising relevance to financial advisors. His point about the fragility of planning in the certainty of adversity is familiar to all advisors. 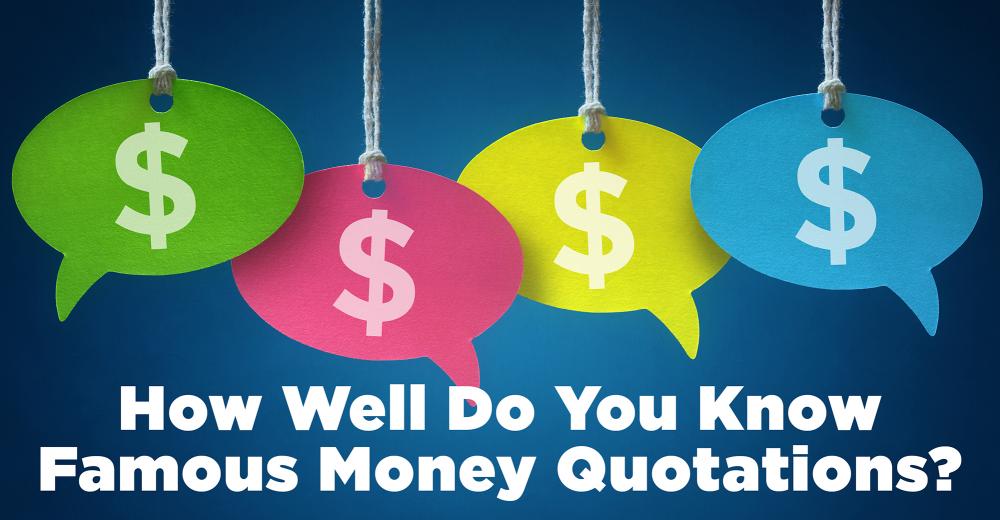