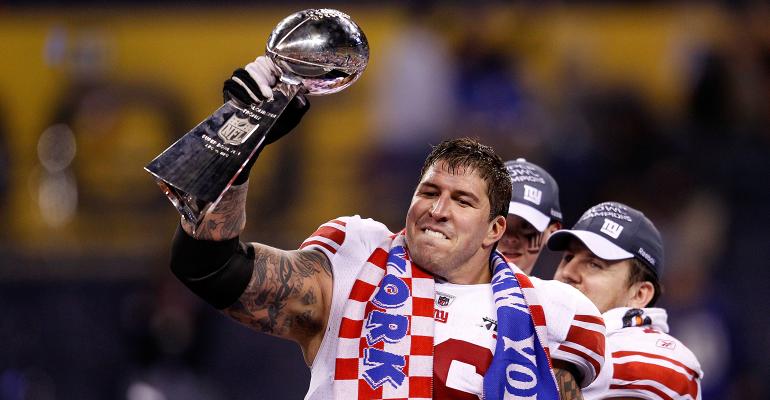 Even amid a pandemic and in the face of an economic fallout, Altium Wealth is betting on a two-time Super Bowl champion.

Pandemic or not, David Diehl, the 39-year-old former offensive tackle for the New York Giants and newest member of Altium Wealth, says his ultimate game plan keeps him sturdy.

"David, throughout his career, has exhibited a passion and commitment often seen in people who achieve the highest level of success in their profession," said Altium's managing director, Anthony DeStefano, in a statement. "Those character traits paired with a compelling desire to help others succeed has enabled him to have a seamless transition into the financial industry."

Diehl will join the firm with $1.6 billion in assets in Purchase, N.Y., as a member of its client relations and development group. He'll be responsible for assisting clients in assembling their financial services team and navigating Altium's proprietary customer relationship platform, Vantage Point. Though he says he's committed to his current role, his ultimate goal is to qualify to become a financial advisor at the firm.

"It's a different structure, but this is something that I prepared myself for after playing 11 seasons with the New York Giants," said Diehl, who had been a customer of Altium for two years before deciding to join the firm.

Diehl retired from the NFL in 2014 with more than 25 internships under his belt. He said that once he became an NFL veteran in 2008, he started preparing for life after football. Diehl earned a degree in communications and education from the University of Illinois and started putting it to work all the while continuing to play out his football career. He's dabbled in being a games analyst for NFL on Fox, he was on the oils commodities desk for a few weeks and he got his real estate license.

"When I chose to walk away from the game, I had a game plan, and I had options too," he said. "When you're a professional athlete, you better have a game plan for your body."

The motivation to go into financial services came from watching his former NFL peers. He said he's seen the perils players face when they have a team of professionals that include an accountant, lawyer, contract negotiator and insurance advisors, but none of them are communicating with each other to ensure the player has the best outcome. It's the coming together of those respective sub-teams that make the team successful, he said.