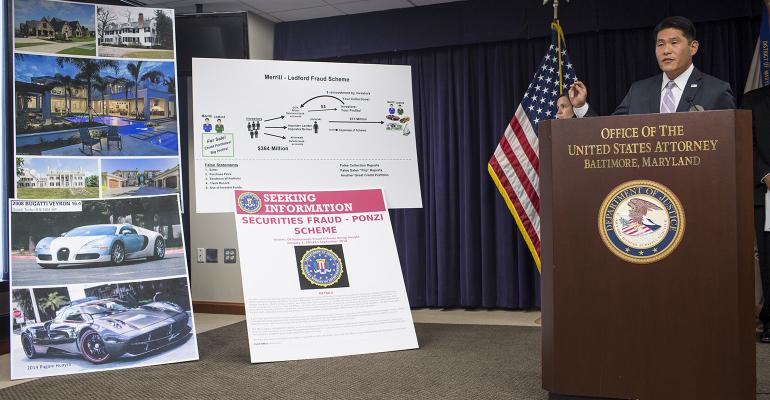 Defendants told investors they were buying portfolios of bad consumer debt; instead money went to a multimillion-dollar sports car collection, casinos and jewelry.

Kevin B. Merrill, 53, of Towson, Md. and Jay B. Ledford, 54, of Westlake, Texas and Las Vegas, along with 28-year-old Cameron R. Jezierski of Texas, were indicted by the United States Attorney for the District of Maryland on 14 counts, including charges of wire fraud, conspiracy, identity theft and money laundering. The Securities and Exchange Commission also issued a complaint over the scheme.

The trio allegedly convinced their victims to invest in a variety of entities they established to purchase portfolios of bad consumer debt, touting their ability to profit from the investments by collecting on the debt or selling the portfolios to a third party.

The defendants instead used new investor money to pay off older investors, as well as fund lavish personal lifestyles.

According to the SEC, Ledford misappropriated at least $40 million of investor money, transferring $17 million to a personal bank account and purchasing a $368,000 Ferrari, a $330,000 seven-carat diamond ring and a $168,000 23-carat diamond bracelet. He also is alleged to have transferred $13 million to casinos.

They did make payments of some $197 million to investors, most of which was money from new investors, not profits on the investments. “As a result,” the SEC complaint says, “many unsuspecting investors were victimized repeatedly and referred other prospective investors to defendants.”

According to the SEC’s order halting the scheme, there were over 230 investors involved, including $90 million from individuals and $52 million invested by family offices. Nearly $203 million came from feeder funds, mostly through individuals. The U.S. Attorney’s office says some 400 individuals were affected by the scheme, including small business owners, construction contractors, accountants, bankers, professional athletes and financial advisors across Maryland, Washington D.C., Northern Virginia, Las Vegas and Texas.

The indictment alleges the trio would induce investors by misrepresenting who they were buying the debt portfolios from and how much they were paying for them, and their own track record.

“Federal prosecutors, FBI agents, and our SEC partners together interrupted an ongoing fraud scheme, with the potential to victimize even more people. According to the indictment, the defendants lured investors through an elaborate web of lies, duping them into paying millions of dollars into this Ponzi scheme,” said U.S. Attorney Robert K. Hur, in a statement. “Most of these investors are just learning that they have been victimized.”