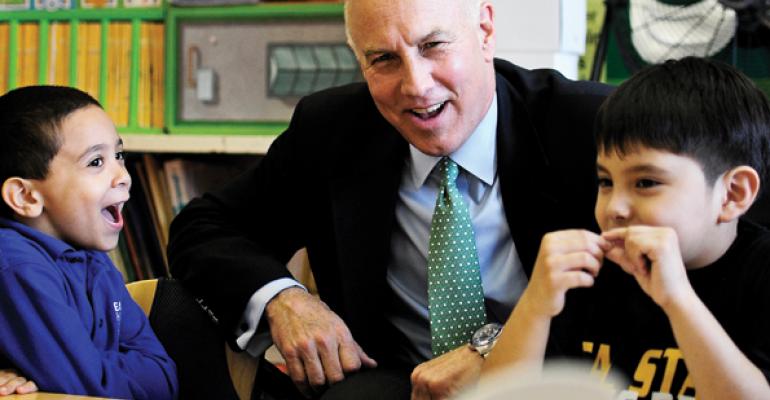 Michael Brown grew up in the middle-class town of Paramus, N.J., where the high school graduation rate was about 98 percent and taxpayer dollars funded a high-quality public education system. He was a trustee of the school board there for 21 years.

But when he moved to New York City in 2007, he came across a whole different educational system. He found the quality of a child’s education seemed to be directly tied to the neighborhood where they lived. Oversized classrooms, often indifferent teachers, the seemingly intractable social problems that make learning in a safe, peaceful and stress-free environment difficult.

“If you tell me the ZIP code of where a kid lives, I can probably tell you what the outcome is going to be,” Brown says. “Clearly our educational system is failing kids in city schools.”

Brown found his mission is to try and help fill that gap, and he is starting in East Harlem, home to some of the lowest test scores in the city and a 21 percent high school graduation rate.

He has been on the board of trustees for the East Harlem Tutorial Program for several years, and he was one of the founding members of the East Harlem Scholars Academy, a charter school that opened in 2011. The academy has 150 kids, chosen by lottery, across three grades. Next up is a second charter school slated to open in September, East Harlem Scholars Academy II, which will have about 100 students in kindergarten and first grade.

Getting a charter school off the ground is no small feat. It involves filling out a 350-page application with the state, developing a curriculum, creating financial models and policies and procedures manuals, interviewing with the charter board of the state, and hiring staff.

Brown’s work mainly involves policymaking, advocacy and fundraising for both organizations. He visits the academy twice a month to sit in on classrooms, and he mentors high school students from the tutorial program, helping them with résumés and college applications.

The academy provides holistic education for the children—with classes in English, Spanish, physical education, art, math and science. There are only 25 kids per class. The school runs on an extended day schedule—from 7:30 a.m. to 5 p.m.

One measure of success? In the most recent school year, every one of the program’s 21 seniors went to college.