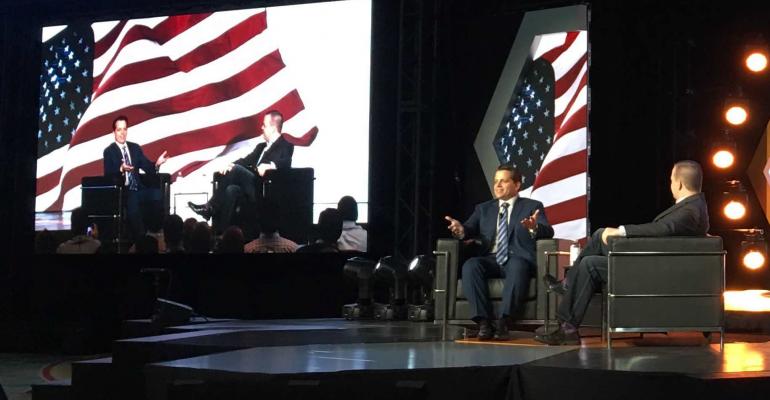 Lessons learned and a market outlook from a former communications director of the Trump White House.

Calling for a “fresh dose of civility” in front of a star-spangled backdrop, Riskalyze co-founder and CEO Aaron Klein recently sat down for a conversation with Anthony Scaramucci, leading a wide-ranging conversation at the Fearless Investing Summit in San Antonio, Texas. With his background in private wealth management and having founded SkyBridge Capital, Scaramucci also had a famously short stint as communications director in the Trump White House—topics that were all addressed in the hour-long conversation.

Discussing the DOL’s abandoned fiduciary rule, Scaramucci said the rule was actually “against the interest of the clients” because it was putting the federal government in charge of asset allocation. Pointing to the bond ladders he constructed in the past, Scaramucci said that a commission paid at the beginning of the ladder was cheaper for the client than paying for asset management fees. “In so many different ways, it was clearly off the mark,” he said of the rule.

He noted that his stance to repeal was controversial. “I didn’t think it was the right rule for our industry,” he said to applause from some advisors. “People don’t really understand the rule. They hear the word ‘fiduciary’ and they think, ‘Well Anthony’s out there saying he doesn’t want people to be fiduciaries.’ That’s not the case.”

Klein agreed with the criticism. “It was looked at as unworkable,” he said. “Like, right objective, wrong way to get there.”

A “standard of care” rule is needed, noted Scaramucci. “The ‘standard of care’ should be that we are treating our client’s money the way we treat our own money.” He stated, for example, that at SkyBridge he never had a personal trading account.

New regulation is best developed by industry insiders, added Scaramucci. His approach to a “standard of care” would see a rotational group of representatives from independent registered investment advisors, banks and wirehouses meeting with regulators and providing the appropriate guidance. “Unfortunately, a lot of people in Washington are academics or lawyers,” he said, “and they don’t really have the real-time trade skills.”

The conversation eventually turned to Scaramucci’s time working with President Donald Trump. “Don’t put your pride and your ego into your decision making,” warned Scaramucci. “That was my mistake.” His approach to politics came from an entrepreneurial direction, not a political direction, which ultimately led to his 11-day tenure as communications director, he said.

As an entrepreneur Scaramucci took his firing in stride. “It’s not the 11 days, it’s what you do on the twelfth day that really matters,” he said, addressing the conference attendees. “It turns out I’m like Mayhem on the Allstate commercial.”

“You’re an RIA out here or you’re an advisor, you’re fighting like a [Navy] SEAL every day for your clients,” added Scaramucci. “I can’t tell you how many times I’ve had to hold clients’ hands through a rough patch in the marketplace because us in the industry, us as professionals, can see them through that.”

As the hour came to a close, Scaramucci provided a brief market overview. “I don’t think we’re in the last gasp of the bull market yet,” he said, citing the tax cuts that were passed earlier this year. “I still think the fundamentals are there.” The bond market, however, is something to keep an eye on, he said, noting that he’s taken a little more defensive strategy on fixed income.

Following his foray into politics, Scaramucci seemed glad to be back on Wall Street.