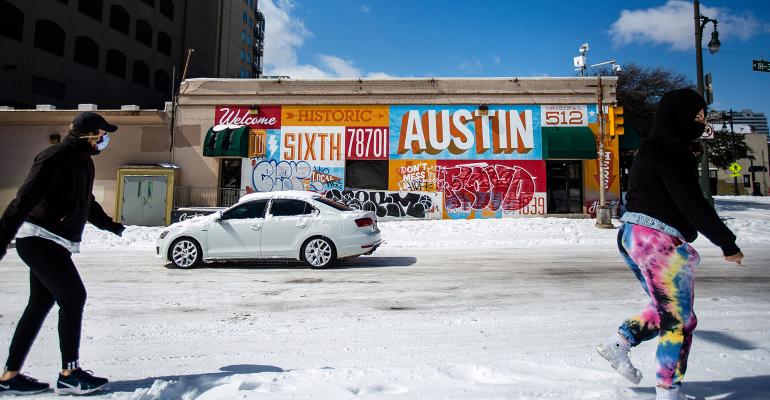 Snow is not new to Texas. It gets it every year, but it's usually a dusting. The last serious snowstorm was 10 years ago, but residents say this year is the first time they’ve experienced consecutive snow days mixed with ice, freezing temperatures and rolling blackouts.

The storm started Feb. 13 and lingered for several days, covering major cities such as Austin, Dallas, El Paso and San Antonio, which received 4+ inches. A few days in, nearly 4 million people throughout the state were without power. Wealth managers in Texas took to social media to alert their peers of their surreal misfortune.

Kashif “Kash” Ahmed of American Private Wealth in Boston flew to Austin last Friday to purchase some real estate. From the forecast, he knew the weather would be cold but figured his Northeast background was enough preparation. It was, until the city shut down.

Texas entered a state of emergency and thousands of flights were canceled. Ahmed was stuck nearly 2,000 miles from his home.

Not the weather I was expecting in #Austin #Texas !

“People are without food, water and shelter, and it’s just ridiculous,” he said. “The other day, I drove around for about 4 1/2 hours trying to find anything. I’m even willing to rummage around in a dumpster to find some food. Nothing was open.”

Ahmed survived off of snacks. He, luckily, had a few granola bars packed in his luggage that held him over. Then, one day, he waited in line at a gas station to be price gouged for $10 to munch on a single bag of Chex Mix.

When Ahmed ran out of gas, his hotel owner fetched some fuel for him. Ahmed said he’s unsure where the owner got it from, but he was able to charge his phone and drive around, if needed.

The state of his hotel stay was another pain point. With no generator, his room was frigid and there was ice on his windows. He slept under three blankets and went without a shower for a few days because of the cold. The predicament intensified when the hotel’s water shut off and the ceiling began to leak. Ahmed reached the end of his rope and opted for an Airbnb that had heat and power but no water for $250 a night.

In the northern part of Texas, Dallas-based advisor David Caviness said he didn’t expect his vacation in the Colorado mountains to follow him home.

“This was the first time we’ve ever had a deep freeze. This is new for a lot of people,” he said.

Caviness, an LPL advisor, and his wife and children spent half of their days without power bundled up and huddled around their fireplace with meals cooked on their gas stove. The other half was spent tending to a Texas client who was in the middle of purchasing a home.

He was able to charge his devices in his truck, but with nearby cell towers also suffering from power outages, Caviness didn’t have enough service to get online for work. He had to drive to his office, which was unaffected and had operational cell towers, to create a Wi-Fi hot spot from his phone.

Caviness said by Wednesday his family had power and heat again. His personal takeaway was be proactive to heed the warnings. But from a business standpoint, he said risk management plays into more than client portfolios, but internal operations, as well.

“I’m dependent on connectivity—the internet—just to do our day-to-day operations. For me my back up has always been having a hotspot to get online. There was certainly a situation here when even that was not working. That’s something we’ll have to look into,” said Caviness.

Caviness leaned on his assistant, who lives in a part of Texas that has had power and regularly reached out to LPL for additional needs. Ahmed was able to continue his business through his assistant, as well, and he said they were getting things moving along as best they can.

Charles Schwab, which is in the process of moving its headquarters from San Francisco to Westlake, Texas, also had a rough go in the past week. The company shut down its Austin and Dallas-Fort Worth campuses through Friday. In a statement, Schwab said it was adjusting workloads in impacted areas “so those in Texas can focus on their safety, and that of their families, first.” It’s also pinpointing its travel department to help employees find lodging, transportation and warming stations throughout Texas.

The Electric Reliability Council of Texas (ERCOT) announced Friday that it didn't need to force additional outages starting Thursday night, hinting at a possible end to the rolling blackouts.

The two advisors said they did what they could to help those they saw in need. Ahmed said he helped people whose cars were stuck on the side of the road and would have liked to also provide food if he had any to provide himself. Caviness gave away firewood to his neighbors and clients.

“There are others who are in worse situations and just making sure I can help where I can,” said Ahmed who plans to fly home Friday.

This story was updated to include more accurate language around the frequency and volume of snow the state of Texas receives.